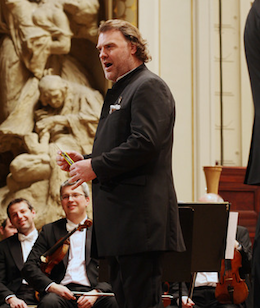 “I feel very liberated,” he told the audience.

Small wonder. This month, the great Welsh bass-baritone is appearing in the title role of Falstaff at the San Francisco Opera — a demanding role that requires him to wear a fat suit with a belly so enormous you wonder how he can haul it around and sing at the same time. (He does, with characteristic power and beauty.)

Terfel’s return to the Bay Area has given vocal aficionados plenty to celebrate. His Falstaff (at the War Memorial Opera House through Nov. 2) is a signature role, one he’s refined over the years to brilliant, precisely choreographed perfection, and his star turn in Verdi’s opera amounts to the company’s biggest casting coup of the fall season.

Terfel is also an outstanding recitalist, and Sunday’s event, presented by the Green Music Center at Sonoma State University, found him in top form. Out of character, he is always wonderfully himself, and in this appearance — his first in the beautifully resonant acoustic of Weill Hall — his warmth, charisma, and interpretive skills were on impressive display. The program of British sea songs, lieder by Schubert and Schumann, and Celtic standards was sensitively accompanied by pianist Natalia Katyukova.

Terfel’s voice — large, pliant, beautiful throughout his range — remains one of the wonders of the music world. His phrasing is seamless, his control of dynamics complete; at full throttle, he sings with astonishing power, but he is also capable of producing soft, rounded notes that simply melt into silence. Any fears that his work in Wagner’s operas had diminished his voice — he’s spent the better part of the last four years singing Wotan in the Metropolitan Opera’s Ring cycle — were quickly put to rest.

Terfel’s voice — large, pliant, beautiful throughout his range — remains one of the wonders of the music world.

Beginning the program with a set of songs on texts by poet John Masefield, Terfel entered his vocal sweet spot immediately, as John Ireland’s “Sea Fever,” “Vagabond,” and “The Bells of San Marie” afforded him opportunities for pointed phrasing and vivid word painting.

In the second half, Terfel made a smooth transition to lieder, beginning with Schumann’s “Die beiden Grenadiere” (The two grenadiers).  Emphasizing the martial evocations that so influenced Mahler, his superb diction and headlong delivery were persuasive; Schumann’s “Widmung” (Dedication) and “Du bist wie eine Blume” (You are like a flower) brought an artfully shaded response. He relished the comic possibilities of the composer’s “Mein Wagen rollet langsam” (My carriage slowly rolls) delivering the song with a slightly manic edge.

Even the Celtic songs — “Passing By,” “Danny Boy,” “All Through the Night” (sung in Welsh) and “Loch Lomond,” which closed the second half — lacked any trace of self-indulgence. Terfel finds beauty and depth of feeling in every one.

He and Kutyukova returned for three encores, beginning with “The Green-Eyed Dragon” and “Home on the Range.” By then, people were calling out titles; someone suggested Wagner. “Some Wagner?” he said, then shook his head. “Farewell to Wagner, then.” He went with Flanders and Swann’s “The Gasman Cometh,” and the crowd loved it.