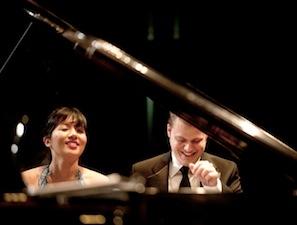 Anderson & Roe: Duo It All, With Heart

When pianists Greg Anderson and Elizabeth Roe met at the Juilliard School of Music, they both thought they were destined for solo careers. And while the solo careers are there, they’ve become known as a piano duo, playing four-hand piano as well as piano duets. They’ve also become famous for the sheer energy, drive, and imagination they put into their work. They have appeared on classical stages as well as MTV, have been talked about on NPR, and are becoming known for their music videos on YouTube.

A list of their accomplishments and projects, both together and solo, would take forever. To get a taste of what they’re like, take a look at their collective website, or his (choose the yellow polka-dot pill on the bio page for an unusual look at Anderson’s career), and hers. Check out their thoughts on their programs, music videos, and Juilliard-versus-Hogwarts in the interview below. Spend some time watching their videos and listening to their recordings. The best way to know them, though, is to see them in person. Fortunately, they’ll be in San Francisco at the beginning of July.

You’ll be participating in the Salkind 4th International Piano Duo Festival. Dual-piano performances are fairly unusual. How do people react when they are exposed to them?

Roe: People react in a great way. The piano tradition is quite rich, but in recent decades the number of performances has fallen. Now there is a resurgence of duo pianos.

Anderson: They react really well. They come in with such an open mind and lack of expectations. They’re willing to go on a wild ride with us and enjoy themselves.

You’re known for your wild rides.

Anderson: We like adrenaline. We also like sublime, quiet, beautiful moments. We like to express the full scope of life, from joys to sadness to madness. We want to encapsulate all of it.

I’m always interested in how musicians come up with programs. How do the two of you work together on particular programs, especially with such a broad repertoire?

Roe: Luckily, we both have really broad tastes in music. The festival has a theme, so we’re able to select pieces that speak to that theme. It’s the year 1912.

Anderson: Paris at that time.

Roe: Paris was the hot spot for culture. It’s incredibly inspiring. The time was great. The music was great. We enjoy exploring the repertoire in general, orchestral, songs — all sorts — and find pieces that resonate with us.

Anderson: We’re really lucky. With 88 keys times 2 and 20 fingers, we can play virtually anything our hearts desire. There’s wonderful exploration! It can be daunting and so delightful and so open-minded.

We want the videos to encourage people to listen differently to classical music — to approach it with more open ears and eyes. – Elizabeth Roe

Are you living in the same city now?

Anderson: We’re on opposite coasts. I moved to L.A. a few weeks ago. My husband is beginning his residency in emergency medicine at L.A. General [Hospital]. I’m looking forward to Liz visiting. I’m loving California. We’ll be bicoastal, and we’ll get together.

I realize musicians do have to practice apart and then come together for rehearsals, but with four-hand piano, there’s that added dimension of choreography so you aren’t running into each other. How do you work that out?

Roe: When we’re together on tour, there’s time to rehearse. Of course, we practice our own parts. We’re in constant communication anyway. With our long-standing friendship, it’s rather organic and instant.

Anderson: We’ve been lucky. We didn’t need to work on playing together too much. We thrive on spontaneity and living in the moment. We both believe that the music should be what’s happening in that moment. We don’t make too many plans. We trust each other. When we think and question, that’s when …

Roe: Exactly. Our friendship comes across in our performances, and the music-making enhances our friendship. That is essential.

Anderson: As a music listener, you can sense the dynamic: Listen to the dialog and exchange [between the two, as part of their friendship]. That wouldn’t happen if it’s artificial. It’s true joy.

We like to express the full scope of life, from joys to sadness to madness. We want to encapsulate all of it. – Greg Anderson

I’m sure when you first heard of each other, and then first met, you never expected this collaboration.

Roe: Life is the adventure. It just started out so naturally. One’s natural inclination as a musician is to play with other musicians. It was enjoyable and inspiring and fun, but never part of the plan before Juilliard.

Anderson: Everything has been very organic: the music videos, the websites. Our motive, really our mission [including energizing classical music], hasn’t changed. Circumstances have surprised us. But we would have had the same mission with simply solo careers.

So, I have to ask: You competed against each other on TRL for the Harry Potter competition?

Anderson: We were at Juilliard as students. It was a trip to Total Request Live [an MTV series], and Liz and some other friends dragged me along. The scouting agents independently selected Liz, me, and others for a game show. It was the most ridiculous experience of my life. We were the top two finishers, and I won, but we both knew it didn’t matter because the winner would take the other to the premiere of the third Harry Potter movie in London [the prize].

What about the Goblet of Fire experience?

Roe: That was a weeklong internship.

Anderson: It was another game show that I won through dumb luck. I was interning on the set for 10 days. MTV filmed much of it. It was amazing. Daniel Radcliffe and Emma Watson were so generous and so nice, even when the cameras weren’t on. Dan asked for a CD. I couldn’t believe how well adjusted they were.

Roe: It was ironic. We often compared Hogwarts to Juilliard because it was such a specialized place, with everyone going to these classes. And it seemed like the personalities are larger than life.

Maybe Juilliard is the U.S. version of Hogwarts?

Also, what are the long-term effects of watching all six Star Wars episodes in three days while eating pizza?

Roe: It gave us an appreciation for the epic scope of the movies. It’s like a multipart novel. You see how things relate to each other. It also gave us an appreciation for the music and how that really enhances the story. You see how moviegoers associate characters and events with the music. It was a fun bonding experience. We were on spring vacation, having a respite from classes.

Anderson: We were so busy then. We’re always busy, but that was “school busy.” We’re talking about watching them again.

Roe: That was a prime example of “Greg–Liz interaction”: food and fun and good music and such intense involvement.

Anderson: We go full-tilt at things. Nothing is half-baked. All the music videos, we do with the same devotion. We go to Lowes and Home Depot and craft stores, and watch other videos, eating food and putting it together.

We enjoy making them, but we want them to work specifically for YouTube. In a concert hall, you’re focused on the music; it’s quiet, perfect for listening. On YouTube, there are the related videos, comments, ads, and links. We look for an attention-grabbing element and to enhance the music in a visual way. Like with Libertango: It shows the similarities of four hands on the keyboard and four feet on the dance floors. And in Der Erlkönig, the relentless pursuit and terror.

Roe: Making the videos is great. Music is multidimensional, and both the sensory [elements] and visually watching the people tap into another dimension are inherent in the music. We approach the videos and discover something new in each piece.

Anderson: There have been only a few classical music videos in the past 100 years. The popular music genre is generally what is done. But classical music is so explosively imaginative, with so much to it inside and out, that the possibilities for videos are limitless. I look forward to seeing some very wild stuff.

Roe: We also want the videos to encourage people to listen differently to classical music — to approach it with more-open ears and eyes and to explore it instead of thinking of it as being intimidating and remote. This whole experience should make you feel something powerful, in your bones We hope they get to know that there is so much life to this music, the performers and composers.

Moving back to music, are there any other musical instruments you wish you could play?

Roe: I bought a guitar, and I really wish I could play it well. I only know about six chords. I’d like to be some sort of troubadour, like Joni Mitchell. Or rock out on an electrical guitar. Or, for a classical instrument, cello. It has such a rich sound and is so connected to the body.

So you haven’t mastered bar chords on the guitar yet?

Roe: No. It’s such a different orientation. I know what I want it to sound like, but I can’t get there yet.

Anderson: She does a fairly good job. She’s serenaded me.

Roe: I’d love to try conducting, or conducting and playing.

Anderson: My mind has so much imagination, more than I can contain, so conducting seems like a natural progression. But I don’t like the idea of standing up there and telling people what to do. Some people are great at not doing that [telling people what to do], but it intimidates me. So, well, I won’t say I’ll never conduct, but now I’ll just conduct in my mind.

I played the violin until I went to college. I love the string sound. But the piano can do it all.

Roe: We both feel so thrilled to be pianists. It’s an epic instrument. So many possibilities, on the physical and tactile levels. You can do it on your own, then double the fun.

If you weren’t musicians, what would you be doing?

Anderson: I would do so much. Composing, film, videos, write my book, designing websites: all the things I’m doing now. I’m drawn into reading the sciences. I know I’d have a satisfied life.

Roe: When I was a child, I was drawn to visual art: drawing, colors, being artistic. I’m glad I picked performing. I love the interactivity. I might be writing songs and switching genres. I’d be involved in the arts rather than science; reading, maybe writing. We both love food and travel.

Anderson: I love the serendipity of life.

Roe: I feel, for most of my life, my inclination is to be a musician, but I like to view music in a larger context. Music at its best reflects the beauty and variety of life, and that’s what we hope to express.

Anderson: Come to the concerts. They’re going to be so interesting. The themes are focused, but the variety is incredible.

Roe: We both like San Francisco. It’s great to be back and eat great food.