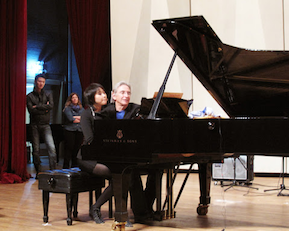 While most of us were recovering from the candy onslaught of Halloween and getting ready for Thanksgiving feasts, the San Francisco Symphony was busy touring Asia.

Although relatively short — just 14 days in 6 cities — the tour still managed to include two Symphony debut performances in Macau and Beijing, long-time-coming return visits to Taiwan (after 20 years) and Japan (15 years), and stops in Hong Kong and the Symphony’s sister city of Shanghai.

There were also master classes and a cultural exchange program; plus a continuation of the successful “season” of the Symphony softball team, aka “the Team of the Century.”

It was, according to several of the musicians I spoke with, a tour filled with enthusiastic audiences who heard wonderful and interesting music, including Mahler’s Symphony No. 5 and Rachmaninov’s Symphony No. 2, as well as pieces by American composers John Adams, Lou Harrison, and Henry Cowell.

“MTT [Music Director Michael Tilson Thomas] did a great job. It was interesting to see the audience react to the new music,” according to violinist Chungming Mo, who added that it was clear that “with music, there is no line. It doesn’t matter where in the world you are.” 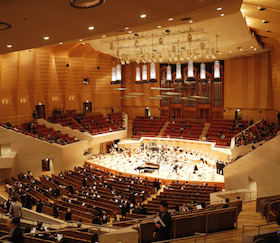 Pianist and Beijing native Yuja Wang, who joined the Symphony for the entire tour, playing Rachmaninov’s Rhapsody on a Theme of Paganini and Prokofiev’s Piano Concerto No. 2, was also an audience favorite.

In the words of cellist Margaret Tait, Wang was “very brilliant and very attractive; there’s nothing to dislike about her.”

Still, the highlight for everyone had to be the first concert at Suntory Hall in Tokyo. There, the performance of Mahler was rewarded with seemingly unending ovations.

Bassoonist Stephen Paulson cites each performance of Mahler as his personal tour highlight, but agrees that, in Tokyo, “it really communicated. It deserved it. We all felt it while we were playing.” Mo adds, “MTT had to go back out [for bows] by himself. They just loved it so much.”

“With music, there is no line. It doesn’t matter where in the world you are.” – Chingming Mo

Despite rehearsals, concerts, and classes, Symphony members did find time to do some nonmusical activities.

There was the food, of course, including the private banquet arranged for the group after the concert in Beijing.

“The hospitality was incredible,” says Tait. Mo was returning to her hometown of Shanghai, so there’s always a personal connection for her in that city, but she also felt that one of the tour’s highlights was a visit to the National Palace Museum in Taiwan, filled with centuries of Chinese art, arranged by Taiwan sponsor David Peng. 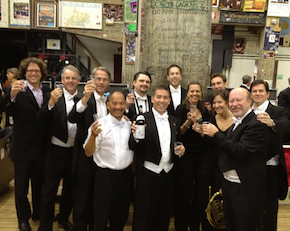 Tait arranged a guided tour for herself and four other orchestra members to the Forbidden City and the Great Wall, which they did not sled down, despite the option of a toboggan ride and the presence of some snow. She also spent time in her native city exploring the antique market, filled with lots of little tentlike shelters in front of the stores themselves and a mix of “junk” and nice pieces. “I could have come home with multiple statues of [Chairman] Mao,” she remarks.

And then there’s the somewhat little known but obviously successful softball team. This was their third outing, after playing against members of the New York Philharmonic and the Philadelphia Orchestra, and the San Francisco team won handily, receiving a bottle of sake as a gift.

Fortunately for foreign relations, the Tokyo Philharmonic softball team looked on their 23–3 loss as a good way to gain friends among musicians. There’s no word on a rematch as yet.