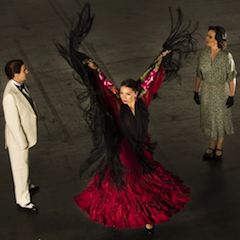 Opera Parallèle’s upcoming San Francisco premiere of Osvaldo Golijov’s award-winning opera Ainadamar (Fountain of tears) continues the company’s tradition of championing contemporary grand opera and collaboration with visual artists, including the latest video technology. As always with an Opera Parallèle production, it promises to be a spectacular mix of musical and visual styles.

This story of Spanish poet Federico García Lorca and his clash with the Fascist regime in Spain, and ultimate execution by it, is told in flashbacks through the eyes of his close friend the actress Margarita Xirgu. Just 65 minutes long, the opera is nonetheless an intense experience (for another take on this piece, see here). The music, which Artistic Director and Conductor Nicole Paiement describes as exquisite, is a study in contrasts that one comes to expect from Golijov, with Moorish inspirations and Gregorian chants augmented by prerecorded effects that range from the sound of water to gunshots.

The visual effects of the production should more than keep pace with the music. They start with a two-tiered stage that emphasizes a divide between the present and the world of the past. The stage includes sets built of perforated steel that allow for interesting lighting designs and provide a surface for the video mapping (Paiement notes that “we had the idea before the Christian Dior show opened!”). No detail is left to chance; soprano Marnie Breckenridge, who sings the role of Xirgu, was even the model for the statue of Maria Pineda that is part of the set.

Breckenridge also has the challenge of being on stage for almost the entire opera and managing the transitions from an actress aging in the present to her younger self in the past. It’s a role she clearly loves, calling the music amazing and the opera a very heartfelt story. Mezzo-soprano Lisa Chavez, in turn, sings Lorca. It’s a “trouser” role, which is, of course, common in opera tradition. Paiement feels that having a female sing the role is important. “His voice becomes universal when sung by a different sex.”

La Tania’s troupe performs: a breathtaking sight and sound to those who have not seen true flamenco performances.

And last but not least, there’s the flamenco — a true representation of the art form and well worth the price of admission on its own. Jesús Montoya, himself a flamenco singer of note, knows the role of Ruiz Alonso inside out, having toured the world performing and recording it. The orchestra includes three flamenco percussionists and two flamenco guitars, adding even more color and expanding the orchestral sound. La Tania and her flamenco troupe perform, as well: a breathtaking sight and sound to those who have not seen true flamenco performances.

Breckenridge describes the dancing of the five troupe members as originating from the center of the Earth and flowing upward through to their faces. “If nothing else,” she suggests, “come for that.”