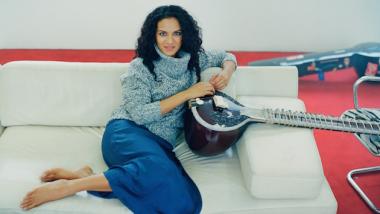 At just 37 years old, sitar player and composer Anoushka Shankar has had an amazing life. She is the daughter of Indian sitar master Ravi Shankar, who helped to popularize Indian classical music in the U.S. starting in the late ’60s. He came into the spotlight when he taught sitar to Beatles lead guitarist George Harrison and played the signature riff on Rubber Soul’s “Norwegian Wood.”

Shankar began studying sitar under her father at age nine, made her professional debut at 13, and by the time she was 20, had already recorded three classical Indian albums. Now with multiple recordings in a variety of styles under her belt and six Grammy nominations, the half-sister of nine-time Grammy-winning vocalist Norah Jones (they collaborated together on one of Shankar’s albums), is an international artist performing with symphonies all over the world and appearing at concert halls and festivals with her own Indian/world-fusion band.

Her newest album, Land of Gold, was inspired by the Syrian refugee crisis, and she has toured it around the world for a couple of years, hitting five continents and 60 countries. She is now on a special benefit tour, and will be appearing at the California WorldFest in Grass Valley on July 13. She returns locally to Stern Grove on Sunday, July 15, a place she says she is really looking forward to playing at again. In a recent chat by phone from her home in London, we talked about her latest record, her current tour, and what matters to her both personally and professionally.

You were only nine when you began studying sitar with your father. It’s a difficult instrument and not the most common for women to play professionally. Did you always know you would have a life in music?

I didn’t always assume that I was going to have a life in music — I always knew that it was a very serious contender as far as my options went [laughs]. I loved the arts, and music in particular. But while there was something very attractive about it, there was also something quite intimidating about it — for obvious reasons. I did pick up on this sense that there was a lot of expectation and hope around me playing that instrument, and so as a child, that made me hesitate rather than want to play it.

But my parents encouraged me to learn, and luckily they said to me that I had the option to stop whenever I wanted, so it gave me the chance to explore it. I did give a few years of exploring, and in that time I found I loved it — for myself.

You started in classical Indian music. What inspired you to explore other types of music with the sitar?

Indian classical music is always at the heart of the music I make, because it’s my musical root. But when writing your own music, it makes sense that that music is coming from who that person is, and if you look at who I am, it immediately makes sense. My upbringing was between London, Delhi, and California — I was constantly traveling around the world, and had a very international life. So that became the kind of music I wanted to make, because that’s who I am.

My very first crossover albums, Rise and Breathing Under Water are very heavily electronic. I was studying Indian classical music, but I was involved in the psychedelic trance scene — I spent all my Christmas holidays in Goa at raves. I was involved heavily in electronic nightlife, but then going onstage and playing classical sitar.

Several of your earlier albums utilize electronics, but then you went into a more acoustic mode. Why the change?

The reason I stepped away from it was because at the time, in the late 2000s, the technology for combining live music with electronics was not satisfying for a lot of musicians, so when I made the album, I was happy with it, but then I was really frustrated onstage, because as someone who is used to playing in a very dynamic and live way, we were very limited by playing with electronics.

And in the time that I stepped back into playing more acoustic music, that technology has revolutionized, and it’s just a completely different world now. When I realized that I could engage to a level I found inspiring and still be working with the sound palette, then I was really excited to come back and bring these worlds together again.

Tell me about the electronic effects on Land of Gold.

That’s probably the thing I’m proudest of — the live shift that we’ve managed to achieve, because we’ve been able to allow each instrumentalist to be the best that they can. And there are no loops — everything is played completely live.

Why do you think that is so important in a live concert?

It’s important because there is music I love, but when I see it live I am really disappointed. It just doesn’t translate live. I don’t want to sit in a concert hall and just watch someone push buttons all night. So that was something I really cared about when I was designing this show. It’s quite exciting to work with the technology that way, and yet still be an instrumentalist.

Land of Gold was conceived as a response to the Syrian refugee crisis, and this tour is in partnership with the nonprofit organization Help Refugees. Tell me a little bit about how you hooked up with this particular organization, and why you feel so committed to this cause.

It’s been an unfolding journey that’s very much in response to the way the world is going. There was a point in 2016 where global news was dominated by the refugee crisis and the troubling thing to me now is that the refugee crisis has in no way abated. However, because of the type of world we live in, it’s not sustainable for a news cycle to have the same story dominate for such a long period of time, so the world has sort of moved on, and yet these millions of people are still suffering to the same degree.

I’ve been working with Help Refugees for a while in London where I live, and where a lot of people who run the organization are based. So this time when we were coming back [to the U.S.], I asked them if we could turn that into something that was a little more directly supportive.

Thanks for doing that. It’s hard for a lot of us who are concerned, but don’t know what to do about it.

Many us have struggled with it in the last couple of years and we can get overwhelmed. A lot of it comes from the state of the world and the tireless influx of images and scary stories, and certain politicians coming to power. There’s a hopelessness that can make us give up, but the challenge is to learn to stay engaged in a way that also sustains us. Each individual has to find their own way to do that — and it’s hard. Just remember that with a little bit of hope and conviction, you can make some impact.