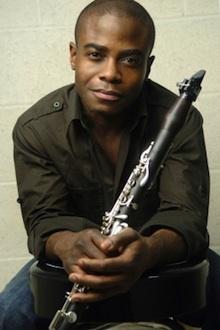 Music at Menlo, the chamber music festival that celebrates its 10th anniversary in July, was one of the first to recognize the brilliance of Anthony McGill, currently principal clarinetist of the Metropolitan Opera Orchestra. Artistic Directors David Finckel and Wu Han chose McGill to perform Messiaen’s Quartet for the End of Time, performed in the one-day pilot concert that led to the establishment of the festival in August of 2002. His meteoric rise as one of the great clarinet players of our age started when he graduated from the Curtis Institute of Music in 2000, and was immediately hired as assistant principal with the Cincinnatti Symphony Orchestra. Four years later he joined the Met, at age 25. Winner of the Avery Fisher Career Grant, he currently serves on the faculty of Peabody Institute of the Johns Hopkins University and the Mannes College of Music.

Welcome back to Music at Menlo for the sixth time. What makes this Festival different from others?

It’s one of the top chamber music festivals in the world, attracting some of the greatest musicians in the world. Listeners become an integral part of the events. The Café Conversations, Encounters, and Audio Notes give the audiences an opportunity to connect with the musicians and learn in depth about the music. And the musicians are challenged to explore new works with their colleagues.

You’ll be performing the Mozart Clarinet Quintet with the Pacifica Quartet on July 21. It’s also the background music on your website. What does this work mean to you?

It has been important to me because it’s such a masterpiece. Along with the Concerto, Mozart writes in a way that brings out the best in a clarinet player. It’s the intimacy and timeless beauty that’s so inspirational. I feel lucky to have had the opportunity to play this piece repeatedly throughout my short career. Performing this work changes over the years — you never play it the same way twice. You can listen to how you have changed as a player. Not to mention that you play it with different people each time. It’s wonderful to be able to get to know this masterpiece so well.

On July 22 you’ll be doing a Carte Blanche concert with Gloria Chien called Verlangen (Romantic longing). Can you talk about how the theme for this concert arose and the works you’ll be playing?

Gloria and I have worked together quite a few times and when we talked about possible themes, we discovered that a lot of the pieces that we’ve played have this sense of longing or nostalgia. What I’ve always loved about the clarinet has been the sorrowful sound it produces that’s beautiful at the same time. It’s a sound that can suffer, but at the same time is uplifting. One of my favorite pieces is Schumann’s Dichterliebe, and there are songs in that work that talk about “verlangen” [longing]. It’s that concept of reaching for something you can’t obtain; striving for something that is heavenly or otherworldly. Some of the music on this program captures this sense of longing.

How has playing in the Met Opera Orchestra affected or changed how you play chamber music?

Playing in the Met has allowed me to expand the way I listen. We have to listen to what’s going on behind us on stage and play our notes at the same time. There’s not a moment you can separate yourself from what is going on onstage. In chamber music the ideal way to perform is to listen 150 percent of the time to your colleagues. You try to become one with them. When I’m in the orchestra pit, I can’t see the singers. Yet, I have to try and find a way not to separate from them, so the audience hears the orchestra and the singers as one. Playing chamber music has helped me to always strive for that connection with the other players, musically, emotionally, expressively, and visually.

Is there any one opera you’ve played in that has changed your relationship with music, or moved you deeply?

Playing opera consistently for the past eight years has changed my experiences. There are a lot of composers I didn’t play a lot while with the Cincinnatti Symphony or when playing chamber music: Wagner, Richard Strauss, the great Mozart operas, Puccini, Verdi, etc. There are moments in opera when I am so moved emotionally that it almost overwhelms me. A lot of people who have never heard opera before come up to me and say that they have become addicted to it. It’s those moments they are talking about. You’re going along, playing for three hours, and, all of a sudden you feel this overwhelming sense of joy or sadness. I’ve experienced those moments a lot playing in the Met Orchestra.

You have an instructional clarinet application for the iPhone called Clarinet in Reach [from Music in Reach]. How did this happen and what’s been the consumer reaction to that?

It’s been quite a few years since a developer asked me to do this, and I thought it would be a fun thing to try. It’s a basic tool that some kids have used, and we’re talking about expanding it for more advanced clarinet students.

I was very moved by your improvisation Blues for Japan on your website (www.anthonymcgill.com), a musical tribute you performed for the Japanese earthquake victims in March, 2011. How has your attraction to improvisation affected your performance?

Although I’m so busy that the blog on my website isn’t updated as often as I’d like, sometimes I write blog posts about things that I would love to do and they actually happen. Wanting to improvise more is one of those things. I just woke up one morning and played “Blues for Japan.” Improvisation gives me a sense of freedom and confidence that carries over to my performances of music written by other people. Somehow the music comes through me more freely, as though I were improvising. Yesterday I played a piece without a score with a cellist, a didgeridoo player, and unique Indian percussionist in a program called “Make Music New York.” Playing different kinds of music has expanded my brain — it’s been fun and scary.

Have you ever composed a work?

I’ve haven’t yet, but I have a feeling that it might happen in the future. It probably would be something as simple as writing down things I play on my instrument while improvising and putting it on paper. There’s probably plenty of time for that in the future.

Now that it’s been three and a half years since your performance of John Williams’ “Air and Simple Gifts” with Yo Yo Ma, Itzhak Perlman and Gabriela Montero at President Obama’s Inauguration in 2008, what are your current memories and thoughts of that event?

It’s still like a dream for me — that I was there and it happened. I think it might be the highlight of my life. It’s something I don’t think I’ll ever experience again, and that I was lucky to be a part of such a unique and important moment in history. It was wonderful!

In your clarinet master classes on You Tube, you emphasized the importance of expressing feelings when playing. How do you achieve that as a musician?

I teach a lot now [Bard College, Peabody Institute, Mannes College of Music, Johns Hopkins University] and I have often had to articulate and define this concept. As players, we’re trying to send the musical energy from our souls and spirit through the composer’s notes and our instrument to the audience directly. We want the audience to feel something similar to the intimate emotion of what the player is feeling or what the composer would like them to hear. We want to share that musical emotion with the audience so that they come away as touched as we, as musicians, are when performing it.

What have been the highlights of your musical life in the past six months?

A real highlight was playing the Copland Clarinet Concerto with my orchestra — the Met Orchestra — in Carnegie Hall in January. It was amazing, playing with my colleagues, and I loved every minute of it. I received the Sphinx Medal of Excellence Award in March. The award was presented to me at a dinner with three Supreme Court Justices in attendance. It was fun playing the world premiere of Concerto Duo for Flute, Clarinet, and Orchestra by Joel Puckett with my brother Demarre (principal flute of the Seattle Symphony) with Chicago Youth Symphony Orchestra, as both of us are alumni of that orchestra.

What would you like to achieve in the next 10 years of your life?

One of the things I really want to get more involved in is sharing the beauty of music with children, either with organizations I am now a part of [ he is Artistic Advisor for Merit Music Program in Chicago, a supporter of the Education Through Music Program in New York and Los Angeles, the Corona Youth Music Project, and the Atlanta Music Project], or creating my own organization. Being exposed to music at a young age changed my life. Even if kids don’t play an instrument, exposure to the beauty of art and music in the world can make them more rounded and expressive human beings, no matter where they’re from or what they look like.