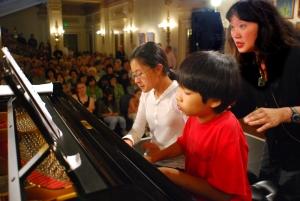 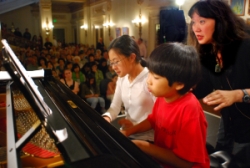 What happens behind the scenes at [email protected], the summer chamber music festival and institute that begins its eighth season on the Peninsula on July 23, is as revealing of the festival’s essence as the musical events themselves. Attendees don’t realize the extent to which the 22 administrative interns contribute to the plethora of concerts and events that make up the festival’s public persona. Their cheerful spirit, youthful zaniness, and willingness to do anything and everything help to make the festival a vibrant, summer musical destination.

“Last year, when pianist Menahem Pressler broke a piece of his luggage, I took him to a store to purchase a new one,” said Serena Robbins, an artist liaison intern. Several years ago, a musician drove here overnight from Portland, arriving at 4 a.m. at the Golden Gate Bridge, totally lost. The artist liaison intern drove to meet him and took him to the home where he was staying so he could make a 9 a.m. rehearsal. 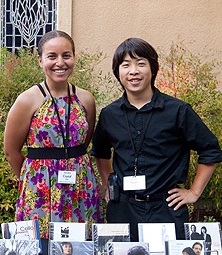 “There’s no way we could run the festival without the interns,” explains Operations Director Marianne LaCrosse, who manages the Internship Program. They whisk the visiting artists to and from the airport; set up and tear down the performance and rehearsal venues; create and maintain the complex festival concert schedules (40 performances in 23 days); market the festival CDs, posters, and materials; manage the donor events; coordinate hospitality and food concession sales; and even tape video events for the extensive archives.

The Internship Program is also a mega-learning opportunity for people who want to experience what it takes to run a music festival while expanding their interpersonal skills for three of the busiest and stress-filled weeks of their lives. “I’m exhausted!,” wrote stage management intern Brandy Lee Hatcher in her 2008 blog. “It is the fifth day since rehearsals first began and my days have gone insane. Yesterday I spent 16 hours over at St. Mark’s stage, managing the rehearsal, recording, and performance of Concert Program 1. But I learned that a festival is one big puzzle to decipher, and I love puzzles,” she added. 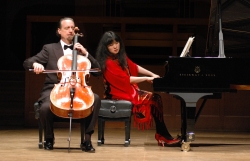 Artistic Directors David Finckel and Wu Han plan the three weeks as a training ground for musicians and administrators that replicates the busy life of professionals. “Training arts administrators by starting an internship program was a part of the design of the festival from the beginning,” stated Wu Han. “We need leaders in the arts, people who have passion and discipline, and, hopefully, we’ll create leaders for the future at Menlo,” she commented.

Fran Eastman and Edward Goodstein, through their Goodstein Foundation, have funded the program since 2004. “We felt the festival needed a strong internship program to actualize David’s and Wu Han’s visionary plans,” said Goodstein. Part of the training for the interns is a series of seminars given by the year-round [email protected] staff, which cover the basics of arts management — marketing and branding, strategic planning, fund-raising, and development. The current enterprise is an organized, sophisticated undertaking that receives calls from other festivals, asking for advice on how to set up their own internship program. 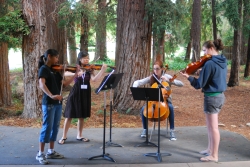 The groundwork starts late in October when [email protected] sends 10 different intern job descriptions to all major colleges and university career centers in the U.S.. Not all have musical requirements. “I found out about the stage manager internship in the summer of 2008 through a Web site,” said Hatcher, “and my experience as stage manager in high school and at Stephens College was a good match.” Asked why she chose stage management, she replied, “I loved theater but don’t like to sing; and my parents said that clearly I had to be a stage manager because I boss everyone around, anyways.” This year, 75 applicants were interviewed over the phone or in person for the 22 intern positions to be filled. Eight of the interns are returning from last year — a tribute to the effectiveness of the program. Some of the positions are matched into teams that vary from two to seven interns (the production team).

All interns arrive five weeks before the festival’s start, except the production staff, who arrive two weeks later. Although they are offered a small stipend of around $1,000, they have to pay their own travel and housing expenses. “What impressed me when I got to Menlo was the size of the program and the organization. We had laptops on the first day, and lots of information,” commented Sophie Walker, a student liaison team intern in 2008. By contrast, Hatchers’ first impression, after motoring through Atherton, was, “Gosh, these people are rich. The post-concert parties were in houses five times the size of what I’m used to in Kansas,” she commented.

Getting Down to Business

After an orientation session and a tour of the facilities, the work begins. The student liaison interns start scheduling travel and arranging home stays for the 40 students who are coming to play at the Institute — 29 in the Young Performer’s Program and 11 in the preprofessional International Program. Interns create and deliver the orientation program for the two groups; plan the table-tennis tournament; meet with “Surfer Mike” to create a yoga class for the students; and handle questions (and complaints) from parents and students. “These are children from 11 to 16, but they also are prodigies beyond whatever I hope to achieve, and you have to admire them,” explained Walker, who played bass clarinet in college.

The interns are chosen to bring their experiences and personalities to [email protected], and their contributions are many and varied. “I was good at calming someone who would be overly anxious — what do you need to be productive without being frenetic as the concert approaches?” commented Ellen Mezzera, a production manager intern in 2009, and an artist liaison intern this summer. “What I brought to Menlo was a real passion for helping people,” said Serena Robbins. “And so, assisting the world’s leading musicians was easy and exciting for me.” Sometimes, unknown skills are created from job necessities. One of the major things Walker learned was “how to interact with donors and patrons, how to balance what is going on behind the scene with the demands of ticket holders, and to communicate with them in a way that’s friendly. I learned how to develop a professional persona that represented the face of the organization,” she commented.

The combination of hard work and fun that the interns bring to [email protected] is part of the “family culture” of the festival that is a major reason for its success. “David and Wu Han have created an atmosphere where there are no divisions between the artists, students, audiences, parents, and interns,” commented LaCrosse. Every day the artists, students, and interns eat lunch together. “When you go through eight weeks of very intense activities with the same people, it becomes a bonding experience,” Walker remarked. In the after-dinner welcome to the interns, Wu Han, a noted pianist, tells the story of a woman who served as page turner for her 20 years ago and who eventually became an executive of her concert’s sponsoring organization. She thanked Wu Han for treating her so kindly when she was turning the pages of her score.

As the festival nears its end, evaluation of the activities serves as the first planning step for next year’s concerts. “Each intern team documents their work during the festival in a binder, leaving ‘tips and tricks’ for next year’s interns,” commented LaCrosse. The binder documents their own work, often in creative ways, and allows them a chance to reflect on their overall experience. The week after the festival ends marks the last week of the internship, and each team or individual intern makes a short presentation on stage about their internship. “It’s a way to give them public speaking experience and to share their experience with the staff and the other interns,” LaCrosse stated. For some, the people they met and worked with lead to future professional positions. “I stayed with the friends I met at Menlo in New York until I found a job as an intern and production assistant for Aruba Productions,” Ellen Mezzera said.

Part of Sophie Walker’s binder was a poem that she and her partner, Christina Hu, wrote in 2008. It ends:

As one, we know that the Festival ends And separate paths will follow, But we are grateful for these new friends: The staff and musicians at [email protected]