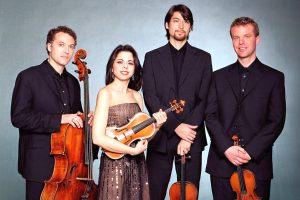 Robert Moon on July 6, 2009
“It’s easy to like chamber music because it’s a conversation between a small number of musicians — and everyone knows what talking with a small group of friends is like,” said violinist Simin Ganatra of the Pacifica Quartet, which makes its first appearance at [email protected], the three-week chamber music festival that starts its seventh season on July 17. “Some of the greatest music is written for small ensembles, and it’s easy to hear and see what’s going on. Hearing the musical give-and-take in an intimate environment makes for one of the most exciting concert experiences available for audiences today,” she added.

The theme for the 2009 [email protected] is “Being Mendelssohn.” “We chose the theme for this year not only because it’s the 200th anniversary of Mendelssohn’s birth, but because we wanted to focus on the kind of life that he lived,” commented Wu Han, pianist and coartistic director of [email protected]. She was referring to the fact that Felix Mendelssohn came from a privileged class and could have sat back and enjoyed an easy life. Instead, he composed his great Octet at age 16; was the first to conduct Bach’s St. Matthew Passion in 100 years; traveled to Italy, France, and England for three years; became the conductor of two major orchestras; and was interested in poetry and philosophy. “He was constantly developing as a musician and as a human being, and we hope his life will serve as an inspiration to our students and audiences,” asserted Wu Han.

The festival will present the composer’s greatest chamber works — the Octet, the piano trios, and the complete cycle of his quartets — as well as several other works by Mendelssohn’s predecessors, contemporaries, and musical heirs. “When we formed our quartet in 1994, we chose to start with the Mendelssohn quartets because they have some of the best writing for string quartets that exist in the repertoire,” said Ganatra. “Each part is so well-written that it forced us to deal with the issue of integrating distinctive voices into a balanced ensemble,” she remarked.

Playing Mendelssohn also became a bridge in learning to play both Haydn and early and late Beethoven. Ganatra made a point of the value of hearing the quartets as a complete cycle. “There is a misconception that Mendelssohn didn’t develop much as a composer throughout his short career,” she said, “but there is development in the string quartets.” The early quartets (Opp. 12 and 13) were written in the shadow of the late Beethoven quartets, yet they contain Mendelssohn’s distinctive characteristics: lyrical melodies, superb craftsmanship, and mature counterpoint. The middle period — the Op. 44 quartets — show his mastery of the Classical form. The Op. 80 quartet, written in the devastating aftermath of the death of his beloved sister, Fanny, reflects his anguish. “It’s full of chromaticism and points to the direction he might have gone, if he had lived longer,” Ganatra said.

In 1994 few ensembles were playing all the Mendelssohn quartets, hence few audiences knew them. That fact allowed the Pacifica Quartet to build a distinctive repertoire that provided some visibility for it in a crowded string-quartet marketplace. Eleven years later, they recorded all the Mendelssohn quartets, to great critical acclaim. “I had played the Brahms First Piano Quartet with the Pacifica Quartet earlier and loved the experience. When I heard these recordings, I was impressed with their playing, so David [Finckel, [email protected]’s other coartistic director] and I hired them,” Wu Han observed.

Shortly after the Pacifica Quartet was selected to play at [email protected], it was named 2009 Ensemble of the Year by Musical America, and then won a 2009 Grammy Award for “Best Chamber Music Performance” for its recording of Elliott Carter’s String Quartets Nos. 1 and 5. Another indication of the Quartet’s excellence was its selection to perform complete cycles of the Shostakovich quartets (2010-2011) and the Beethoven quartets (2011-2012) at the prestigious Metropolitan Museum Concert Series in New York City. Director Hilde Limondjian had been looking to fill a gap left by the retirement of the Guarneri Quartet, which had performed a series there for the past 45 years.

“I went to hear one of their lunchtime series of the Beethoven Quartets at Columbia University,” said Limondjian, “and it was an out-of-body experience for me. I was so inspired that, on the way home, I wrote two haikus on the margins of The New York Times. Their intonation together is extraordinary, their balance is fantastic, and their chords are beautifully voiced,” she enthused.

Audiences have many opportunities during the three weeks of [email protected] to experience live performances, some of them free of charge. A major aspect of the festival is the Chamber Music Institute, where students in two age ranges — 8 to 18 in the Young Performers Program, and 18 to 29 in the International Program for preprofessional musicians — have an opportunity to perform for audiences. This year the preprofessional students are scheduled to perform 13 different, complete chamber-music works, including the Mozart Clarinet Quintet; Beethoven’s Quartet Op. 18, No. 1; and the Brahms Piano Quintet. These concerts are free to the public, but they are so popular that audience members are encouraged to arrive an hour before the concerts start, to obtain their free passes.

One of the advantages of hearing performances in the context of a three-week festival is observing the close interaction between professional musicians, students, and audiences that [email protected]’s structure provides. This informal yet intense atmosphere creates an immersive experience for audiences, some of whose members return several times during a given festival. They recognize familiar faces and become part of the collegial experience.

“When things are rougher in society, as they are now, audiences become more intense in their respite,” commented Wu Han. “They come for refuge from daily worries, treasure their escape, and are looking for something more beautiful than their real world,” she mused. “A concert provides that need for comfort.” Bay Area audiences have a wonderful chance to experience live chamber music at [email protected] this summer.