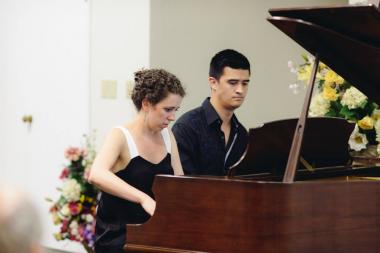 Catching Up With HOCKET

Webster’s defines the word “hocket” as “a spasmodic or interrupted effect in medieval and contemporary music produced by dividing a melody between two parts — notes in one part coinciding with rests in the other.” For Los Angeles-based Sarah Gibson and Thomas Kotcheff, it’s the name of the piano duo they founded in 2014. Hailed by The New Yorker as an “adventurous young ensemble,” the musicians are also composers dedicated to commissioning and performing contemporary music.

Having met in graduate school at USC more than a decade ago, the pair has performed in some of the most exciting festivals and venues across the country, including The Bang on a Can Summer Music Festival at MASS MoCA, the Center for New Music in San Francisco, and the Los Angeles Philharmonic’s Noon to Midnight Festival. Indeed, HOCKET has premiered over 100 chamber and solo works, as well as having collaborated with prestigious new music ensembles, among them Eighth Blackbird.

And while the COVID crisis has basically sidelined live performances, HOCKET has been fiendishly busy, notably with its commissioning project, #What2020SoundsLike. Making video recordings of 50 new works — miniatures ranging from 15 to 45 seconds in length from 50 commissioned composers — Gibson and Kotcheff recently snagged a fistful of awards from readers of this publication. Included were: “Best Streamed Performance Created During the Pandemic,” “Best Discovery,” and “Best New-Music Ensemble,” with Kotcheff racking up a solo win for “Best Instrumental Recital Performance” for his 60-minute interpretation of Frederic Rzewski’s Songs of Insurrection.

I caught up with the pair in a recent phone conversation, where they were excited to share their thoughts on their commissioning project, their attraction to new music and the politics of the moment.

First of all, why did you decide to call yourselves HOCKET and what was the genesis of #What2020SoundsLike, a four-month project begun in July, with the performances released on social media and which will then be re-recorded for an album at the end of the year?

SG: Essentially, the word “hocket” is a musical term that means when two voices come together to make one complete thought. Also, pianos can be pretty percussive and we like the percussive sound of that word.

TK: We were surprised the name wasn’t taken. [As for #What2020SoundsLike], when everything we had lined up for spring was cancelled, in early June we were itching to make music, and as composers and creators, we love to collaborate with our friends. We were also lucky to have a supporter [John Bierbusse] offer to fund the project.

SG: He’s funded the commissions and the album, which has been life-changing. We’ve been able to be creative and work with other people again.

How did you choose the composers — which include Alexander Elliott Miller who wrote the brooding but tender, BGA (Breonna, George and Ahmaud), Donald Crockett, who penned the mysterious sounding Night, and Juan Pablo Contreras, whose piece, Mariachititlán has the feel of a highly rhythmic romp? And why the miniature format?

TK: We wanted to bring us all together through us and our musicality and do something [dealing with] what it means to be alive right now. One discussion was what do we want to make and why do we want to make it? We began during the Black Lives Matter protest on top of the pandemic. The performances are meant to be watched on your phone, your device, your computer.

SG: We talked about how many people are staring at screens for so many hours and it’s hard to watch an hour-long concert that way. Also, it’s not that big of a time commitment and hopefully, it would still be meaningful. We wanted it to be broader than just Covid, because Covid can be so depressing and hard for creative artists, so if they didn’t want to respond to [the pandemic] that would be okay.

TK: Some pieces are heavy; some are very light. It’s music that they wanted to write, because that’s what 2020 sounds like to them.

You also broadened the scope of commissions by including composers from the jazz scene — saxophonist Hitomi Oba and pianist Miro Sprague, for example — as well as pop singer/songwriter/actress India Carney. Were there any works submitted that you chose not to include or record?

TK: For us, even if personally we don’t love a piece, we still believe in the music we’re playing and in those composers — for us being a vehicle for music, regardless of our personal taste. That being said, we thoroughly enjoy playing them. That part of being in new music and you don’t know what you’re getting, you’re the first person interpreting it and the first person to give it to the world. That’s important for us and that’s what we built upon.

Do you consider yourselves political?

SG: Today we recorded a piece that I think is the most immediately effective by Jen Shyu, March for Jacob Blake. She wrote a piece for four hands in memoriam for him. It’s dirge-like and feels very important and poignant. I feel honored that we got that take from her that quickly in the moment.

SG: Absolutely, I agree — and I can’t say it better than Thomas.

In addition to performing, you’re also both composers. What are your processes like?

SG: We’re actually writing a piece together now, our first. We were commissioned by Boston Court to write a song cycle for soprano [Julia Metzler] and piano duo. We’ll be performing October 16, livestreaming, and I think we’ve learned a lot about each other’s processes. Thomas works quicker than me. I can’t speak for both of us but a huge part of our process is workshopping and that’s a huge part of why we love HOCKET. We workshop, collaborate, and spitball, and when we write our own pieces, each has changed during the rehearsal process. That’s been a big part of what drew us together. We love to look at music both as composer and performer.

TK: For this specific piece, one of us writes a line — the vocal part — and sends it to the other person. The other edits. It’s a leapfrog technique and it’s been really cool because it’s a way of working we haven’t done before. One thing you learn from being a new music ensemble and a composer is that the material you write is not that precious. It’s meant to be edited, changed, adjusted, collaborated on, so the sum of the parts is bigger than the whole. Something I learned by being in this ensemble and working with a lot of composers is the collaborative quality that makes it greater than when we first started.

What do we expect art to do in this particularly seismic moment and does the artist have a societal obligation to do it?

SG: Artists need to take the time to figure out what is healthy for them to do now. For some it’s too much and I think there’s a lot of validity in that. Some are using this time to be prolific, which is right for us, but each person is very different and everybody has to have empathy externally and internally.

TK: I agree with Sarah. I personally have gone through a lot of ups and downs. First, I was feeling useless, then there was tons to do, then I was feeling useless again. There are times when I see what’s going on politically and it’s [like] a rolling coaster. I know I’m not unique in this experience because any artist on earth is going through the same thing and how there is a lot going on. But my thought would be that whatever’s right for the person at any [particular] moment is right.

Congratulations to the winners of SFCV’s readers’ poll.

Mahan Esfahani Makes It Happen on the Harpsichord