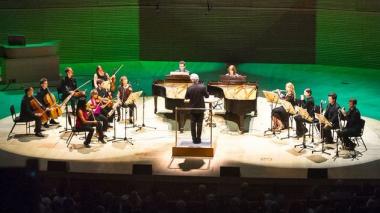 The Los Angeles Philharmonic’s musical marathon, Noon to Midnight, which took place Saturday at the Walt Disney Concert Hall is a lot like Forrest Gump’s chocolate box — You never know what you’re going to get. It’s a 12-hour kaleidoscope of musical organizations, composers, and musicians that’s less about what you like or don’t like (and  there’s more than enough of both to go around), than having the chance to discover what’s going on.

What are the newest trends? Who represents the cutting edge? Who’s mired in the past? And if they are, does that past maintain its validity? Who’s intrepidly crossing musical border zones and blurring the boundaries?

The statistics alone were impressive: 12 continuous hours of performance representing 21 overlapping concerts curated by 16 different organizations performed in multiple locations, including 14 world premieres. Was it exciting? Definitely. Was it exhausting? Absolutely.

This year there was also, quite literally, a joker in the deck. It took the form of Yuval Sharon and Annie Gosfield’s War of the Worlds. This multi-location adaptation of the Orson Welles’ radio play had two reprise performances during Noon to Midnight. (For a detailed account see my SFCV review).

The performances were a mixed blessing. Sold as a separate ticket, they created a collision that could have been called “War of the Concerts.” War of the Worlds is a big, flashy, tongue-firmly-in-cheek performance that includes a lot of humor. It is the type of piece that stimulates conversation. So, when the two full houses let out the audience was predictably boisterous. The problem was that the concerts of Noon to Midnight were going on in various parts of the hall at the same time, concerts that tended to be considerably more intimate and softer in volume. The disruption was palpable, both for the listeners and the performers. It really wasn’t until the crowd for the 2 p.m. performance of War of the Worlds departed the hall that Noon to Midnight hit its optimum rhythm for its own audience.

Room does not exist within the context of this review to give every performance the critical appraisal it deserves. Nor was it possible to hear and see all that was available. What I will say is the range of musical expression was vast — from a set of microtonal choruses with texts drawn from Euripides’s The Bakkai sung in ancient Greek, to a piece for three toy pianos that so beautifully dovetailed the music sounded like Scarlatti meets Terry Riley.

There were large ensemble pieces performed by wild Up and the Kaleidoscope Chamber Orchestra. There were several performances featuring percussion ensembles, a meditative work for solo gong, and an outdoor soundscape for six suspended microphones that sounded like another invasion from outer space.

As War of the Worlds raged on the main stage, two fine young pianists (and toy pianists), Sarah Gibson and Thomas Kotcheff, who perform as Hocket, performed a skillfully crafted recital of Andy Akiho’s Karakurenai for prepared piano; qsqsqsqsqqqqqqqq by Tristan Perich (the piece I mentioned for three toy pianos with Vicki Ray joining in); the world premiere of Nina C. Young’s Tête-à-Tête, and Kotcheff’s percussive composition, wgah ‘nahl fhtagn. The online program notes did not provide translations for those titles.

Coalesce by Marschak evoked the wistful atmosphere of Aaron Copland’s Quiet City with it melancholy trumpet solos, while Noah Meites’s Water and Power paid homage to the late Toots Thielemans. Throughout the set, Oba improvised superbly on the sax.

For the first of their two concerts, conductor Christopher Rountree and his orchestra, wild Up, performed works by six emerging composers who were asked to join the L.A. Philharmonic’s National Composer’s Intensive. The first piece, Erika Vega's Icebergs Breaking Under Cloudy Skies, evoked birdcalls in the night and was both meditative and evocative. Thoughts of From the Canyons to the Stars and The Grand Canyon Suite came to mind. I found the other pieces by Tonia Ko, Aldo Lombera, Nate May, Erika Vega, and Juan Andres far less interesting, all too similar in form, and, in the case of the last two, overly reliant on gimmicks.

Some of the finest orchestral musicianship of the entire event was turned in by the players of Jacaranda Music. The two-part program began with the world premiere of Mark Grey’s Fantasmagoriana, a three-movement piece (conducted by Donald Crockett) that blends deep, classically oriented roots with a more post-minimalist style. It’s a piece that deserves more hearings.

The most “old fashioned” performances were given by the group gnarwhallaby, two decidedly dissonant, atonal works by Élise Roy (homeostasis) and Richard Barrett (tkiva). Well played as they were by Brian Walsh, Richard Valitutto, and Matt Barbier, the music was a trip down roads already well-trodden.

When wild Up returned, they performed a piece that most obviously displayed a sense of humor, Alex Temple’s The Man Who Hated Everything. Dedicated to the rambunctious musical train wreck improvisations of Frank Zappa and the Mothers of Invention, it was a hoot. I hope Frank was there in spirit to enjoy its irreverent grandeur. Pieces by Andrew Tholl and Du Yun featured propulsive string effects with more than a hint of Shaker Loops.

The final orchestral concert was by the members of Kaleidoscope Chamber Orchestra. It featured a grandly scaled work for solo piano and orchestra, Snippets of Joy, by Krists Auznieks. While impressive, it was a musical idea that has yet to find full expression. On the other hand, And the Movement of the Tongue by Pamela Z, which combined a dialog of taped interviews about the nature of accents with an underscoring of richly textured orchestral effects, would have benefitted from some editing.

By then I was ready to call it a night.

Correction: In a previous version of this piece Erika Vega's Icebergs Breaking Under Cloudy Skies was inadvertently misidentified as David Bird's Bellona.

Walt Disney Hall Under Alien Attack in War of the Worlds