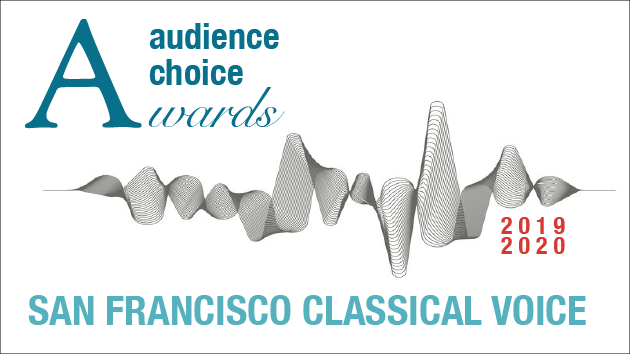 SFCV launched its first-ever Audience Choice Awards for the Los Angeles area this year, and we were impressed with your enthusiastic response! These awards were a chance to celebrate the wealth of the Los Angeles’s vital music scene by letting you honor your favorite artists, organizations, and venues from the 2019–2020 season.

There were clear winners in most categories, with a few close contests. A couple of groups even scored multiple victories.

2019–2020 was a strange season for performers and audiences alike, with cancellations and stay-at-home orders that truncated the usual performance schedule. But these circumstances also led to some creative new ways of making and sharing music. The impact of the pandemic is apparent in some categories of this poll. In fact, we added two new categories to our initial list, to recognize creative responses to this international challenge in the form of performances and composition.

Here’s how you voted:

Soprano Tiffany Ho takes the top spot. She’s been a Fox Singer with the Verdi Chorus in Santa Monica and a regular with Pacific Opera Project. So it’s no surprise that she was in the cast for your favorite opera performance of the year too. Soprano Julia Bullock came in a close second; she sang Knoxville: Summer of 1915 with the LA Phil in October and is still on the schedule for Girls of the Golden West in February 2021.

Piano duo HOCKET is the big winner this year. Not only are pianists Sarah Gibson and Thomas Kotcheff your favorite chamber ensemble of 2019–2020, but they also take home “Best New-Music Ensemble,” “Best Discovery,” and “Best Streamed Performance Created During the Pandemic.” Plus, Kotcheff wins solo for his performance of Frederic Rzewski’s Songs of Insurrection.

Thanks to the pandemic, the Los Angeles Master Chorale has had to put a halt on all of next season. But 2019–2020 was still action-packed for the group, with major performances, signature pieces, and creative educational outreach — and you remembered. And luckily, new music from the LA Master Chorale is still on the way: the chorus releases its latest CD, The Sacred Veil, later this week.

Villarreal works as a freelance dancer and choreographer in L.A. and has been associated with Heidi Duckler Dance and Backhausdance. He was the clear favorite in this category; coming in second was Oguri from Body Weather Laboratory, and third was The TL Collective member Nathan B. Makolandra.

It came down to only a couple of votes, but L.A.’s long-established early-music ensemble, Musica Angelica, won out against Delirium Musicum — though the latter group took the prize in the performance category. Musica Angelica continued its collaborations with area opera companies this past season, providing music for Long Beach Opera’s King Arthur.

Your favorite chamber ensemble and your favorite new-music ensemble. 2020 especially has been a time for HOCKET’s penchant for new music to shine through, with the duo’s commissioning project, #What2020SoundsLike, winning “Best Discovery” and “Best Streamed Performance Created During the Pandemic” too.

Of course, the LA Phil was your favorite orchestra of the 2019–2020 season. But that’s not all: the ensemble also wins for “Best Orchestral Performance,” and its home, Walt Disney Concert Hall, wins for “Best Large Venue.” Plus, when it comes to the next category …

It almost wouldn’t be right if Gustavo Dudamel didn’t win. The LA Phil’s music and artistic director is one of the uniting forces in classical music, in Los Angeles and worldwide, and he’s sticking around a while longer: the LA Phil extended his contract through 2026 earlier this year.

This was a close contest between two pianists. Yuja Wang wins here, with her February recital at Disney Hall as the prime showcase, but runner-up Thomas Kotcheff wins in the later category for his March performance of Frederic Rzewski’s Songs of Insurrection. SFCV didn’t catch Wang’s stop in Los Angeles, but we did review the program she was touring earlier this year when it came to San Francisco.

SFCV readers might have Herbie Hancock’s association with the LA Phil in mind, but as jazz instrumentalists go, he needs no introduction. He was the favorite in this category, as well as winning “Best Jazz Performance” for his Power to the People! concert with the LA Phil. Bassist Jonathan Richards was runner-up and also nominated for “Jazz Performance” for his “B-day concert” at bluewhale.

The fun and enthusiasm were behind Pacific Opera Project all the way. The company’s zany, cartoonish production of Gilbert and Sullivan’s The Mikado was your favorite opera performance of 2019–2020. Our reviewer drew a contrast between this production and POP’s sensitive take on Madama Butterfly but conceded: “It’s a lot of fun.” And you can see for yourself: the Aug. 17 performance is available to watch on YouTube. Taking second place was Los Angeles Metropolitan Opera’s Julius Caesar in Egypt, and third was LA Opera’s new La bohème.

This was a big category — 12 nominees! — that showed off everything chamber music, from world premieres to Beethoven quartets. Bridge to Everywhere, a diverse collective of musicians led by composer Derrick Spiva Jr., wins for its October concert at Boston Court Pasadena. True to its cross-cultural mission, everything from Indian classical music to jazz- and folk-inflected scores was on the program.

VOX Femina was the runaway winner here. The group’s November concert, The Notebooks of Leonardo da Vinci, was one of handful of performances of that work, by composer Jocelyn Hagen, across the country in 2019. Unique to Hagen’s piece are animations, drawn from da Vinci’s sketches, synced to music. She discussed the creative process behind this work in a TEDx Talk.

The tightest race of the awards. California Contemporary Ballet’s signature holiday production and Nutcracker alternative, The Snow Queen, barely beat out BODYTRAFFIC’s residency at The Wallis. As one of SFCV’s writers put it: Dance is in the fast lane in L.A.

Delirium Musicum visited USC’s Brain and Creativity Institute in December with Bach and Rameau in tow — not to mention Brahms, Steve Reich, Arvo Pärt, Iannis Xenakis, and Gianluca Bersanetti! The ensemble’s expansive program was nominated in several categories — “Best Chamber Performance,” “Best New Music Performance” — but takes top honors for its early-music angle. The Death of Orpheus, presented by LA Opera and performed by the company’s young artists, came in a close second.

Another big category that captured the range of music — and here, new music — that was on offer in L.A. this year. Choral Arts Initiative clinched first place for its November performance — the premiere — of What Color is the Dawn? by SoCal-based composer Jordan Kuspa, a program that also included shorter works by Edie Hill, Andrew Maxfield, and Elaine Hagenberg.

Not a lot of suspense over the winner in this category. Four LA Phil concerts were nominated, and your favorite was the orchestra’s November and December program with Gustavo Dudamel and pianist Seong-Jin Cho. Both then and now, this performance incited strong feelings. Our reviewer thought the orchestra sounded road-weary from its recent tour, but that was only one night, and the follow-up performance was a different game. In any case, repertoire, performers, and timing all made for a memorable whole.

It was dueling pianists in the “Instrumental Recital” category this year, and Thomas Kotcheff edged out Yuja Wang for the win. His March performance of Frederic Rzewski’s hour-long Songs of Insurrection, presented by Piano Spheres, was up in several other categories: “Best Chamber Performance,” “Best New Music Performance.” But it takes the gold here. Relive Kotcheff’s performance, or watch it for the first time, on YouTube.

Jazz vocalist and composer Ruth Naomi Floyd brought a West Coast premiere to Biola University in February. Her Frederick Douglass Jazz Works combines writings and words by Douglass with new music by Floyd in a project that’s only become more relevant; Floyd and her ensemble are in the process of recording the work. The close runner-up in this category was soprano Liv Redpath’s January performance with Pittance Chamber Music.

Herbie Hancock’s March 5 performance with the LA Phil was supposed to be the first concert in a month-long festival. The coronavirus shut down programming a week later, but this performance — with Hancock, his current quintet, Gustavo Dudamel, and the LA Phil — generated enough enthusiasm to be at the front of your minds come August. SFCV’s reviewer praised Hancock’s ever-contemporary outlook and remarked that the concert “found Hancock at the top of his pianistic game.”

No surprises here! Walt Disney Concert Hall, home to the LA Phil and LA Master Chorale, was your favorite large venue of the 2019–2020 season. The hall may be empty now, but it’s an essential part of the Los Angeles arts scene. Taking second place was the Hollywood Bowl, and third was Segerstrom Hall at the Segerstrom Center for the Arts.

Just across the street from your favorite large venue. Zipper Hall is just over 20 years old, and it’s the trusted concert hall for classical musicians across the city. And it’s had a new life during the pandemic: LA Chamber Orchestra musicians have recorded 2020 SummerFest concerts here, and LA Opera is set for a livestreamed production in Zipper Hall this November.

Maybe the category most impacted by the pandemic. What would have been stomping grounds for any number of summer festivals was instead a chance to highlight in-season programming initiatives and festivals from earlier this year. And the LA Phil’s Power to the People!, which SFCV previewed in March, was your enthusiastic favorite, even as it was cut short by COVID 19-cancellations. But no fear: the Power to the People! spirit will return this fall with a concert film, part of the LA Phil’s SOUND/STAGE series.

Nominations in this category ranged from venues to pieces to musicians, but one clear winner, wholly unique to 2020, emerged. HOCKET’s ongoing series of new miniature works, #What2020SoundsLike, was your discovery of the year, and also a winner in the next category.

Since concerts were first canceled in March, musicians have been making the necessary and innovative move online. And HOCKET’s #What2020SoundsLike is at the forefront of innovative. SFCV offered an overview of the commissioning and performance project back in July. And 2020 isn’t over yet; new pieces and performances are still on the way. Hear them on HOCKET’s YouTube channel.

Best Composition Created in Response to the Pandemic: Christopher Rountree and Wild Up — Immediate Tragedy

Immediate Tragedy was a collaborative feat between Martha Graham Dance Company and L.A. new-music collective Wild Up. SFCV wrote about the virtual production in June, ahead of its premiere in partnership with The Soraya. Christopher Rountree, Wild Up’s founder and artistic director, oversaw the music, inspired by fragments of a Henry Cowell composition. Rountree’s sensitive, moving score was your hands-down Audience Choice favorite. Watch the full performance here.

Check out the winners for this year’s Audience Choice Awards for the Bay Area.

Congratulations to the winners of the annual SFCV readers’ poll.

Resurrecting a lost Martha Graham dance brings out connections between 1937 and 2020.