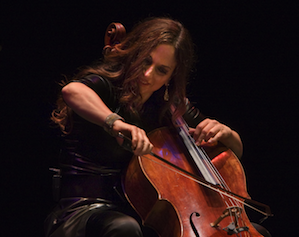 Cellist Maya Beiser Gets the Led Out

“What do you think about Pink Floyd?” When Maya Beiser was a young cellist growing up in Israel in the 1970s, one of her occasional mentors was the great Ukraine-born, San Francisco–bred violin legend Isaac Stern, who frequently visited Israel to support various educational projects. During one lesson, the young cellist asked him if he’d heard of the Dark Side of the Moon prog-rockers, Peter Gabriel’s band Genesis, and others bands she was beginning to discover outside her classical music lessons.

“Rock music is not music,” Stern replied. “That was the prevailing notion in classical music” at the time, Beiser recalls. “I decided I was going to keep listening because this is what I love — but not talk about it” among her teachers and classical types. “It took me a while to close that circle.”

With this month’s release of her new album, Uncovered, the 49-year-old “cello goddess” finally closes that circle, performing music by classic rock and blues stars like Led Zeppelin, Jimi Hendrix, Nirvana, King Crimson, AC/DC … and, yes, Pink Floyd. On Sept. 10 at Yoshi’s San Francisco, with help from Bay Area guitarist/composer Gyan Riley and drummer Matt Kilmer, she’ll play some of those songs, along with compositions by one of the successors of those first-generation art rockers, Wilco drummer and composer Glenn Kotche (who also appears on the album), and her fellow Bang on a Can All Stars cofounder, Pulitzer Prize–winning composer David Lang’s version of art/punk progenitor Lou Reed’s Velvet Underground classic, Heroin. The album also reimagines tunes from not-so-artsy rockers like Nirvana, Led Zeppelin, and AC/DC (guitar/composition genius Hendrix belongs in a category all his own) as well as rootsier musicians like Howlin’ Wolf, Muddy Waters, and Janis Joplin, the whiskey-voiced, Texas-born belter who shot to stardom after moving to San Francisco and joining Big Brother and the Holding Company. “The first time I heard Janis in my early teens, it shook me to the core,” Beiser remembers. “It was such a monumental discovery for me as a classical music geek. I fell in love with her total immersion and energy, and I’ve always looked up to Janis Joplin as the kind of artist I wanted to be.”

But if Joplin provided the role model, it was Pink Floyd and its proggy ilk who revealed to Beiser the vast possibilities of rock. Born in Britain in the late 1960s and flourishing for the next decade, progressive rock or art rock often incorporated the instrumentation, virtuosic skills and compositional techniques of classical music, resulting in works that extended beyond the conventional short pop song structures, harmonies and rhythms. “I fell in love with this music because of art rock,” Beiser says of Uncovered. “I was very much entrenched in classical music, and none of my teachers knew anything about Genesis, King Crimson, Brian Eno. It was not part of my education. I started to listen to this music and it completely transformed me. Pink Floyd were totally revolutionary, creating a symphonic like piece. King Crimson’s ‘Epitaph’ [from the Robert Fripp–led group’s debut album] is one of my favorite songs of all time, and it lends itself to cello because their thinking was symphonic — classical.”

In fact, the album might amount to a kind of latter-day apologia — aimed at her teachers and the rest of the close-minded classical establishment — for Beiser’s love of art rock. “Part of my motivation for doing this album is for people to see how this is great music, how the masters of our time are just as great as but different than Beethoven and Schubert.”

“Part of my motivation for doing this album is for people to see how this is great music, how the masters of our time are just as great as but different than Beethoven and Schubert. … All classical music performances are covers.”

Not that covering rock tunes is just a vacation from playing more challenging music, Beiser says. “Playing Schubert and Bach is playing covers, too. In that sense, all classical music performances are covers. This existed throughout music history — Mozart covered Bach, Bartók covered folk tunes: the whole history of classical music. In fact, doing this kind of album is incredibly challenging. You’re rethinking the whole thing and almost recomposing it.”

In the three-plus decades between her childhood exposure to art rock and Uncovered, Beiser moved to the U.S. in 1985 (she now lives in the Bronx), shot to fame as founding cellist of Bang on a Can All Stars, and then rode her charismatic stage presence and cello chops to a solo career that has included collaborations with (and often commissions to) composers ranging from Steve Reich to Eno to Philip Glass to Tan Dun. She’s also brought her broadmindedness to her concept of performance itself, often collaborating with visual artists and filmmakers. Her All Vows premiered at San Francisco’s Yerba Buena Center last March. But she never gave up her early affection for art rock, or her determination to play it.

“I wanted to figure out a way to play this music that really had entered the core of my soul, but for years I didn’t find the right moment or time,” she explains. “I’m so invested in generating and creating new music that it wasn’t on my agenda.” The opportunity arose in the context of a very different album, Provenance, which celebrated Christian, Jewish, and Muslim musical traditions. Zeppelin’s classic “Kashmir,” which, despite the title, actually uses Middle Eastern modes, fit that album’s theme and excited Beiser’s audience, as I’ve seen it do in other cello performances by Matt Haimovitz and Portland Cello Project. Beiser’s old colleague in Bang on a Can, clarinetist/composer Evan Ziporyn, produced that track. “After we did ‘Kashmir,’ the reactions were great and I liked it and enjoyed the whole approach,” she says. “In our collaborations we’d been doing these crazy explorations of the cello, multitracking, experimenting with creating a huge range of sounds and timbres. I love that process of overdubbing and creating. It’s an open canvas where you’re creating a painting: You start and try one thing and like it and add another color here and there.” Over the next several years, the pair would record a song or two between tours and other projects.

“It’s very much in the same way I approach classical music: internalizing it and making it something that comes from within me. Once that happens, people can relate to that, too. The music gets transformed.”

They faced a tough challenge. “With songs, it’s not just about the music, but also about the words,” Beiser says. “That’s what’s missing when it’s a pure music interpretational approach to those songs.” But the different forces also provided an advantage. “The difficulty when a singer covers a known song is that we get really attached to the original, to what we are used to hearing. So when you hear a different singer sing it, it can be hard to take,” she notes. “What’s great about doing it with cello is that we’re coming at it from a completely different place. We’re trying to find the core of the music in it. So the approach is to look at it from a compositional point of view and the harmony and so on, and try to capture that in a way that’s not necessarily imitating what it was but more about the feel, the vibe — uncovering, if you will, these other elements you wouldn’t necessarily hear on the original. Because it comes from the outside, not a rock band, people can hear it anew. I hope that people discover things they haven’t heard before.”

It happened to her on Zeppelin’s “Black Dog.” “I’ve known the song all my life but haven’t thought it about in a structural way. You discover these amazing things. These people were and are great artists.” Nevertheless, on that song, she decided an instrumental-only approach wouldn’t work, yet “no way I would try to imitate Robert Plant!” she insists, as if trying to re-create the singer’s signature vocal style were even possible, not just unwise. “How do I interpret it in a way meaningful to me? So we did a completely different approach, a feminine approach, and it became about this woman who looks at herself in the mirror, a story I created in my own mind about the song and what it means to me. Then it became this completely different thing.

“It’s very much in the same way I approach classical music: internalizing it and making it something that comes from within me. Once that happens, people can relate to that, too. The music gets transformed, in a way.”

In dealing with the challenge of turning words into music, guitar rock into cello, Maya Beiser had a not-so-secret weapon.”People always say the cello, in many ways, can be closest to the human voice,” she says. “It’s true; there’s something in the timbre and incredible range of the cello that lends it to taking on songs, because the range is so phenomenal. I can play bass notes with the low part of the cello and totally sound like a bass [guitar], and all you have to do is put a great analog fuzz-box on cello and it sounds like a beautiful, rich, electric guitar, maybe even better. You can do whole electric guitar solos, not too high but high enough, and when you put distortion on it, it sounds really great,” as on tracks like Hendrix’s “Little Wing,” Zeppelin’s “Black Dog,” and others, where she plays in the cello’s highest range. “Each one of the 10 albums I’ve done covers so many traditions. It’s the ultimate chameleon instrument.” When she played the new album to some string-playing musician friends, they said, “We didn’t know there were guitars on this album!” And there aren’t.

“These days there’s a lot more fluidity between all the different genres, which is a wonderful thing. I’m really optimistic about the music world. We live in an amazing time in terms of what can be done.”

Similarly, Beiser believes that it’s increasingly hard to find a distinction between pop and contemporary classical music today, unlike the times when many classical stars like Isaac Stern dismissed rock. “I think that we’re much closer than we think,” Beiser says. “These days you see a lot of people, like [Radiohead guitarist] Jonny Greenwood, Bryce Dessner — so many musicians in my circles go between both worlds. I think we live in an environment now where these things are accepted and allowed much more. Even 20 years ago, just the idea of being a world-class soloist and doing those things was totally unacceptable. There was this artificial boundary between what was considered serious music and what you heard on the radio. All these borders and boundaries are arbitrary and unhelpful. These days there’s a lot more fluidity between all the different genres, which is a wonderful thing. I’m really optimistic about the music world. We live in an amazing time in terms of what can be done.”