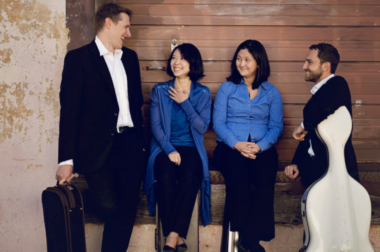 Smoke from forest fires isn’t the only thing that’s been drifting back and forth between California and Oregon lately. Composers and performers in the neighboring states have been sharing musical ideas and performances, thanks in part to Cascadia Composers.

Founded in 2008 by composer David Bernstein, who’d moved to Oregon after retiring from a long career in academia, Cascadia immediately faced its first crisis: Should it be open to anyone, or limit membership to distinguished regional “name” composers? Bernstein, supported by one of the state’s most esteemed composers, Portland State University professor Tomas Svoboda, pushed for a no-gatekeepers policy, which cost the nascent group some of the state’s best known academic composers — but also opened the floodgates to richer, broader streams of sounds from composers of diverse ages, occupations, styles, and backgrounds, ranging from jazz-tinged sounds to electronica to classically influenced metal.

“From the beginning we have been inclusive rather than exclusive, and we have been enablers rather than gatekeepers,” says original member and UC-Berkeley graduate Jeff Winslow. “That is because that’s what David wanted, and he gathered generally like-minded people around him.”

Thanks to extensive volunteer efforts, the number of concerts gradually grew from a few per year, at first mostly at area churches, to last season’s record 10. From its original Portland base, the group attracted composers from throughout Oregon as well as Idaho, Illinois, and beyond. California based Cascadians include Oakland’s Antonio Celaya, Susan Alexjander, John Bilotta (now president of NACUSA’s San Francisco chapter), Bill Toutant, David Drexler, and Andy Robinson.

“I think a lot of the music would not have been written” without the organization, Bernstein says. “Like a lot of composers, I can’t write music in the abstract. I need a stimulus, and the stimulus is performance.”

Cascadia Composers also offers workshops, bringing in Oregon Symphony musicians and others to show composers how best to write for various instruments. The group holds monthly presentations for composers to share music and ideas. A concert or post-presentation discussion often segues into a group trip to a cafe or club, a valuable social opportunity in a profession that’s inherently isolating.

“We tend to be introverts,” spending hours alone with a manuscript or computer, current Cascadia Composers president Ted Clifford says. “The most valuable part of Cascadia is the great community of people in it who are so helpful to each other and supportive of each other.”

Cascadia’s most fruitful partnership has been the Delgani String Quartet, who are featured in several concerts this month. Based in Eugene, where founding violinists Wyatt True and Jannie Wei were studying music at the University of Oregon’s doctoral program, it’s one of the state’s few chamber ensembles whose members perform full seasons together, along with regular gigs in the Eugene Symphony and other local orchestras. That long-cultivated cohesion — along with their considerable chops — makes the Delgani one of the state’s preeminent regularly performing classical-music institutions. They have made a pair of solid recordings featuring music by Oregon composers, including Portland-born Bay Area legend Lou Harrison.

This month’s stream mostly features brief, newly recorded (at Eugene’s First Church of Christ, Scientist) solos and duos, with brief notes by each composer. It opens and closes with cello solo works by Liz Nedela and Stacey Philipps that show off Eric Alterman’s sturdy low-range tone. Philipps’s The blackbird whirled and Greg A. Steinke’s upbeat Bent’s Old Fort musically respond to visual images. Lisa Marsh’s Serenade is, like Philipps’s piece, an arrangement of a vocal original. It makes a sweet showcase for the wife and husband violin duo of Wei and True. They also sparkled in Brian Field’s jazzy two-violin duo Two, Four by Four, which will delight fans of the Turtle Island String Quartet. Christopher M. Wicks’s solo viola Ruminations expresses the anxiety the composer felt as he helped his elderly father endure a medical crisis last spring.

They’re all enjoyable, but merely appetizers for the main reason to watch this stream: an excerpt from Delgani’s taut 2017 traversal of Svoboda’s blistering Sixth String Quartet, an homage to the venerable Portland composer’s idol, Dmitri Shostakovich, that left the audience cheering. By turns bleak, ominous, and tense, it fully captures the Russian composer’s spirit without resorting to mere imitation. An ideal match of magnificent music, appropriate acoustic, and committed players, Delgani’s original 2017 performance was one of the most powerful chamber music experiences I’ve enjoyed in Portland. I’m glad listeners elsewhere will get it to hear at least part of it this month. Svoboda and Delgani deserve wider attention, even if it takes a pandemic to make it happen. Today, Cascadia Composers’ reach is extending into California, and tomorrow — now that its concerts are streaming — the world.