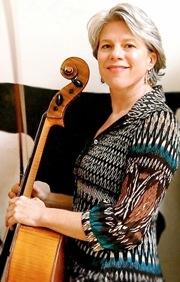 Acclaimed cellist Tanya Tomkins is equally at home with early music, the classics, and contemporary compositions, but on the weekend of Nov. 19, it’s the early music and instrument that will be in the limelight. The San Francisco Early Music Society will be presenting Tomkins performing three of the Bach Solo Cello Suites on Baroque cello; she’ll play the other three in March. It’s not only music that Tomkins loves, it’s also, in her words, something “I’m really thrilled and honored to do. It’s really fun, and great to share.” The concerts will take place on Nov. 19 in Palo Alto, Nov. 20 in Berkeley, and Nov. 21 in San Francisco. If you’re unable to attend, though, you needn’t miss out on hearing her play that weekend: the PBO recording of the Beethoven Triple Concerto with her as a soloist will air November 19th on KDFC. While you're at it, mark your calendars for March 18, 19, and 20, 2011, and when Tomkins will be playing the other three suites.

Your upcoming concert features three of the Bach Solo Cello Suites. What do you find intriguing about these pieces?

The Bach Suites represent some of the most complex writing a composer can do for a single-voice instrument. It’s a challenge. It’s harmonic, melodic, contrapuntal — the variety is amazing. I’ve recorded these pieces and I’ve been performing them and practicing them, and I still find things I didn’t see before. You never reach your limit. The more I play, the more I wonder, “Who was this ridiculously ingenious and inventive person?” It’s fun.

Right now I’m in a Bach Suites phase of my life. It’s comforting to my ear and soul. It’s complex, but nothing is horribly jarring.

What would you like audiences to know about these pieces?

We don’t know if these pieces were written as concert pieces or even why they were written. Are they études? I used to get kind of offended about that, as it is great music, but the more I play them, the more I learn from them.

They’re very intimate, not really suited for a big audience, so you have to adjust what it means to hear them. Imagine you’re just in a beautiful room, listening quietly. They’re very bare, different from something like opera with the bells and whistles. It’s an interesting performance atmosphere.

What is it about early music you find compelling?

It’s the newness of it. Of course, it’s not completely new, but within my lifetime we’ve begun approaching early music a new way. It’s not Romanticism; it’s brought all this music alive. If you grew up studying music in the modern style, [with] things like vibrato on every note, and then read about how people played back when the music was written, it’s very liberating. And the music works better.

I really enjoy hearing symphonies played on the instruments they were written for.

You don’t only play early music, though. What do you like about modern repertoire?

My true love is chamber music. You can’t rule out anything. I love Brahms, Dvořák. ... I wouldn’t give that up.

For contemporary music, it’s nice to try to get into the minds of the composers, which you can do when they’re still alive by asking them questions. It also helps me understand Bach; after all, he was a live person. And I love the sound of the modern cello.

My teacher Anner Bijlsma was the first to record the Bach Suites on the Baroque cello. He was a great role model. He encouraged me to not choose between the Baroque and the modern cello. He said we can do every type of music, every way we want.

You’re also part of the Zivian-Tomkins Duo. What can you tell me about that collaboration and others you’ve done?

We live together. We play modern compositions; Eric is very much a contemporary composer. But we’ve done performances and recordings with him on the fortepiano. We have a collection of fortepianos.

You lived in Holland for 14 years but are now in the Bay Area. What brought you here?

I had traveled a lot in Europe and wanted to live a more-normal life. But it’s not normal [here]! It’s similar to Amsterdam. A lot of early music, a lot of contemporary music, and a lively and very supporting community.

When did you start playing the cello?

I started the cello at age 8. I started playing the piano at age 5.

My sister played the violin and I really wanted to play it, as well. My mother played the piano and sang, so she thought it would be nice for me to play cello so we could play together. It took about 30 years, but I’ve forgiven my mother and I love the cello.

Do you think your home, as you were growing up, was normal?

No, not normal. I came from a high-powered family. My father was a well-known scientist and my mother was an artist. There was an emphasis on achievement.

My father died when I was 13, and my mother went on her own path. Playing the cello brought me into contact with teachers who nurtured me and provided a sense of community. My teacher Millie Rosner was great. I remember her having her students sitting on her living room floor playing for each other.

In my teaching, I’m drawn to kids whose lives are hard. It gives me pleasure to provide an area of safety for them with music.

If not the cello, what instrument would you like to play?

I play the violin, though not well. I play quartets on the wrong instruments with other PBO musicians for fun, and I always play the violin with great abandon, and very badly!

I’m drawn to the string family. I like the physical feeling of the bow and hair on the string. It seems magical and mystical.

If you weren’t a musician, what do you think you would be doing?

I’d like to write. I’ve tried writing, and taken classes. The act of writing made me feel good. Editing and rewriting were not magical, and I realized I’d rather be practicing.

What do you do in your spare time? I enjoy teaching. I’ve taken up bridge, and I’m studying Russian and French. Of course, I’m fluent in Dutch. I have a fantastic Russian teacher I go to once a week. She’s taught me a lot about teaching and makes me feel that someday I will speak and read Russian.

I like museums and movies. I’m very urban. Eric is happy in the mountains, so we go there, as well. But I need to get back to my cappuccinos.

What are you listening to now?

I don’t listen to music for fun; I hear so much music that silence is more fun. But thanks to the benefit of YouTube, I’m watching Leonard Bernstein and the Vienna Symphony perform Schumann. I’m editing my own Bach Suites.