At just 24, pianist Isata Kanneh-Mason has already led a pretty incredible life. The oldest in a family of seven siblings from Nottingham, England, all instrumentalists seriously devoted to classical music, she began playing the piano at age 6, was a finalist in the 2014 BBC Young Musician competition, and held an Elton John scholarship while studying at the Royal Academy of Music in London. Before completing her undergraduate degree there, she met Sir Elton himself, who invited her to perform with him at a concert in Los Angeles in 2013. She was only 17 at the time. 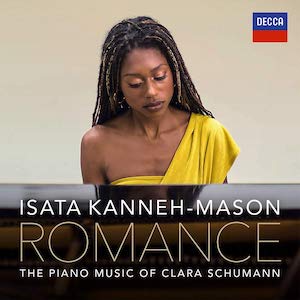 Kanneh-Mason has performed extensively worldwide and tours frequently with her brother Sheku, the 21-year-old cellist who garnered international attention when he performed at the Royal Wedding of Prince Harry and Meghan Markle. Her 2019 debut album, Romance: The Piano Music of Clara Schumann, celebrating the anniversary of the composer’s 200th birthday, hit the UK classical charts at No 1.

The Kanneh-Mason family is a sensation in the U.K. Called “the most famous family in classical music” by Simon Cowell when they performed on Britain’s Got Talent in 2015, they were recently the subject of a documentary on BBC One’s Imagine, titled This House is Full of Music, filmed by remote cameras while the family was in lockdown together at their home in Nottingham, and aired on July 12, 2020. Their father, Stuart Mason, is a business manager originally from Antigua and their mother, Dr. Kadiatu Kanneh, is a former university lecturer originally from Sierra Leone.

Since they were not able to tour the U.S. as planned this year, on Sunday, Dec. 20, Isata and Sheku performed the final concert of their virtual residency at the Philharmonic Society of Orange County.

I chatted with Isata (pronounced Ice-ih-ta, which means source of life in the Mende language of Sierra Leone) from her home in London about her charmed life, her wonderful relationship with her family, and how things are going for her during the Covid lockdown.

What is it about classical music that attracted you? Was that the only way you saw a career path in music?

I just always loved classical music — there’s so much variety. There’s over 400 years of different styles and contrasts and the music I find has so much complexity that I never get bored and there’s always more to discover. I love listening to all kinds of music, but classical music was the only one that I was interested in performing professionally.

Your family was so devastated by the death of George Floyd that everyone participated in a tribute performance of Leonard Cohen’s “Hallelujah” on YouTube that was watched by millions. Did it ever feel like race was a barrier in your career?

It’s quite a difficult question to answer because I grew up in a very lucky position. The classical music world is very inclusive and I always had wonderful friends and family. It can be very expensive to pursue classical music, and unfortunately for many people of color, they just don’t have the income. There’s definitely a gap — a lack of opportunity. That’s something that ultimately needs to change.

Have you ever felt that being a woman was a barrier for you?

Have you ever thought about experimenting with other genres professionally?

No, I don’t think so. There are so many years of classical music to discover, I think that would take me more than a lifetime already. I played a couple of Bob Marley pieces with my siblings for fun, but I would never seriously get into another genre.

In normal times, you are touring and performing a lot. What do you like about performing?

When I go to a concert, if it’s a really good concert, it takes me to a different place and really inspires me, and then I come back feeling like I have been taken out of my everyday routine. I think that’s why people go to a concert — because they want to be energized and excited, and to me that’s a really exciting thing to be giving to people.

Your album Romance: The Piano Music of Clara Schumann, came out last year to much acclaim. Why did you choose to do an entire record of her music?

I didn’t know her music very well so I started listening to more of it and really liked it. There was so much more out there than I had originally thought, so I wanted to fill a whole album with her music. It’s not played so much and I thought it would be great to make it more mainstream.

The family recently released a recording of Camille Saint-Saëns’s Carnival of the Animals. What was the experience like making the first recording with the whole family and why did they choose this piece?

It was lovely. For the younger two, it was their first time making a recording. We grew up with Peter and the Wolf and we thought Carnival of the Animals would be a great way to reach children. It was planned before, but then we were all in Nottingham for the lockdown, so we rehearsed for a couple of months and recorded it in August when restrictions had eased. 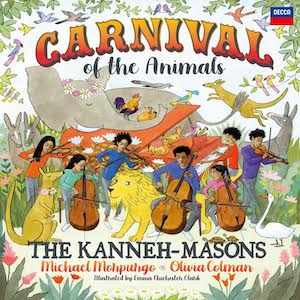 The bad things are obviously all of the cancelled concerts and seeing the struggles in the industry and how it is going to be after this, particularly for smaller festivals and orchestras. The good side is having more time to get deeper into music and explore pieces and remind yourself why you like performing, and why you enjoy being a musician now that you have the time and space to reflect on that.

What is your vision right now for your life going forward?

I always knew that I wanted to be a performer and I think I would just like to continue performing for a while longer. There will be a period of time where I want to have a family and maybe do some composing or something that requires less traveling, but I think that’s not for a few years, especially since I’ve missed a whole year of traveling.

What do you value most in your life and has that changed since the pandemic?

Why do you think music is so important to you, and to the world?

The reason music is so important is that it really expresses humanity, and life, and creativity. I think that for our emotional wellbeing, we all have a need to be creative, and for me, music is the ultimate creativity — that’s why I love it so much.

The cello-piano pair are equal partners in a concert slate that showcases the strengths of each artist.

The focused young artist has upcoming gigs in L.A. and the Bay Area.