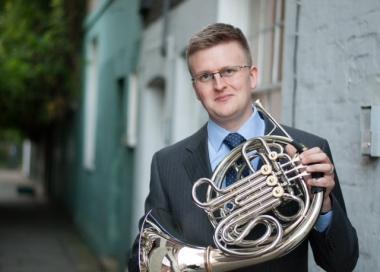 In the news biz, it’s called “burying the lede” when the most interesting or important aspect of a story is in the middle instead of at the top.

That thought occurred to me when reading the SF Symphony announcement last week:

But then read this:

“In addition to playing the horn, Almond is an experienced hospital physician and has a Ph.D. in immunology and virology from Imperial College, London. He is currently researching COVID-19 as a post-doctoral research scholar at UCSF.”

So here’s my attempt to “right” the story: “Physician in Immunology and Virology, Researching COVID-19, Also Plays the Horn.”

That’s not exactly right either, so I asked Almond how this unique situation came about — unique not in combining music and medicine, but excelling in the combination. (Albert Schweitzer and Jonathan Miller did as well, and there were Berlioz, Borodin, and Kreisler too, among others.)

First, what exactly is he researching?

“I’m working at Oren Rosenberg’s laboratory at UCSF in collaboration with the Quantitative Biosciences Institute [QBI] Covid research group [QCRG]. I’m infecting various human cell types with SARS-CoV-2 in the BSL3 lab and setting up a cryoelectron microscopy [CryoEM] model to study how various genes and therapies affect the passage of the virus through various cellular structures.” Not your typical hornist’s activity.

Almond grew up in Bolton, Greater Manchester, in North West England, a 19th-century boomtown, which at its zenith in the 1920s, had 216 cotton mills; historically, it’s been part of Lancashire. His mother was a school teacher and his dad an officer in the fire service. “Bolton had a really good, local council-run music service, and I started playing the tenor horn (a brass-band instrument) when I was eight.

“I started the French horn when I was 11 and was taught by Chris Wormald, a local high-school music teacher and he was a real positive influence in my life and the discipline he instilled in my playing spilled over to my school work.”

After playing in local youth orchestras and bands for a couple of years, Almond gained a place in the National Youth Orchestra of Great Britain and then moved on to the European Union Youth Orchestra for a year. “Around the same time I started doing music competitions such as the BBC Young Musician of the Year and Shell/LSO [London Symphony Orchestra] scholarship.”

During all this time, he recalls, his parents regarded music as a hobby rather than a profession, and they encouraged Almond’s interest in medicine. At Cambridge University, he managed to do both, “every night I was rehearsing with a different ensemble and getting through a huge amount of repertoire.”

In his second year of medicine, Almond got his first call to work as a substitute with the LSO. From then on, he mixed his studies with working and touring with orchestras including the LSO, Philharmonia, City of Birmingham symphony Orchestra, and Royal Philharmonic. After completing three years at Cambridge, he took a year off medicine to freelance in London and to trial with the Philharmonia on third horn.

During this time, Almond was also active as a soloist and chamber musician and soloed in the Franz Strauss concerto with the London Symphony Orchestra, Mozart’s Horn Concerto No. 4 with the Hallé Orchestra, and Richard Strauss’s Concerto No. 2 with the Royal Liverpool Philharmonic Orchestra.

“I returned to medicine, this time at Oxford University for my clinical studies, and in my second year — literally after delivering a baby as a medical student — got a phone call from the principal horn of the Philharmonia offering me the third horn job under [Christoph von] Dohnányi. I accepted and left medical school again.” Almond played in Carnegie Hall as guest principal horn of the Philharmonia with Dohnányi in Bruckner’s Fourth Symphony.

“I spent a wonderful year with the Philharmonia but decided I should really finish my medical studies, so I returned to Oxford.”

During his studies, Almond continued to work on a freelance basis with the London orchestras and in recording studios. He also participated in the recording of soundtracks for Avengers: Age of Ultron, Ant-Man, Chicago, The Da Vinci Code, and Harry Potter and the Half-Blood Prince, among others.

“Whilst working as a junior doctor in the Central London hospitals I used to ‘peak and trough’ in terms of balancing the two careers,” Almond recalls. “If I had a postgraduate medical exam coming up, the horn would go in the cupboard for a couple of weeks, whereas if I had a concerto coming up, the medical books would go away for a while. The horn definitely took a back seat during my early years as a junior doctor but I kept playing with local amateur ensembles to keep my playing up.”

Even with the divided careers, Almond managed to specialize in respiratory medicine, and he won a Wellcome Trust clinical research fellowship, which then funded his Ph.D. at Imperial College, London. “I was always interested in virology and designed a project to assess the effects of obesity on the innate immune response to pandemic influenza. My Ph.D. gave me relatively more ‘downtime’ compared to being a junior doctor and I started to play more frequently with the London orchestras again.”

Of course, known for his “other career,” Almond was often presented in rehearsals and on tours with “many musicians’ ailments/body parts.” He recalls the most memorable event during a performance of Mahler’s Ninth Symphony on tour with a London orchestra — “a normal performance until the last movement, when a lot of groaning started occurring behind me — the basses were sat behind the horns. A couple of minutes later, the musician vomited down their double bass and collapsed.

“The maestro stopped the performance and everybody looked at me to sort it out: ‘You’re a doctor!’ It’s a very strange experience standing up in front of 3,000 people to go sort out a colleague. He was fine — food poisoning.” (It’s a doctor, not a horn player who would call food poisoning “fine.”)

Then, five years ago, Almond’s wife suggested moving to California for her work with a tech company in the U.K. with the head office in the Bay Area. “I was very keen to come — I was in the final year of my specialist training in the U.K. — so I literally googled ‘horn jobs San Francisco’ and the co-principal horn job at SF Opera came up.

“I flew over and experienced the American blind audition system for the first time. I got through to the final round and was happy how I’d played, however the personnel manager told the four finalists that they only wanted to hear one player in the superfinals, so I assumed that person had won the job. I found out the following day that nobody had been hired and, after seeking feedback, [I] was encouraged to reapply on an American instrument, a Conn 8D, rather than the European-style instrument I was playing.

“I returned to the U.K. the following day and bought a used Conn 8D and practiced for the next year (whilst working at the Royal Brompton Hospital). I practiced every day, after night shifts, during night shifts (in the doctors’ mess after my medical rounds, with a pager constantly at my side) and won the job in the Spring 2016. I was working in hospital on 8 August and started at the Opera on 22 August [Andrea Chenier, with Luisotti].”

During his four years with SF Opera, Almond’s fondest memories include Billy Budd, Elektra, and The Makropoulos Case: “The Opera Orchestra is fabulous, and I was blessed to have such talented and supportive colleagues.”

From SF Opera Executive Director Matthew Shilvock’s blog of the 2018 Ring: “Kevin Rivard and Mark Almond lead an extraordinary group of horn players whose artistry, along with the whole orchestra, will take us on a thrilling journey through all four operas. As you listen to the Rhine River beginning to surge at the opening of Rheingold, give a thought to the horn players who are just embarking on an Olympic marathon of exquisite nobility.”

Almond auditioned for SF Symphony this February, just before the lockdown in San Francisco. He spent time homeschooling his son and working out how to do multitrack videos. Later, he also approached UCSF to put his medical and research experience to use, and started working on COVID-19 research in the Rosenberg Lab as a post-doc research scholar in July.

“I’m really looking forward to working with the Symphony when the pandemic allows,” Almond says, “but in the meantime it’s great to be working in a fabulous lab doing cutting-edge Covid research.”

The brass section gets a workout in Wagner's magnum opus, striking both joy and terror in the hearts of the players.

The septet featured music by Maddalena Casulana and Clara Schumann in a concert that was a little too firmly rooted in the past.

Tim Higgins and the SF Symphony Brass Do It Their Way

The SFS principal trombonist talks getting great tone, mixing a perfect cocktail, and the Holiday Brass show at Davies on Dec. 15.