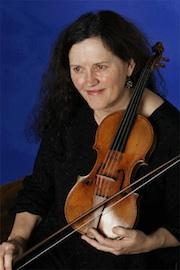 Both the Philharmonia Baroque Orchestra and violinist Elizabeth Blumenstock have two reasons for celebration this month. First, she’s celebrating her 30 years with the PBO, only one of the many groups she plays with in the U.S. and abroad. Second, the PBO is about to release its third recording on its own label, featuring seven Vivaldi violin concertos, including The Four Seasons, with Blumenstock as the featured soloist. It’s safe to say that this has been a mutually rewarding partnership over these three decades.

Congratulations on 30 years with PBO. Does it feel like that long?

Considering just playing with the PBO, no. Considering my personal life, yeah, it seems that long. I guess time flies when you’re playing music.

How was the [PBO’s recent] tour?

The tour was fabulous! There were three exalted venues [Ravinia, Tanglewood, and Lincoln Center]. There was also a charming series in Connecticut [the Norfolk Chamber Music Series]; it was beautiful, in a rustic, barnlike setting. It was quite humid and raining, and the windows were open, so our gut strings were doing that thing that they do.

You play with a lot of different groups. How do you keep it all straight?

I rely heavily on my calendar. For many years, when I was first starting out, I prided myself on keeping it in my head, but the head doesn’t keep up on its own anymore.

You obviously must enjoy the different things you do.

You also do a lot of teaching, don’t you?

Not a whole lot just now. I used to teach at USC, but now I just teach a few hours at the [San Francisco] Conservatory as part of the adjunct faculty, a few private students, and summer workshops.

You’ve made over 95 recordings.

Probably around half of those are orchestral and opera CDs, and the other half chamber music. In this day and age, and if you’re counting orchestral CDs, 95 is not a huge number.

Obviously, recording is different from live performance, but what are the main differences you notice?

The absence of an audience is a big thing. When you’re recording, your audience is someone [the producer or the engineer] who is listening extremely critically, though supportively. A live audience is probably listening less critically, but supportively; they’re there to enjoy themselves. In both situations, though, my focus is on having a good time, and doing my best to show off the music. So what I do in each case is the same, but the subjective experience is different.

The latest CD that PBO recorded was done at Skywalker Ranch. Had you been there before?

Yes, PBO has recorded quite a few CDs there.

Are the facilities different than at other recording studios? Is there a sci-fi aspect?

The sci-fi aspect is that sci-fi is a big business, so the recording studio is state of the art. Of course, the studio is not used only for sci-fi projects. It’s just a wonderful place to work.

Why did you start playing the violin?

My mother had a crush on a local violin teacher. She had already started me on piano lessons, but after she met the violin teacher, suddenly I was taking violin lessons.

You must have enjoyed it.

I don’t remember. I was reasonably good at it, and my mother just had an expectation that I would continue, so I did. It was just the two of us; I didn’t have a dad or siblings to complain to, if I had wanted to, which I don’t think I really did.

What drew you to Baroque violin?

Listening to the Harnoncourt and Leonhardt recordings of Bach Cantatas in the ’70s. I had grown up listening to Baroque music at home; it was the background music to my childhood. But then I heard these cantata recordings. I was blown away by the expressiveness and instrumental timbres. The music came alive. I was a music major at Cal [UC Berkeley], playing the modern viola, and when I went back to the violin it was to the Baroque violin.

I like to process nonmusical sounds. It’s a form of downtime.

Do you play other instruments?

Well, I’ve kept up my keyboard skills reasonably well. For 21 years, I was the organist and choirmaster at Holy Trinity Episcopal Church in Richmond.

If you could take up another instrument, what would you play?

When I retire and move to New Mexico, I’m going to learn viola da gamba from Mary Springfels. If I ever had a chance to play a wind instrument, it would be early trombone or cornetto. The cornetto may be too hard, but what an incredible sound!

If you weren’t a musician, what would you be doing?

I really enjoyed my two years of biology in high school in Vermont. I had an excellent teacher. I’d like to think I might have been a biologist, an evolutionary biologist.

What do you do in your free time?

When I have a few days of nothing to do, I stop. It takes me two or three days before I realize I can do something, like work on a quilt project. It’s an interesting experience. It’s almost a relief to go back to the schedule, but you don’t want to lose touch with motivating yourself. I realize it’s a luxury to have that issue to deal with.

Quilting is a hobby. I make beaded earrings. I play online Boggle, way too much of it. I play Scrabble, usually with [fellow PBO violinist] Lisa Weiss. I’ve been doing a lot of cooking for my mom.

I don’t often sit at home and listen to music. I typically listen to music in two situations. At dinnertime, I pull a CD off the shelf at random and my mom and I listen to it while we eat. I’m looking at the stack of recently played “dinner” CDs; there are old Philharmonia CDs, Stravinsky, Haydn Quartets. …

I also listen to music when I’m driving. I’ll listen to anything I find that appeals, a pretty broad spectrum: rock, jazz.

Generally, though, I don’t do a huge amount of listening to music. I like to process nonmusical sounds. It’s a form of downtime, and if I’m working on a piece, my unconscious gets a chance to work on it during relative silence, and I’ll find that my understanding of the piece is developing. I enjoy that, and it might happen less if I were constantly listening to other music.

The Philharmonia Baroque Orchestra’s latest CD, Vivaldi: The Four Seasons, will be released on Sept. 13. Upcoming performances include Purcell’s Dido and Aeneas at Zellerbach Hall in Berkeley, with Mark Morris conducting PBO and his own dance group, Sept. 16–18, and “Mozart and Haydn: A Tale of Two Cities,” featuring R. J. Kelley, Sept. 22–25, in Atherton, San Francisco, and Berkeley.