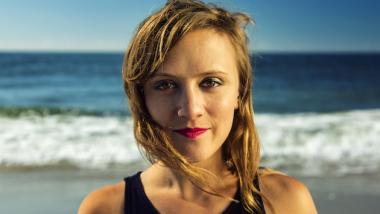 In the realm of sports there are lots of terms that celebrate multiple achievements: the Triple Crown, the Three-Peat, the Hat Trick. Classical music, of course, is far too elevated an art form to indulge in such gauche accolades.

That’s too bad. There should be some catchy phrase that would celebrate the achievement of composer and sound installation designer Ellen Reid. Over the course of one year, Reid will have had premieres of her work with the Los Angeles Chamber Orchestra (Petrichor), the Los Angeles Master Chorale (Dreams of the New World), and the Los Angeles Philharmonic (Oscillations: One Hundred Years and Forever).

On Nov. 29, Reid will complete the cycle of major music presenters when Los Angeles Opera presents the world premiere of her opera, prism (p r i s m) in collaboration with Beth Morrison Projects. Presented as part of L.A. Opera’s “Off Grand” chamber opera series, prism, is being staged at REDCAT (the Roy and Edna Disney Cal Arts Theater) with additional performances scheduled for Nov. 30, Dec. 1–2.

The result of a four-year-long collaboration with librettist Roxie Perkins, prism tells the story of a sickly girl, Bibi, and her doting, overly protective mother, Lumee. Together they live a claustrophobic life locked away from the world until one night a chorus of mysterious voices enthralls Bibi, fracturing her devotion to her mother and causing her to question their isolated existence.

When I phoned Ellen Reid to talk about the upcoming premiere, the first question I had was about her area code.

Knoxville, Tennessee. I’m from Tennessee. I was born in Oak Ridge. [Production site for the Manhattan Project that developed the atomic bomb.]

Where are you now?

Having read the libretto and looked at your score, prism looks like a fascinating opera. It’s theme dealing with the lasting effects of sexual trauma seems so relevant with the emergence of the #MeToo movement, and especially after the testimony of Christine Blasey Ford.

That’s true. But we started work on prism four years ago. It’s an original story by Roxie. Then really fascinating things started happening. We would be writing and come up with ideas we thought would make the story more exciting. Then we would decide to cut them because they were too intense. Then almost exactly the same thing we’d written would show up on the news! The idea of life mirroring art really happened with this piece. Those events didn’t change our approach, but we do think because of them, a lot more people will relate to the story, women and men.

Was sexual trauma and PTSD part of the original concept?

In a way it was. But we discovered we could develop an even deeper, richer theme by exploring the residual effect that events like that have on people. The two halves of the opera are very different. The first half is very impressionistic. But that shatters as the piece goes forward.

What do you mean by shatters?

The music becomes more polystylistic and it incorporates different touch points of style and sound. It incorporates electronics and uses the instruments in different ways. We ask the singers (soprano, mezzo-soprano and 12-voice chorus) to do different things with their voices as well. There are a lot of sonic references and layering that moves from magical to more real.

I have never seen a libretto that made such specific indications about the relationship between a moment in the story and its corresponding color. Is that something you relate to in your compositional process?

Color plays a very important part in the opera. When I am writing I use color as a way to describe a sonic landscape. A lot of the pieces I have done have different colors for me. Dreams of the New World [premiered by the L.A. Master Chorale] had a different color in mind for each section. I don’t have syesthesia (specific notes that stimulate specific colors), but I have it when I’m writing. For example, certain intervals have certain colors associated with them. A yellow section would have different intervals and qualities than a red section. Red is more like the open sonorities of fifths. So, it was wonderful to find a libretto that uses color as a defining aspect in terms of tones and qualities within those tones.

You use some unusual instruments in your score. What is a waterphone and a flexatone?

The waterphone is an amazing instrument. It sounds like the sounds you hear in horror movies. It has a spiral around the outside made of small metal tubes. Then you put water in the middle of it and move it around. It goes boom, boom, boom. A flexatone is usually used in pop music. It’s another instrument you bend to create different tones. A lot of the tones in the opera tumble and bend.

You also have a number of interesting notations in your score for the musicians and the singers, indications like “suspenseful,” “wonder and mystery.” How does that help?

I do that because I think it helps the players into my sound world. If you write a super complex rhythm without any help in the description, it can be stressful for the players. But if you describe why it so complex it helps to get everyone on the same emotional page. And the opera is a dramatic work. Those words are for the musicians and the singers and the director. They’re really so everybody can understand how to interpret the pitches.

Do you know of many other composers that use that technique?

I’ve seen other scores where composers have done really interesting things with added text, and not just for operas. One score had the words of a poem written above the score, even though the poem itself was not set to the music. It’s a way of indicating the emotional beats.

Do you particularly like working in a collaborative environment?

Yes, I do. Composing can be really solitary. I appreciate the community that forms around doing a piece like
prism. I think there is an advantage to working with people that are equally good at what they do and having their points of view to work with, not just your own.

Are you comfortable about being asked to revise your work based on that type of feedback?

I think it’s necessary if you really want to explore what a piece is really about. But there is also a point when you have to just decide to go ahead with what you’ve done.

Could you talk about the Luna Composition Lab. I know it’s an organization you’re very committed to, that you founded with Missy Mazzoli. The website says it’s open to “Self-identified female, nonbinary, and gender nonconforming young composers from 8th grade through college first years.”

The Luna Composition Lab is something I feel very lucky to be a part of. It’s a mentorship program for young female composers. [It’s associated with the Face the Music orchestra program at the Kaufman Music Center in New York City.] We have five fellows and one fellow is paired with a mentor and together they work toward having a concert in New York at the end of the school year. Having the chance to hear their work performed is really inspiring. We also [help] them get recordings of their work so when they apply to colleges they have high-quality recordings. We draw from all over the country.

If the Luna Composition Lab grew out of a need you perceived, how have things changed for women composers since you began your career?

I don’t think it’s as much about then and now as that question makes it seem. The fact is that women composers are still under-represented at every level and often tokenized. Today people are trying to do better, and that’s what different. I’m not sure to what extent the reality has changed, but the conversation has changed.

A poorly-coordinated performance of Terry Riley’s In C caps off the evening.