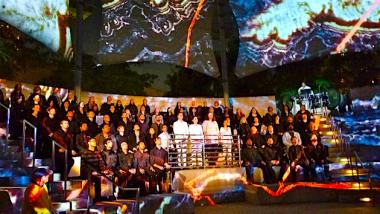 Andrew Norman — composer, academic, and director of the Los Angeles Philharmonic’s Composer Fellowship Program — began the first “Green Umbrella” concert of the orchestra’s 100th season Tuesday with something of a disclaimer.

“The burden is off me to curate a program that makes sense,” he posited, since all five works on the program were LA Phil commissioned premieres, and commissions are like Forrest Gump’s chocolate box — you never know what you are going to get.

The one thing they all shared was length, with no piece over 15 minutes. Reid’s Oscillations: One Hundred Years and Forever for chorus, percussion, and video enhanced lighting effects, was performed in the outdoor Keck Amphitheater of Disney Hall. The piece is only eight minutes long, but since it was performed over and over without a break it was like an endlessly unrolling scroll.

While there was no single work that really pushed the envelope, there was a fascinating diversity of stylistic influences, extended instrumental techniques, and emotional states of being, from the mystical to the clinically depressed. It was certainly the first time I’ve ever heard string player bowing on blocks of Styrofoam or seen musicians waving smiley emoji faces.

The concert opened with Ethan Braun’s The Lost Ones for brass quintet and electronics. The composer lists several influences from Samuel Beckett (referenced in the title) to U.K. rapper The Streets, comedian George Carlin, and Jimi Hendrix. With the exception of Beckett’s sense of alienation, the others were elusive.

The players stood or sat as far upstage as possible. The effect, the composer states, is as if “they’re at a bus stop in the middle of a desert.” He also describes the piece as “impossibly virtuosic.”

The Philharmonic’s musicians made Braun’s scattershot spray of notes make sense and were accompanied by a prerecorded track that alternately sounded like white noise, percussive jazz, and an infernal machine worthy of Fritz Lang’s Metropolis. The end, however, seemed a predictable punch line with the players coming together to produce a single harmonious chord.

The Sleeper and the Drinker by Carolyn Chen was by far the most traditional piece on the program, but in many ways the most satisfying for its diversity of instrumental coloration, atmospheric orchestration, and classical references. Scored for 15 players and flute soloist (LA Phil principal, Denis Bouriakov), the piece was conducted by Gustavo Dudamel.

From the opening entrance of the flute, the atmosphere evoked a sense of the mythic and the magical. You’re inevitably reminded of Debussy’s Prelude to the Afternoon of a Faun as the composition meanders through a botanical wonderland, a tangled jungle a la Henri Rousseau.

Along the way the wandering flute encounters a variety of instrumental flora and fauna, including a gamelan influence and the innocent, childlike plinks of a toy piano. Dulcetly conducted by Dudamel, the timid faun transforms, in the end, into a fluttering firebird.

During the pre-concert talk, Tina Tallon warned the audience there was not going to be anything light or uplifting in her piece, ...for we who keep our lives in our throats. It is a soundscape, she writes in her notes, “replete with the muted whispers, tortured murmurings, and choked admissions of those who have been forced to remain silent far too long.” It was impossible not to associate Tallon’s words and the dark, repressed emotions of her piece with the recent painful testimony of Christine Blasey Ford.

Daniel Allas’s to be tender was almost as bleak and dour. His compositional sense of less is more resulted in a piece that essentially went nowhere and took its time getting there.

Natacha Diels's Laughing to Forget possesses a giddy, circus-like energy. At one point, it turned into a goofy-footed march as if performed by a drunken fife and drum corps. Then when the climax arrived, it was time to wave those emoji smiley faces.

The outdoor performance of Reid’s Oscillations added a harmonious vocal component to the program. It was led by Seth Houston, featuring members of the USC Thornton Choral Artists, percussionist Sidney Hopson, and soloists Kelci Hahn, Angelica Rowell, Jodie Landau, and Joel Nesvadba. The atmospheric video projections that flooded over the singers were designed by Keith Skretch and Hana S. Kim.

Corrections: As originally published, this review misidentified the composer/sound designer Ellen Reid as a Canadian composer who shares the same name. It also misstated that Daniel Allas's composition included bowed Styrofoam. That particular sound was in Tina Tallon's piece.

The orchestra fills eight miles with a musical block party that showcases diversity.