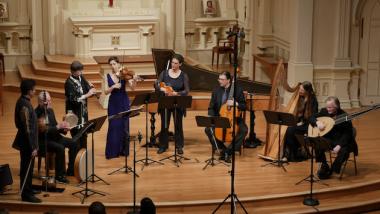 Every single concert that I have attended by Voices of Music (VOM), the versatile and multifaceted early music ensemble, has been an enriching experience that left me informed about a previously unknown (or perhaps unnoticed) aspect of this unique ensemble and its musicians, and of music history in general. Last Saturday’s performance at St. Mark’s Lutheran Church in San Francisco, under the title “Musical Crossroads,” kept that tradition going.

The concert was one of a three-part series last weekend that also included stops in Palo Alto and Berkeley. The musical crossroads during the concert were plentiful, and they reflected not only the geographical diversity of the pieces on the program, but also their differences in age. This was certainly not your average early music concert.

VOM-related new aspect No. 2 was the inclusion of non-Western repertoire and instruments, in the form of kamancha virtuoso Imamyar Hasanov and a selection of fascinating traditional works from his land of birth, Azerbaijan.

The kamancha is a bowed string instrument, roughly the size of a violin, but played upright. It is widely used in the classical music of Iran, Armenia, Azerbaijan, Uzbekistan, Turkmenistan, and Kurdistan. Hasanov plays his instrument on a long spike, standing up, with a tasteful bit of electronic amplification.

In the ensemble’s arrangements of music from outside of Azerbaijan, Hasanov and his kamancha gave the music an unmistakably Middle Eastern flavor, which made the VOM concert experience pleasantly reminiscent of performances by Yo-Yo Ma’s Silk Road Ensemble or Jordi Savall’s Hesperion XXI.

According to VOM co-director David Tayler’s (and others’) informative and detailed program notes, the concert was built around fiddle tunes through the ages. That led to beautiful, intimate moments like the 1805 Lament for the Death of his Second Wife by Niel Gow (1727–1807), the most famous Scottish fiddler of the 18th century. It was introduced by Laura Risk, solo, and accompanied by Bill Skeen, with Alana Youssefian joining on second violin and Tayler and Van Proosdij completing the setting.

Other highlights were the virtuoso duet (or duel) between Youssefian and Skeen in the Italian Ground section of the program. Cheryl Ann Fulton’s delicate harp opening of Music of Scotland; and the set of “crooked” fiddle tunes from Québec, played by Risk, who specializes in traditional music from that part of Canada. The tunes are called crooked because their phrases are not the standard four or eight bars in length.

An important and recurring aspect of the concert was improvisation. Several pieces on the program left room for one soloist or another to take the musical foreground, and the concert’s finale was a group improvisation on the centuries-old La Follia chord pattern.

Hanneke van Proosdij also incorporated the fine art of improvisation, pre-intermission, in her elegant new piece Musical Crossroads, based on an ancient Armenian church mode — even though she, in her own words, usually composes atonal music.

The “unusual combination of instruments ... is a new sound color experience for me ... Most of the music is through-composed, yet leavened with opportunities for improvisation,” as Van Proosdij beautifully put it.

She explored the material and employed her musicians so well that the resulting composition could have easily been mistaken for a traditional piece from somewhere between Iran and Northern India.

The camaraderie of the Early Music ensemble creates an intimacy that makes each performance a joy to watch.

Styles of Baroque dance are being brought back to life by a new dance ensemble, accompanied by veteran early-music instrumentalists.