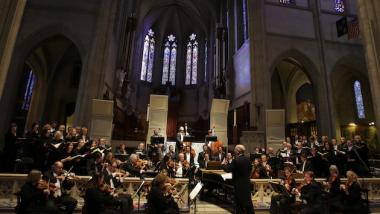 It is right there, in the fundraising materials of the American Bach Soloists, under “Why should I support ABS?”

Answer: “ABS’s music gives us strength during difficult times, with hope for a better tomorrow.”

The be-all and end-all of this phenomenal performance was, of course, conductor and ABS Artistic and Music Director Jeffrey Thomas, someone who completely embodies the music he conducts, as a composer friend and fellow audience member observed during intermission.

And I couldn’t agree more. Thomas is an internationally recognized Bach expert and interpreter, who has been running American Bach for close to three decades. He could probably conduct the Matthew Passion backward, in his sleep.

But I am glad he doesn’t.

The efficacy with which he channels his musical concepts to the members of his eminent ensemble is unbelievable, using a free-flowing conducting style in which time-keeping has become largely superfluous.

Instead, Thomas simply communicates his ideas and intentions to the musicians and singers before him via a series of encouraging and inviting hand gestures.

Which brings me to the remarkable way in which Thomas, and with him the entire organization that is American Bach, manages to find and nurture young talent, and hold on to them. No wonder that the performance roster for this St. Matthew was teeming with ABS Academy alumni and award recipients, past and present.

Among them was the stunning British tenor Guy Cutting, winner of the very first Jeffrey Thomas Award, in 2014. As the Evangelist, he was not only the lead character in the Passion proceedings but also the absolute gem of this performance (which was repeated in Belvedere, Berkeley, and Davis).

Cutting’s subtle delivery and clear diction were a joy and a delight, and his Evangelist expressed a perfect combination of detachment as narrator and involvement with (especially) veteran William Sharp’s profound and sincere Christus.

Without withholding millions of kudos to anyone involved with this Matthew, there are a few special acknowledgments to make, with first, the members of the orchestra — as always sublime.

Next, the impressive ABS Chorus (and Thomas’s insightful program notes), for radically changing my views on the importance of the chorales in the St. Matthew Passion.

Plus, in no particular order: Elizabeth Blumenstock’s violin solo in the aria “Erbarme dich,” sung by mezzo Agnes Vojtko; Vojtko’s beautiful duet with soprano Hélène Brunet in “So ist mein Jesus nun gefangen”; all the flute players and oboists; the members of the Pacific Boychoir (Andrew Brown, music director); and bass Jeffrey Fields for his supporting role as Judas.

Rarely have I attended an ABS performance, or any concert for that matter, that was so profoundly transforming and uplifting as this one. Regardless of how difficult the times may be, there is a better tomorrow.

Ragnar Bohlin puts his singers through their paces to sing Bach’s masterpiece on March 30.