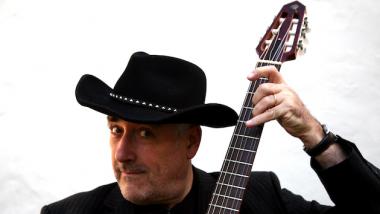 Commissioned to compose for the young teens of the San Francisco Girls Chorus, Fred Frith found himself looking toward his 70th birthday. The musical manifestation of his musings, titled Rags of Time, will receive its premiere on March 3, at the San Francisco Conservatory of Music. In what may be a revelation to fans of Frith’s clamorous departures from tonality and other musical conventions, the new piece harkens back to the composer’s own youthful experience in Anglican choirs in his native England, and to the words of religious texts and poems, which led him on to a bachelor’s degree in English literature at Christ’s College, Cambridge in 1970.

While an undergraduate, Frith also played guitar and other instruments in the avant-rock group Henry Cow, from which he later departed to record solo and relocate to the avant-garde music scene in New York City in 1979. During the next decade, he formed the Massacre trio with bassist Bill Laswell and drummer Fred Maher, and began writing for dance, film, theater, and experimental ensembles such as the Rova Saxophone Quartet.

In 1995, Frith moved to Germany to live with his wife, photographer Heike Liss, and two years later he began teaching composition at Mills College in Oakland, from which he only recently retired. His original works and performances customarily involved iconic manipulation of prepared instruments (particularly guitar), enhanced by electronic effects, in myriad and unclassifiable musical styles heard live and on over 400 recordings. Frith, whose speaking voice retains his roots in Sussex, pulled his vehicle over to speak with SFCV shortly before his departure for Europe, to work on a film soundtrack.

We should wish you a Happy 70th Birthday! That was yesterday, wasn’t it?

Yes, and thank you.

How did you celebrate?

With family. My three kids were there, and my younger brother and sister flew over from England. The day before that, we had a colossal party, which I’m still recovering from.

You’ll have some time for that on your own flight. What’s the film you’re scoring about?

It’s a Swiss production, by Johanna Faust, about generations of women and daughters. The filmmaker is in the film with her mother, her mother’s mother, and her own daughters.

It’s not your first score. How did you develop this one?

On all of them, I try to find some parallel, conceptually, to what I’m looking at. For example, in Rivers and Tides [dir. Andy Goldsworthy, 2001], I discovered that Andy was dropping a lot of ice, because his fingers were cold, and what you don’t hear in the film is the noise the ice makes. By sampling that, I turned it into a musical instrument, which I used to accompany the scene. In this case, because it’s about dysfunctional relations and the resolutions of them, I’m working with a basic conceptual idea that the music will be played, at the beginning, as if it were by beginners, so I’m looking for a beginner violin player to try to play a theme which will later be heard played by a concert violinist. [chuckles]

You’re dealing with females also in Rags of Time. How did this project develop, and how did it link into your own early musicianship?

At first, I was a little nonplussed about what I’d be able to ask young women to sing. I wanted text, but I really had no idea what was going on. I started thinking about what kinds of things I was doing and listening to when I was their age, remembering snatches of poems that always meant something to me, though divorced from their context. The “rags of time” is actually from a poem by John Donne [from “The Sun Rising”: Love, all alike, no season knows nor clime/Nor hours, days months, which are the rags of time.]. And there’s a couple of lines from a poem by Andrew Marvell, “To His Coy Mistress,” and John Bunyan. Since I sang in church choirs, there’s some Latin stuff I also put in there. And as it turned out, all of it seemed to have connections with the idea of “time,” and that seems to be very interesting, in light of the fact that I’m working with young women at the beginning of their adult lives, and I’m kind of at the other end.

How much is the music of the church itself manifest in Rags of Time?

Certainly in the more overtly tonal and classically choral writing. The idea of applying that oral tradition learning, which included singing in a choir but also playing violin in the school orchestra when I was a kid, all of those early experiences of playing collective music, the glorious anonymity, which I really loved, and taught me a lot. There’s a power of massed forces singing simple material, and that’s what you’ll hear. This is not an avant-garde work. [Laughs]

I noted that you’d put in some time before composing, getting to know where the girls are at. What did you find out?

I went up to their summer camp for a couple of days and did workshops with the whole choir, including the younger students, who are not going to be involved in this particular production. I worked primarily on improvisation, because they were all very interested to see what I would do.

What did you put them through?

Certain games, depending on the age of the student. You have to have the discipline to decide when to enter and when not, and to stop when somebody else enters. Listening is the key. We also did what I call the Rain Game, where you have three rules: The sound has to be as short as possible, every consecutive iteration should be at a different dynamic level, and you’re never allowed to sound at the same time as anybody else. It produces a kind of instant pointillistic pulsing body of sound. And the girls really got into that, and were very good at it.

And what did you pick up for your composition?

I was interested in getting a sense of how engaged they were, and what they were prepared to do, because I’ve worked with professional musicians who were very unprepared to explore things they didn’t already know. Classical musicians are notoriously blinkered sometimes. In my case, where I’m not a renowned composer, and I’m somebody coming from a different world — my background is rock and folk music — classical musicians are guarded. I’ve worked with many string quartets, and some I’ve found absolutely impossibly rigid, some have been a joy to collaborate with, because they’re open. A human quality that I almost prefer to any other is curiosity: Why are we doing this, what is it going to lead to? And these girls have that in spades. They’ve come to me individually and said how much they enjoy the music, and how much they like working on it.

It’s not just a matter of the girls being relatively inexperienced and not overtrained?

It’s more complicated than that, because in fact I found that they’re supremely well-trained and extremely disciplined, and very able to deliver a good performance of a score, regardless of what it is.

Did any of them share what they’ve found in you that they haven’t found elsewhere?

We don’t get into those kinds of specifics, they’ve very diplomatic. [Laughs]

Do they get any of your rock ’n’ roll elements in this score?

I would say so. There’s a percussionist, Nava Dunkelman, and a keyboard player, Evelyn Davis, who comes from a rock background and was a student of mine at Mills — an extraordinary performer — so I’m very glad that she’s on board.

A kind of dumb question, and probably not an original one: If you never studied composition, how did you teach it at Mills?

Well, I think teaching composition is not you learning how to be like me, it’s about you learning to realize your ideas. So if somebody comes in and says, this is what I’m trying to do, you can give them things that might be interesting to compare it to, you can provide resources of reading and listening, and you can work on craft, all of which I can do. But very often, it’s about challenging the assumption of composers, especially young ones, about how they’re going to realize a piece. You’d be surprised how often I’ve said to a composition student, have you ever thought of doing this in conventional notation? [Laughs]

Now that you’re done with Mills, what else do you look forward to accompanying at the inception of your eighth decade?

I still teach at the Musik Akademie in Basel, in Switzerland, in the spring semester, and the first thing I’ll need to do there is give a lecture on improvisation to the Baroque lute class. [Chuckles] I’ve got three days of performances in London and three days in Paris, and playing in Hamburg and Naples, because when I’m in Basel, it’s very easy to get everywhere. I have a three-week tour with my Trio [Jason Hoopes on bass, Jordan Glenn on drums] at the end of the year, with some guests. I’ll be continuing to work with Heike Liss, my partner. She does live improvised visuals, and we’ll be going back in November to the Southern University of Chile, in Valdivia, where we both teach.

Will you be here at the Conservatory for your March 3 premiere?

What family will you have with you?

Oh, I’m sure my better half will come along, and I might convince my son to show up.

Is he a musician?

I have two sons. One’s a chef and the other an economist. [Laughs]

And you have a brother who’s a music critic.

Simon — he’s a critic and a sociologist. He and my older brother always give me feedback. And if you want to expand on this subject: When they marked Simon’s retirement from Edinburgh University three or four years ago, Simon and Christopher, my oldest brother, who’s a neuroscientist, and I, had a round table discussion on what it means to listen, from the points of view of a scientist, a critic, and a musician. I believe you can stream it from the archives of Edinburgh.

It was unadulterated Bill Frisell, as the guitarist played solo with only his effects pedals as occasional accompaniment.

The groundbreaking guitarist talks about his musical odyssey and upcoming gig at the Fox Oakland.