Most people in this country don’t associate the accordion with classical music. In the popular imagination, the instrument is often considered a corny throwback, or associated with traditional folk music and ethnic dance idioms such as zydeco, polka, cumbia, or tango. It is not an instrument you expect to see listed as part of a chamber-music recital or symphony-orchestra concert. And although over the years there have been some classical accordionists, it has never been taken very seriously here.

Acclaimed Chinese button accordionist Hanzhi Wang, however, is intent on changing that, and she just might have the charisma, talent, and drive to make it happen. In 2017, she was the first accordionist to win first prize at the Young Concert Artists International Auditions in New York, which has led to concerts at many prestigious venues including Carnegie Hall in Manhattan and the Kennedy Center in Washington, D.C. She has won top prizes at numerous competitions, and in 2018, she made the first-ever solo accordion record for Naxos Records. You can get a taste of Wang’s proficiency, enthusiasm, and energetic style at the Bing Studio at Stanford University in Palo Alto on Sunday, February 16.

Wang, 29, grew up in Suzhou, in the south of China near Shanghai. When she was 5 years old, she heard the accordion played in an Italian movie her father was watching on TV, and was immediately taken with the sound. Her parents bought her a very small beginner’s model, and she began taking lessons. At 13 she continued her studies at the Tianjin Conservatory, and then moved to Beijing to earn her bachelor’s degree at the Central Conservatory of Music. She went on to earn her master’s at the Royal Danish Academy of Music in Copenhagen.

Currently living in Copenhagen, she is an assistant professor at the Royal Danish Academy and lectures and teaches master classes worldwide. I caught up with her recently by telephone and learned a bit more about her very unusual musical journey.

Did you listen to Western classical music growing up?

I heard a lot of Western classical music when I was a child. We had many collections from Deutsche Grammophon, so I started listening to a lot of orchestras and piano solos, and I’m also very much into choir music.

When you started playing accordion, were you playing classical music?

I played a lot of folk songs in the beginning. My accordion wasn’t as advanced as the one I have now — I started with a little tiny accordion, and you can only play limited repertoire on it.

How did that progress?

I went to a lot of international competitions when I was younger. My parents supported me, as did my teachers, my colleagues, and my classmates. I always wanted to be one of the best accordionists in my generation.

Did you study classical accordion at the Tianjin Conservatory of Music?

They did have a professional accordion program at the Conservatory so I started with a professor there, and then switched to the kind of accordion I am playing now [the free-bass button accordion). The repertoire is more extensive and more professional, so everything just completely changed.

Did you become more certain about pursuing a career as a professional classical accordionist while attending the Central Conservatory of Music in Beijing?

Yes, because all of my teachers thought I was one of the most talented students in the class, so they suggested to my parents that they take the chance to let me pursue music professionally. But everybody knows that classical accordion is not like classical violin or piano, which all have a professional path they can follow. It was going to be more difficult, with many unknowns and challenges.

Why did you choose to go to the Royal Danish Academy of Music in Denmark?

The professor who taught me [Geir Draugsvoll] was on the jury at one of the bigger competitions [the 40th Castelfidardo International Accordion Competition in Italy where she won first prize]. He is considered to be one of the really huge stars of accordion, especially classical. He came to talk with me and said, “I think the accordion needs you, so why don’t you come to Copenhagen to establish your career and see what you can do in the future?”

It was a life-changing decision to move to Copenhagen. It was eye-opening and completely different. Learning Danish and living as a foreigner there was a great chance in my life. I felt like it was the time to find out what kind of musician I was or what kind of life I really wanted.

What led you to compete in the Young Concert Artists International audition in 2017?

It was just by coincidence. Everyone here, especially musicians who I know who were born in the U.S., all knew the Young Concert Artists as one of the most critical agencies for young musicians at the beginning of their path. Three years ago, I came to the Manhattan School of Music in New York as a visiting scholar and a friend told me there were auditions. I signed up, and in the first round of the preliminaries they told me I was the first-ever accordionist in their 59-year history to audition. It went really well, and I got into the semifinals and eventually the finals. It changed my life, because now I get to play many concerts in the U.S.

Why do you prefer the button accordion over the piano (keyboard) accordion? Is there more repertory for it?

Why did you choose Hans Christian Anderson and the fairytales as the theme for your album On the Path of H.C. Anderson? 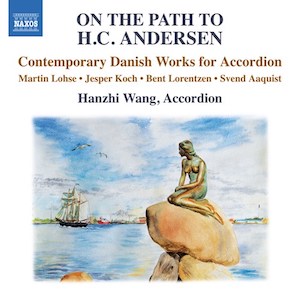 It’s because of the collaboration I have done with Danish composers. There is no transcription on the album. All of the works are dedicated to classical accordion, and The Little Match Girl [by Martin Lohse] is dedicated to me. I also remember when I was little, sometimes before sleep, my mother would read the Hans Christian Anderson fairytales to me.

Did making the record change your career?

Definitely. I released this record two years ago and there were a lot of invitations because of that album.

What will be on the program at Stanford?

At the heart of the upcoming recitals on the West Coast, there will be transcriptions from Baroque times, like Bach, Scarlatti, and Rameau. This music actually adapted to accordion really well, because originally they were written for the harpsichord. The second half will be more contemporary, with music originally written for the accordion.

Any plans right now for a new record?

I have already talked with Naxos, and we are planning to do something this year, and it’s going to be something new — accordion with a string quartet and some solo work.

Do you have any particular goals for your career?

I really want to establish the accordion as one of the professions in music schools and universities in the near future in the U.S. That’s one of my dreams, because there are none in the U.S. that offer classical accordion as a profession. I remember when I was younger, all my friends could go to Juilliard or Curtis, but as an accordionist, I didn’t have that chance. So I hope I can create the opportunity for the younger generation to be able to come to the U.S. and study the same as other musicians.

What motivates you to perform?

I feel like I am always being the ambassador for this wonderful instrument, and I really want to show its potential to people as much as I can.

What do you like so much about playing classical accordion?

I have worked for so many years, and when I am onstage, hugging my instrument and playing, I feel like I can express my inner feelings so well. It has accompanied me since I was very little, so it is a big part of my life. Nothing could replace it. 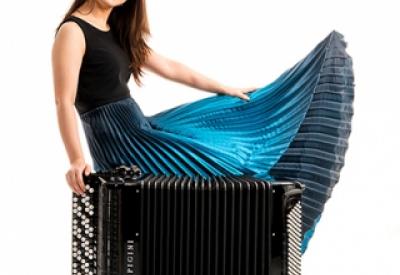 Hanzhi Wang: An Evening of Accordion

No waiting for the encores for the smiles and fun to appear: the guitarist and accordionist were on the same page from the beginning.