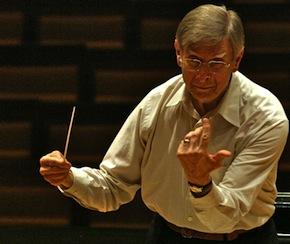 From his first San Francisco Symphony assignment, in 1984, Herbert Blomstedt became a podium favorite with audiences and critics alike. Today the award-winning conductor, who was the Symphony’s music director from 1985 to 1995, remains one of the Bay Area’s most beloved musical figures. Born in Massachusetts, raised in Sweden, Blomstedt led orchestras in Oslo, Stockholm, and Dresden before coming to San Francisco. Once here, he introduced audiences to new and previously unheard repertoire, including masterworks by Nielsen and Bruckner; initiated the acoustic renovation of Davies Symphony Hall; and raised the orchestra’s profile with Grammy-winning recordings and international tours. Now San Francisco’s conductor laureate, he maintains a full-time schedule of appearances throughout the U.S. and abroad. In the coming weeks, he’ll return to San Francisco for two programs: Tchaikovsky’s Symphony No. 5 and Mozart’s Piano Concerto No. 9 with pianist Garrick Ohlsson (Feb. 2–4), and Bruckner’s Symphony No. 5 (Feb. 8 and 10). Blomstedt, who turns 85 this year, spoke to SFCV from Paris, where he was conducting the Orchestre de Paris in music of Schumann, with pianist Till Fellner as soloist.

You’ll be one of the first guest conductors in San Francisco Symphony’s 100th anniversary year. What does it mean to you to be part of this season?

The San Francisco Symphony is a very special partner in my biography. I have conducted that orchestra since 1984, so it’s soon 30 years that we know each other. The orchestra is tremendous. Even the first time I played with them — I remember it was Beethoven’s Fifth Symphony — the way they played it was so impressive. Not only were they technically wonderful, but so eager to make music. I liked them from the very beginning, and that has not cooled off over 30 years.

How has the orchestra changed and grown over the years?

Of course, I don’t know how the orchestra plays when I’m not there. But I must say, when I come back I feel after only a few minutes that it’s my orchestra. I once asked one of the concertmasters — I think we were playing a Nielsen symphony — how could they play it so well when they had not played it for 15 years. And he said, “Well, that’s the reason. Nobody has touched it since you were here. When you are here, it’s already present in our minds, and it’s completely clear what you want.” It’s like home ground for them. Other repertoire they play in lots of different versions, but that’s good for them too. It’s good to have a variety of conductors. They get new impulses, new ideas. It opens up their ears and their hearts.

Nielsen was one of the composers you introduced to San Francisco audiences, and that was a significant contribution. What were some of the other memorable programs for you?

There were so many. Of course, we got our first Grammy with Carmina Burana. That was surprising to me, because I’d never played Carmina Burana before. I tend to steer clear of very popular pieces, but Decca, who was our recording partner, asked me to do it, and I said, “OK.” I worked on it, and I had a wonderful time learning it. It’s a flashy piece, but it’s very cleverly done. That was an inspiration for me. We followed up with the Brahms Requiem, and we got the Grammy for that, too.

When I come back I feel after only a few minutes that it’s my orchestra.

Another highlight was playing with Mr. Serkin, the father. It was one of his last concerts. He came to a gala opening and played the Beethoven Fourth Concerto — which, by the way, I play with Fellner these days. Of course, I had heard of Serkin all my life and admired him and his recordings, but I’d never met him and heard him live. Here he was, an old man, and so lively, such a wonderful person. I fell in love with him immediately, and I think it was mutual. He said, “I must play the Reger concerto with you.” He was a great champion of the Reger piano concerto. He grew up in Dresden under Fritz Busch, who became his uncle and helped him along with his career. Serkin had made his recording of the Reger concerto 40 years before, with Ormandy, and he wanted to redo it. He had new ideas about it. We were going to record it in San Francisco, and have the concerts, and then do it in Dresden. We made these plans, and after a couple of months he cancelled. He simply was getting sick, and he died the year after. That was a sad thing, but my time with him was certainly one of the highlights.

You brought the orchestra to the world, in those many tours.

We had good luck, and we had wonderful management. Peter Pastreich was a wonderful manager. He was a visionary, and when he got an idea, he would pursue it whatever the cost. He was also the one who hooked Decca as our recording partner. He took some tapes we had done for National Public Radio from subscription concerts and sent them to Decca. So we had a wonderful partnership for the 10 years I was there. The touring was another of Peter’s successes. Every year, we played major tours in Europe and Asia. It was a wonderful collaboration. You cannot do things alone. You have to have good partners.

You cannot do things alone. You have to have good partners.

When you’re here in February, you’ll conduct two programs. The first is Mozart’s Piano Concerto No. 9 and Tchaikovsky’s Fifth Symphony. Can you say a little about that program?

Tchaikovsky was a great Mozart lover. He even wrote three or four works he called Mozartiana, where he imitated Mozart’s style and left his own imprints on it. I think that’s important for the interpretation of Tchaikovsky. Tchaikovsky often tends to be played with lots of bombast. Unfortunately, the public loves it, so it tends to be bigger and bigger, and we forget that he was very delicate also. He hated sentimentalism. He was deadly afraid of writing sentimental music. And that’s the way much of his music is treated today, because the public loves it. It’s simply bad taste, and I think putting Mozart along with Tchaikovsky on the program helps emphasize this other side of him.

In the program following, you’ll conduct Bruckner’s Fifth. In San Francisco, your name is synonymous with Bruckner. Do you still learn new things from his music?

Yes. In fact, Bruckner’s First and Second symphonies, I had never performed before. The first time I played No. 2 was a couple of years ago, and the first time I played No. 1 was just a few months ago. They are fantastic pieces. He was so modern, earlier in his career. Our orchestras, and the public, know Bruckner only from the later symphonies. The first ones are largely forgotten. Of course, he gets more and more mature, and the later ones are absolutely great. But the first ones are so daring, so young, so modern. For instance, in the second movement of the first symphony you play for about two minutes before realizing what key it’s in. It’s sort of meandering, wandering music. Even if I play one of the later symphonies, it’s a new experience every time. It’s lucky that we have these kind of pieces, that never can be played to the extreme. We always discover something new.

What else is coming up for you this year?

There’s so much. I have concerts with the Berlin Philharmonic, three programs with the Vienna Philharmonic, the Amsterdam Concertgebouw, which is a wonderful orchestra. There are also concerts coming up with my own orchestra in Gewandhaus and with the Dresden Orchestra, my former love — I’ve been with them since 1969. I have concerts in Hamburg, Dresden, and Stockholm, and with American orchestras in Cleveland, New York, Philadelphia, and Los Angeles.