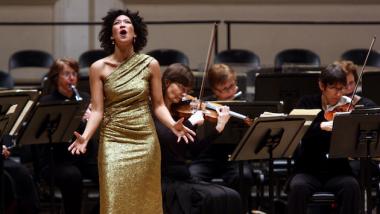 Julia Bullock Gets to the Heart of Things

Never in a million years will people viewing Julia Bullock as she strides the War Memorial Opera House floorboards as Dame Shirley suspect there is vulnerability undergirding every step. Nor will the 31-year-old soprano’s direct delivery of transparent tones in the world premiere of John Adams’s Girls of the Golden West, a San Francisco Opera production, hint at the fragile ego and self-doubt she’s worked hard to overcome.

The assumption will be made — even with keen scrutiny and by kindred spirits — that Bullock’s inner engine runs with conscious, creative intensity and is engineered with resilient intellect and the agile instincts of the tap dancer she, during her childhood in St. Louis, Missouri, trained to become.

And every part of all of that — the not so obvious and the apparent — will be true.

Even so, in a phone interview following a long day of rehearsals in early November, Bullock says, “I don’t have my youthful bravura anymore. It’s funny when that fear starts taking hold of you. I’ve had to address that part of myself early on.”

During a childhood she says was often unhappy, Bullock rarely listened to classical music. Other than Peter and the Wolf, which played as if on a loop in dance rehearsals, she was exposed to her mother’s ’60s and ’70s rock ’n’ roll, folk, and psychedelic music. Her father died when she was quite young, but left behind strong impressions of blues and jazz singers he favored. From her stepfather, Bullock received an eclectic mix of CDs: French opera singer Régine Crespin, opera and theatrical productions helmed by Sellars — a frequent partner of Bullock’s and whose libretto is featured in Girls of the Golden West — and recordings by American singer Nina Simone. “You can hear classical traditions, even in Simone,” says Bullock. “Those CD’s are still some of the most inspiring performances ever recorded.”

Admiring the artist’s natural voice production and “nothing-superaugmented” style of the albums, Bullock would sing along; a habit that continues. “When I’m trying out new repertoire, I listen and sing to a lot of recordings. I try to understand the clean and clear production of the singers.” Ideally, the recordings capture only the fundamentals and singers use uncomplicated sound to simply deliver the lyrics or libretto alongside the score. “I’m not paying attention to the beauty of the voice, it’s the directness of the delivery, the [unskewed] musical phrasing.” Bullock favors the word “transparency” as descriptive of valuable vocal sound.

In her role as Dame Shirley, she portrays a real life historical character; a white, educated woman who emerged from the Victorian era and was “stripped of privilege” as she moved across the United States from Boston to San Francisco. Working from archives that primarily include letters written by Louise Clappe (the real name of Dame Shirley), Bullock, as a mixed race 21st-century woman who identifies herself as, “half-white, half-black,” finds points of access. “Shirley [in her letters] shows she communicated with individuals for whom she had no reference points. She was a careful and sensitive observer of the world. She wrote about it with the most sophisticated words she could provide. Her wit has carried me through, kept me from getting pulled down. She has light, even in the dimmest moments.”

Dame Shirley, in her time, also led a nontraditional lifestyle in her intellect, if not in other ways. “I’m not living a traditional lifestyle either,” says Bullock. “I interact with new environments and personalities all the time. The interactions I seek out are intense. I want to get to the heart of people and things. She absolutely does that too.”

Bullock has spent considerable time thinking about the mostly white, European composers of the classical operas she often studies and performs — and struggling with thoughts about herself in that context. “I grew up in white culture and I didn’t want to be defined as a black woman in any way. The question occurred to me when I was singing 99 percent of material created by white musicians. While working on Josephine Baker, I thought about when I was told by my first voice teacher in college that I reminded her of Baker. I was also told to be more animalistic and stop being ‘heady’ in my music. It made me so angry. I thought, ‘No one is going to make me a black singer.’ It was coming from a place of bad shame.”

Now, she is finding repair in the very things she once tried to deny. “Part of that is exploring the undercurrents of my shitty feelings about being a woman. I have a voice that can speak to a lot of things. I don’t need to play to a particular role as a singer. I can use every bit of who I am in every role I play. That feels good, fluid, deep.”

Getting to the place where she can sink her hooks into a role has required gaining control of performance anxiety that is largely overcome with careful selection of roles and projects. “I’ve been blessed by the individuals I’ve had opportunity to work with. Because of the intensity at which they work, my learning curve has been steep,” she says. Sometimes, it’s the repertoire that guides her choices: roles she’s confident she can take on, music she can “hear” herself deliver, pressure she can manage. “Some things, I know I can sing in three to five years, but it’s not the right time now. Delivering your voice is about finding a deep openness and allowing yourself to be observed, as well as heard.” Mastering the breath control and purity of sound required to sing bel canto repertoire, says Bullock, is a future goal.

Listening is approached with far less caution. “The voices of children catch my ear. My sister had her first baby a year-and-a-half ago and it was amazing, hearing her go from laughter to crying. Even when she’s screaming, it’s this pure outburst of sound and expression. There’s no reserve. It reminded me that operatic singing, classical singing at its best — it is an open, human cry.”