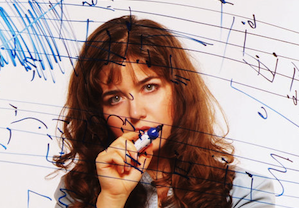 It would be impossible to discuss all of Lera Auerbach’s artistic endeavors in a single interview. Born in the Russian city of Chelyabinsk, near Siberia, Auerbach wrote her first opera at age 12. In 1991, she was invited to the U.S. for a concert tour; she decided to stay and to pursue piano and composition studies at the Juilliard School. Since then, Auerbach has become one of the world’s most intriguing Renaissance women — a composer, pianist, playwright, poet, and visual artist. This month, the New Century Chamber Orchestra performs Auerbach’s String Symphony, Memoria de la Luz. Commissioned by New Century, the work receives its world premiere May 23–26 in Berkeley, Palo Alto, San Francisco, and San Rafael, on a program that also includes Wagner’s Siegfried Idyll and Haydn’s Symphony No. 45, “Farewell.” In a recent call from her home in New York, Auerbach, whose Little Mermaid score was a hit for San Francisco Ballet in 2010, talked about the new piece, and the creative impulse that fuels every aspect of her work.

The New Century Chamber Orchestra is preparing the world premiere of your String Symphony, Memoria de la Luz. What can you tell us about it?

It’s a work for string orchestra, and it has six movements. The movements are connected, so in some way, it’s just one very large piece. A lot of it deals with the search for light, for silence — this original creative force that can be approached only in the sense of solitude or meditation. It’s a reach within and also an attempt to reach out, at the same time.

You’re the New Century orchestra’s featured composer this season. Have you and Music Director Nadja Salerno-Sonnenberg been colleagues for some time?

We have never actually collaborated together! The orchestra has performed some of my music, but this is the first year we have worked together. It’s been fantastic, but I’m looking forward to meeting her and the musicians face to face.

There are many different strands of your career — as pianist, composer, author, and visual artist. How did you develop these distinct areas, and how do you balance them?

Balancing is always a struggle. It’s one of the greatest struggles, and it’s my biggest hope. I don’t know if it’s achievable, but it’s something I try to figure out on a daily basis. I’ve been cursed and blessed with this need to express myself in all these different areas — in music, in literature, and in visual arts. When I was younger I was always asked to choose; even in music, between performing and composing, my professors would ask when I was going to make up my mind what I was going to do. Did I want to be a concert pianist or concentrate on composition? And, of course, literature is another area, and within literature, there is poetry and prose, which are two completely different activities. Until three years ago, I only wrote in Russian, and now I am writing in English.

If I too much concentrate on one activity, I get a sense of loss. I feel incomplete. … It’s not an easy way to live, because each of these disciplines requires 100 percent commitment.

So I am constantly asked when I’m going to make up my mind and concentrate on one thing or another, and at some point I realized I am never going to make up my mind, because they are all part of me. It’s like picking a favorite child. If I too much concentrate on one activity, I get a sense of loss. I feel incomplete. I need to be able to reach all these different forms to keep going. It’s not an easy way to live, because each of these disciplines requires 100 percent commitment. It’s not something that I recommend. At the same time, it’s my choice not to limit myself.

In the last few years, you’ve premiered several large-scale works, including, in 2011, your opera, Gogol. How did those works develop?

The last few years have been a clash of very big compositions, large-structure types of compositions. One of the main ones was the opera Gogol. It’s a very large, three-act opera, with full orchestra and choir. It was premiered in 2011 in Vienna. I also wrote the libretto for the opera, based on the play I wrote about Gogol, the 19th-century Russian writer who was a visionary. Some of the main conflicts of his life are very relevant today, and the main subject of the opera is the danger of religious obsession, and how an idea that may seem profound can completely turn the opposite of itself and bring someone to self-destruction. Also, last season I was composer in residence with Dresden Staatskapelle. I did several works there, and the main one was a Requiem Mass titled Dresden: Ode to Peace, which was based on the bombings in Dresden at the end of the [Second World] War. This is a very controversial subject, still very painful. When I was writing this piece, again I felt it was important not just to look at the history, but also at today and where we are in regards to war and peace and self-destruction. It became not so much a requiem, but a true ode to peace.

Here in the Bay Area, audiences last heard a major work by you in 2010, when the San Francisco Ballet performed The Little Mermaid. Will we also hear any of these new works?

Well, I would certainly be very happy if they were performed there. I would say sooner or later it will definitely happen. The question is when.

Do you still have a home in Russia?

No. I left Russia when I was 17. That was a dividing point in my life — such a sudden, drastic change. It was not a prepared move; it was a spontaneous decision at that moment. It has clearly divided my life into “before” and “after.” Since then, my home has been in the United States. I’m based in New York, and I spend a lot of time in Europe for different projects.

To me, music is communication. … What I try to do as an artist is just to be very honest with each piece. I don’t try to please anyone.

Have you been influenced by Russian composers in your own composing life?

I don’t think I’m consciously influenced. On a subconscious level, of course, it’s very much part of my heritage and my roots. It’s something that I grew up with. So I would say that yes, my music continues, in some ways, the Russian heritage. But it’s not something that I’m aware of.

So many young composers today seem to labor in obscurity, never really connecting with audiences. How have you been able to overcome that and reach audiences with your music?

To me, music is communication. Somehow I guess the intensity that I put into my work is able to translate to the listener, or reach the listener through the performers. It’s hard to tell. What I try to do as an artist is just to be very honest with each piece. I don’t try to please anyone; I don’t care to please anyone. I want my music to communicate, but ultimately it’s not even possible to please everyone. So one may as well give up any self-conscious notion — which can be a hard thing to do, but being self-conscious or taking safe choices can be a death sentence for performers. I see it happening a lot — these very careful, almost note-perfect performances, which are missing individuality and all sound the same and are ultimately very boring. For me, I would prefer risk-taking, and something where the performer is passionate, because the audience can always sense this passion.

I think it’s also true for composers. When I meet young composers, the questions they ask can be very puzzling. They want to know how you can please the audience, how do you make sure what you write is original? All very self-conscious questions. I think it’s important to make sure you remove your ego from the equation and really be a servant of the music, to be a servant of the next piece that is there, burning to be written. Go at each piece almost as a beginner, with a sense of passion, a sense of discovery and unpredictability. Then, if the impulse is pure, it will conflate to the audience. This may sound naive, but I think one needs to keep the original essence pure in order to be able to go on in the daily life of this profession, which always requires this kind of fire and idealistic approach.