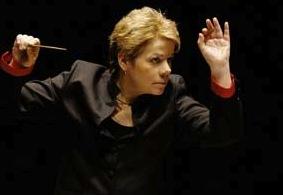 Catching up with most musicians and conductors can be difficult even in the best of times. Catching up with Marin Alsop is a challenge. She admits to logging about 20,000 miles in three weeks from her Baltimore home, the base where she serves as music director of the Baltimore Symphony Orchestra, to Sao Paulo, Brazil, where she has just been named the Sao Paulo Symphony’s chief conductor, to Portland, Oregon, to conducting the Netherlands Radio Symphony. Although she had returned home, she’ll be on the road again for the first two weeks in August — this time, to Santa Cruz, where she will be celebrating her 20th season as the director of the Cabrillo Festival of Contemporary Music.

Not that all this movement is unusual for Alsop. From her days as a toddler learning piano and then violin, she’s been busy in the musical world. Leonard Bernstein, who later became a mentor, inspired her dreams of conducting, but she also entered Yale at age 16 and then earned both a bachelor’s and a master’s degree in violin at Juilliard. While moving toward a conducting career, she freelanced as a violinist and started a 10-piece string swing-band. She’s served as principal conductor of the Bournemouth Symphony and music director of both the Eugene (Oregon) Symphony and the Colorado Symphony, while also guest conducting around the globe. Her position at Baltimore made her the first woman to head a major symphony in the U.S. She’s the recipient of any number of awards and recognitions. She also is a commentator on music for NPR and in 2005 was the first conductor to receive a MacArthur Fellowship.

It’s been 20 years at the Cabrillo Festival. Congratulations!

It’s hard to believe. When I met Dennis Russell Davies, he had served as music director for 19 years and I thought, Who would do that for 19 years? And now I’m at 20 years.

How have you seen the festival grow and change in the past few years?

It’s changed, but it’s not changed. The essence is the same as 49 years ago when it was started. It’s a celebration of the creative process and living composers. When I arrived, some standard repertoire was also included. I decided to return to the original mission and focus on contemporary music.

It’s been a gradual change, but the festival itself is an intense, compacted season. The time in between is when we make changes, but we try to keep them organic.

You have five pieces that have been written in your honor for this festival. That must be a gratifying feeling. Have you heard them yet?

I’ve seen the scores, of course, but not heard them. They’re very different in character, and very true to the individual composer. Michael Daugherty’s is pop-centric. Philip Glass’ piece is minimalist.

It’s so varied. I have my own personal preferences. I like rhythmic, high-powered music, but I try to stretch and use this as an opportunity to look outside my comfort zones to find works I wouldn’t gravitate to on my own.

I like to explore in-depth the contemporary music of different countries. America used to be considered the center of contemporary music. But now we have music at this festival from places like Scotland, Japan, and the Netherlands.

... a celebration of the creative process and living composers. I decided to return to the original mission and focus on contemporary music.For me, it’s important to champion the composer and his or her music. As my career expanded, I gained a connection to other countries — for example, Japan’s Shuko Mizuno. I was conducting in Japan and the orchestra took me to a Tower Records. They still have them there, and it was a huge, multistoried building. They started playing new CDs for me and I found this guy. Robin Du Raaff is a Dutch composer I started listening to because I conduct in the Netherlands. I wouldn’t have run across him normally. If I hadn’t heard of these composers, I wouldn’t have asked them to send scores to me.

Do you see more of a crossing of genres in music?

I’ve seen that for years, and the trend continues. What I find intriguing now is that young composers and artists of all types don’t restrict themselves to one medium. Visual artists are creating music and vice versa. There’s a further blurring of boundaries within the art forms themselves. Young artists are going to clubs and combining Bach Suites with performance art. It’s democratizing, in a way, a lessening of the rigidity.

The digital revolution is a different world, and really exciting. It frees people who are creative; they can create their vision in their kitchen and get it out there. Twenty to 25 years ago I started a string swing-band, and people thought I was nuts. Today, I’m watching this breakdown of walls between various art forms.

You grew up surrounded by music and began to play both violin and piano at a very early age. It was at a Leonard Bernstein Young Persons Concert when you announced you wanted to be a conductor. Did you have any idea what that involved?

My heart goes out to any young person choosing a career as a conductor. There’s a high level of frustration and an intense learning curve, and you feel very inadequate at first.

It was hard work, of course. My heart goes out to any young person choosing a career as a conductor. There’s a high level of frustration and an intense learning curve, and you feel very inadequate at first. You also have to think like an entrepreneur to find opportunities.

One doesn’t have an instrument to practice on. As a violinist, I could practice eight hours a day. You can’t do that as a conductor.

I would imagine it’s difficult to go find an orchestra that will assemble just so you can practice conducting.

I used to bother my friends. It’s a good thing we didn’t have caller ID or they’d never have answered my calls.

Receiving a MacArthur Fellowship must have been amazing. I’ve always heard it is a surprise to the recipients. Is that true?

It borders on the absurd. One thinks it’s a joke. They called at 8 a.m. and my son was screaming, “I want bacon.” I asked if I could call back.

What has the award allowed you to do with your career?

It’s fantastic on so many levels. It’s a vote of confidence, and it was a boost when I really could use it. It opens doors to conversations with people.

The money is instrumental in leveraging support for projects. It enabled me to start so many projects when I could put my own money in. I provided seed money for OrchKids. I was able to commission works. I could champion female composers.

I did want to ask you about the OrchKids project [which uses music and mentorship to help children in need overcome the challenges they face]. How is that going?

It’s fantastic, just great. We started with 30 kids and now have 300. We’re looking to open another location and add a couple hundred more kids. The kids didn’t see themselves with bright futures, and now they have big aspirations for their lives.

You also write and commentate for NPR. I really enjoy your writing and your on-air comments. Are you still involved with that?

Yes. Scott [Simon] is coming out to Cabrillo, and on Sunday night we’re going to interview each other. That should be fun.

You have degrees in violin performance and also studied piano and classical guitar; are there any other instruments you wish you could play?

I wish I could play everything. My father is gifted like that. He’d noodle around and then play any instrument. Not only was he concertmaster of the New York City Ballet orchestra, he also played viola, flute, clarinet, sax; he was the whistler on the Irish Spring commercial. It was so annoying.

I wanted to be able to play one famous lick on every instrument. I had a goal that every couple of years I’d master one thing, and then I could say, “Give me that clarinet” and I’d play the opening to Rhapsody in Blue, or “Give me that trombone” and I’d play Bolero.

I read that in high school you went from not understanding math to being a star pupil and doing rudimentary computer programming. If music hadn’t been in your life, do you think you would have gone that direction, or done something completely different?

I might have done math, but I’m not sure math would have held my interest. Maybe French. I love literature. Ultimately, I like working with people and in a social dimension. I’m always intrigued by the dynamics of working with a large group of people. I also like getting concepts and interpretations across to people.

What do you do in your spare time for hobbies, if you have any spare time?

I don’t have much spare time. My son is almost 8, so we’re practicing the violin together, playing Monopoly, and working on Harry Potter spells.

Good luck with those spells. You could really use the apparate/disapparate spells for your travel.

Yes, the last three weeks have been terrible planning.

Did you get overwhelmed by kids’ music when your son was younger?

No, not really. He dove right into listening. He loved the Ring right away, and The Flying Dutchman. He loves Wagner! He also loves John Williams. When he was 3, he said to me, “You have to listen to this because he brings all the themes back together.” I told him that I’d have to mention that to John Williams. He rolled his eyes and said, “You don’t know John Williams.”

Of course. Why would Mom know John Williams?

I’m going to have to get him to my house to prove that I do know him.

What are you listening to these days?

Have fun with the festival, and we’ll try to have good weather for you.

Thanks. It’s going to be better than Baltimore, certainly.

The Cabrillo Festival of Contemporary Music runs July 31 through Aug. 14 in and around Santa Cruz.