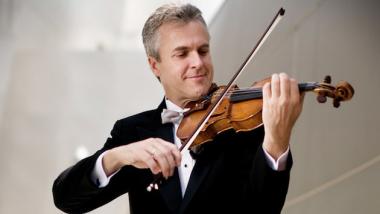 He’s not quite sure of the exact number, but violinist Martin Chalifour says that his upcoming soloist performance with the Los Angeles Philharmonic at the Hollywood Bowl (Sept. 3) could be his 24th time playing in that capacity. The concertmaster of the LA Phil since 1995, the 58-year-old French-Canadian violinist, who began playing the instrument at age 4, has enjoyed quite the career since graduating with honors from the Montreal Conservatory at the age of 18, before moving to the States to continue his studies at the famed Curtis Institute of Music.

Chalifour, who began his orchestral career in 1984 as associate concertmaster for the Atlanta Symphony, received a certificate of honor at the Tchaikovsky Competition in Moscow in 1986, and the following year was a laureate of the prestigious Montreal International Competition. Leaving Atlanta for The Cleveland Orchestra in 1990, Chalifour, who has also performed chamber music with the likes of Yo-Yo Ma, Emanuel Ax, and Yefim Bronfman, among others, has appeared as a soloist with such esteemed conductors as Pierre Boulez, Neville Marriner, and Christoph Eschenbach. Indeed, it was Esa-Pekka Salonen, then-music director of the LA Phil, who tapped the violinist for the concertmaster gig when Chalifour was 34.

Internationally, Chalifour performs a diverse repertoire of more than 60 concertos, has appeared as a soloist with orchestras including the Auckland Philharmonic, Australia’s Queensland Symphony, and the Hong Kong Philharmonic. Chalifour had just performed at the Orcas Island Chamber Music Festival when I caught up with him by phone at the Seattle Airport. Among other topics, we talked about his upcoming Bowl gig, his relationship with the LA Phil’s music director, Gustavo Dudamel, and his thoughts on beginning his 25th season as principal concertmaster of the Phil this fall.

You’ll be performing with French conductor Ludovic Morlot at the Bowl in a program featuring Chausson’s beloved violin staple, Poème, and Massenet’s “Méditation” from Thaïs. Are these pieces like returning to old friends and how is it working with Morlot, who has been conducting the LA Phil since 2007?

The Chausson is engrossing and beautiful, and it’s a piece I’ve grown up playing since I was 17 or 18. I try each time to do a different piece that I haven’t done before [at the Bowl] and I do believe I’ve done the Chausson before, because at this point, I am repeating something. But the Thaïs is an add-on and rarely do we do this kind of music that’s very well-known and very romantic. [As for] Ludo, he’s not officially our summer resident conductor, but we do see him a lot. The concert is going to be beautiful, and because Ludo is French, it’s almost something we can do without a rehearsal. The parts are simple to count and it’s a matter of working with flexibility. It’s also nice to spend some of the rehearsal discovering how soft we can all play something.

For soloists, it’s also pretty important to have a good rapport especially with a conductor and understand that the soloist has spent much more time than the conductor has on the piece — if not months ahead, in some cases it’s years ahead. It could be inconsiderate for a conductor to impose [his/her] views. It happened to me once and it was very disturbing. That’s why you have a soloist that doesn’t love to have a lot of rehearsals, because they don’t want the risk if they don’t know the [conductor well enough] to have things imposed on them.

How would you describe the life of a concertmaster?

I prepare music extremely ahead of time with the help of our library of the orchestra. It’s a complex process, because I’m the one who first decides what kind of string style and bowing style should be used in a piece and how it would best serve the music and the ensembles. What I decide really has an effect on the sound and togetherness. I have to be aware of musical styles, and it’s not so much what the conductor likes.

If we do a completely new piece, then sometimes I’ll be in contact with the composer — and one of my first business emails was to John Adams. It was the late ’80s or early ’90s, and we discussed tempos. It was also such a novelty since it was in the first days of email. But we do a lot, and there’s a lot to be aware of with being a concertmaster, such as changing things on the spot once the rehearsal starts. It’s very delicate and there’s little time to adjust for everyone to understand clearly what the changes are — the tempo, how we execute a passage, how much bow pressure we use. All those things can’t be written down.

If we’re rushing ahead and there’s another group playing in the orchestra, the question is how do we best make corrections. I have to do all that sometimes independently of what’s going on in the rehearsals. If the conductor is rehearsing someone else, we discreetly and quickly are passing messages verbally, so that we don’t disrupt the flow of the rehearsal. This is a challenge.

What is your relationship like with Dudamel, who’s celebrating his 10th year as music director of the LA Phil?

My relationship with Dudamel is very good. We’re in the process of planning another concert together at Disney Hall and I’m hopeful that’s going to come to fruition very soon. I trust him, he’s a wonderful accompanist, and the fact that he listens to the orchestra as much as he gives directives is wonderful. He’s very flexible, he’s got a great sense of style, and he understands all the different musical styles.

Looking back on the last season with the LA Phil, how difficult was it to learn so many new works on a symphony’s limited rehearsal schedule and what were some of the highlights for you?

It was really tough on everybody [since] there’s a good amount to learn. But we have developed a pattern of working on more than one program per week, though not necessarily increasing the amount of rehearsal time. I never sight read anything, but you need to be able to figure out things very quickly. With more and more experience, it becomes a matter of memory and short-term solutions that you can’t figure out while reading the music.

There were definitely highlights. We did big scores and got a fantastic work from John Adams. Also, the Tan Dun piece, Buddha Passion, was extraordinary for me. It incorporated dancers and special singers from Mongolia and the sounds were totally beautiful. It was a fantastic week and he’s a delightful man. I knew his music before and always liked it but not to that extent. It’s a very special piece. It’s out of this world — the novelty, the richness of it.

What are your thoughts on celebrating a quarter century with the LA Phil and what have some of the high points been for you personally?

It’s been fantastic and what a transformation there’s been with the orchestra. It’s always had great spirit and talent and things that have really pulled together. One highlight for me was András Schiff the pianist [and] it was actually a transcription from a violin concerto that Bach did. It was so amazing. We also had one encounter with him as a conductor. Another special performance was Bernard Labadie conducting with his [Les Violons du Roy ensemble and La Chapelle de Québec] choir from Canada in Handel’s Messiah.

Are you still playing a 1711 Kreisler Stradivarius violin and what music are you looking forward to performing in the coming season?

Yes, and [my violin] is sounding better than ever. I have gut strings now, which is fairly recent. They have a lot more sound color, a basic richness that’s not there with our normal artificial strings. We may use synthetic strings and they’re okay, but they’re just too convenient — like instant coffee — compared to the gut strings. If you put on gut strings, they’ll enrich the whole sound spectrum. I’ve tried different kinds of strings many times and they’re not powerful enough. Gut strings, if you believe in the process of them — the fact that they produce a more pure tone, that in itself will create more power, more carrying power.

I’m looking forward to everything! We’re doing a piece of chamber music in late October, and that’s the Hindemith String Quartet No. 1. It’s a piece I haven’t been aware of until a few months ago when I researched it and it’s written in the style of Brahms, in a way, but with clearer textures. There are also tours to Mexico City, London, and New York.

Getting enough rest is important [and] I find myself much more awake and physically in tune with my instrument if I work early every morning. Certainly, it’s being like an athlete and working just enough so you don’t injure yourself. Also, often, I’m cutting the amount of caffeine I have every day — and not having any alcohol for a few days — or a few weeks. It depends on the individual. It’s like running a race even if it’s not the most physical activity.

Is there any conductor you would like to play with that you haven’t yet?

Oh, my goodness. [Riccardo] Muti would be really fun — I would like that very much. We have played with [Valery] Gergiev, he has come to the LA Phil, but very few of us have worked with him at this point. [Riccardo] Chailly would be a nice one to work with. But I have had the chance to work with extraordinary conductors over the years — even in school, at the Curtis Institute. The last year in the life of Eugene Ormandy, with Lenny Bernstein, we had an entire week with them.

You teach at both USC and at Cal Tech. What advice do you give your students seeking a career in music and have you noticed a younger audience at concerts these days?

I tell them just to try to be as complete in their preparation of something as possible —to delve deeply into a score and know all of the components of the piece of music. Sometimes it’s too narrow a focus — on our solo line and nothing else. It’s a little bit dangerous. When preparing quickly, you can’t overlook history and the style of the piece.

They should also be very communicative and interact, and that you have to identify your own personal strengths, whether it’s new music, executing complex rhythms, or if you excel with a certain composer. Develop those skills and do not be afraid to share them. The more connections you make, especially at the school level, is also good.

There is a younger crowd — absolutely — for chamber music and another one for new music, which is quite a blessing in our city. The big part of that was due to Esa-Pekka [Salonen] and his vision. It’s been a wonderful mecca for new music.

An Interview With Alexander Barantschik: Playing Second Fiddle to None

Ballet Parking — Romeo and Juliet Commute to the Hollywood Bowl

Dudamel and the LA Phil team with LA Dance Project for an exhilarating take on Prokofiev’s ballet.