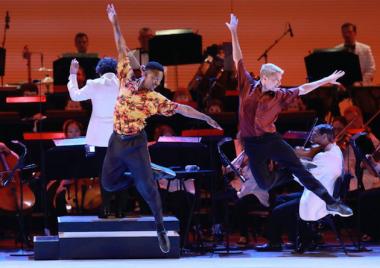 Ballet Parking — Romeo and Juliet Commute to the Hollywood Bowl

Back in October, choreographer Benjamin Millepied came up with an ingenious way to break the fourth wall and expand the ability to present dance at Walt Disney Concert Hall. As Gustavo Dudamel conducted the Los Angeles Philharmonic in Sergei Prokofiev’s ballet Romeo and Juliet, Millepied had his energetic cast of young dancers leave the stage while the action continued on live video projected on screens inside the auditorium.

The festive party scene, with its masked revelers took on a devilishly red glow in a backstage hallway. Romeo and Juliet’s romantic balcony scene was danced as a pas de deux in the terrace gardens, with the ballet’s tragic ending set amid the cryptlike space below the Disney Hall stage. It was immensely clever, skillfully choreographed, and technically innovative.

Assuming that lightning can strike twice, Dudamel, the LA Phil, and Millepied’s company, LA Dance Project, got their act together Tuesday and took it on the road to the Hollywood Bowl. Romeo and Juliet (David Adrian Freeland Jr. and Jani Taylor) discovered romantic bliss prancing among the cars in the parking lot. Mercutio and Tybalt (Aaron Carr and Nathan B. Makolandra) switchblade rumbled in the aisles (shocking more than a few picnickers), their images glowing on the video screens that flanked the stage. It may not have been as effective as it had been downtown, but the audience seemed to totally enjoy it and went with the flow.

There was also something in the style of Dudamel’s Technicolor conducting, the contemporary nature of Millepied’s choreography, and the costuming (aloha shirts and tennis shoes) that infused the evening with a distinctly Hollywood/Broadway feel — Prokofiev by way of Leonard Bernstein, Jerome Robbins, and La La Land.

Millepied, a former principal dance with the New York City Ballet, and a former resident choreographer at the Baryshnikov Dance Center, has been trying to carve out a dance presence in Los Angeles since 2012, when he founded LA Dance Project. No small task.

Millepied deserves credit for trying, and he has made some significant inroads, especially in his collaborations with the LA Philharmonic. As a choreographer, his style relies heavily on the youthful exuberance of his dancers to execute his thrust and leap style over star-turn balletic technique. His dancers certainly can’t match the level of dancing that was recently demonstrated by London’s Royal Ballet.

That said, the ballet parking-lot scene in which Freeland and Taylor embraced, entwined, and reclined among the cars, escalators, driveways, and byways that surround the Bowl was a dance/video tour de force.

Rather than devoting the entire evening to the ballet, the score was edited to fit into the second half of the concert. This meant deleting more than a few crucial scenes, including Romeo and Juliet’s secret marriage and single wistful night of wedded bliss.

Instead, following the truly murderous energy of the in-the-aisles knife fights, poor Juliet lay limp on the stage, apparently the victim of an overdose of grief. So it was only appropriate that Romeo should follow suit, and OD on drugs. Parting was not sweet sorrow.

This was the first concert of the summer that presented the orchestra at full strength, with Dudamel making his first appearance with Martin Chalifour as concertmaster. From the snare drum roll that introduced the national anthem onward, the difference was palpable.

The cinematic approach that Dudamel took to the ballet also affected the fiery performance of Dvořák’s Cello Concerto in B Minor, that opened the program with the young Spanish cellist, Pablo Ferrández as soloist.

This was Dvořák infused with a hefty dose of Wolfgang Korngold, Bernard Herrmann, and John Williams. You could imagine the opening credits rolling as Dudamel led the concerto’s lengthy introduction. Then Ferrández attacked the Allegro with swashbuckler intensity. The music resounded and echoed around the Bowl like a cannon broadside — Dvořák meets Captain Blood.

It was in the romantic strains of the second movement, Adagio, ma non troppo, that the young Spaniard from Madrid demonstrated the dulcet romantic side of his temperament. Then it was back to the fray for the virtuoso Finale: Allegro moderato. It all ended with a flurry worthy of the victory celebration at the end Star Wars.