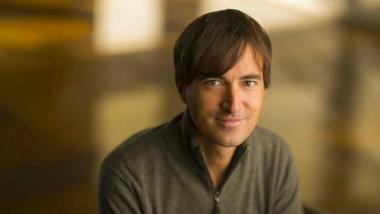 Mason Bates Explains the Why and How of Creative Concert Curation

The current pandemic has taken a hard hit on the performing arts. Banned from concert halls and clubs, performers have taken to creating events and streaming them online. For Grammy Award-winning composer Mason Bates (2019 Grammy for the opera The (R)evolution of Steve Jobs), this has been an even deeper time of contemplation about a concept he has been developing for years — concert curation. A DJ as well as an accomplished classical composer, Bates has been blending electronica with classical music in venues he has transformed to create multisensory experiences that go beyond just the music. These include MusicNow, a collaboration with the Chicago Symphony, Mercury Soul, launched in San Francisco clubs in 2008, and KC Jukebox at the Kennedy Center in Washington D.C., where he has been the composer-in-residence since 2015.

To further this endeavor, the 43-year-old innovator recently started a weekly online educational program through the Kennedy Center called “Curating the Concert Experience.” The series, which will include around five episodes, will explain and explore the elements he believes are necessary for creating an extraordinary and memorable concert experience.

I chatted with Bates from his home in Burlingame about his fascination with concert curation and what we can expect in the new program.

When did you start getting interested in concert curation?

Even at Juilliard when I was a graduate student, I started to feel that the way concerts were being presented left so many gaps in the audience experience that needed to be addressed. I was interested in a more fluid environment, and a concert that was a little bit more like a theatrical experience. I wrote a piece, Ballet for Stagehand, an electronic interlude that would soften the boredom between elaborate set changes in a composer’s concert.

Classical composers are not typically DJs. How has the DJ experience influenced your approach to live concert curation?

Usually composers are very solitary and focus on creating music, and don’t really have a public persona. When I came out here [the Bay Area in 2012], my DJing took off, and I started to look at events and the way people move through spaces differently than a classical composer might, and that’s when it really took off.

I started thinking about, “Is there a way a concert can be put together in a more fluid way, that offers exactly the same kind of depth that we get in a classical concert, but softens the experience a little bit?” That’s why I started Mercury Soul, as a more social, fluid approach to concert making.

What inspired you to create the “Curating the Concert Experience” program now? Was it the pandemic, or were you going to do it anyway?

I was seeing all these generous performances by musicians streaming from their studios and I thought, this is great, but in about two weeks’ time we’re going to get beyond that, and we’re going to need more than just a bassoon solo from a bedroom, so what can I provide and offer that people would want to see?

The other impetus is because we are locked down and we can’t make music, and it provides some perspective on the concert experience. I think that if we are going to survive and flourish, we need to address that.

Who is this program designed for?

I tried to position this as something for anybody who enjoys the performing arts from the inside or the outside — something that would be interesting for musicians, and for people who are in the business of putting on concerts. I also wanted it to be of interest to a wide audience — a little peek behind the curtain for anybody who likes live music.

The first episode talked about programming, production, and platform. Tell me about the role of each of these elements.

Programming seems simple but it’s like Italian cooking. If you change just a few ingredients, it’s a different dish. There’s a lot of decision-making that can inform the choice of music and the order you present. Overture, concerto, symphony is a great format, but doesn’t have to be the only format. Even in a symphonic concert, there are ways you could shatter the notion that every piece has to be full orchestra. The more the experience can be inviting, theatrical, educational and social in a fun way, then the more programming freedom we will have.

Production is lighting, stagecraft and information. Lighting is the easiest thing we can change right now. Even just subtle shifts between pieces or even movements — make it darker and more surreal — is a great way to create a flow to a concert.

Platform is like taking the orchestra, opera or ballet experience and saying, “I think that we can find a way to make our large institutional events more welcoming.” There are a lot of parts of that experience that are empty that we could fill up with cool stuff.

Do the principles in this program apply to the current situation as well as for the future?

I don’t think it’s outrageous to compare our model to live sports, where the live experience is fundamental to the whole endeavor. If you want to stream concerts so that people will come, they need to look a lot better — they need to have tracking cameras and better lighting and cinematic program interludes. All of the things that are going to make that possible are going to make the live experience much better too, whether you’re a musician in your bedroom or an orchestra.

How is this time period affecting you?

My spirits have been a little low, as this thing has extended past what I thought would be a couple of months. I’m also a little sad to see people driven to the digital platforms that already dominate our lives. It’s too bad this wasn’t a giant computer virus like Y2K.

What changes do you foresee in live performances as a result of this time period?

I think there could be some really wonderful things that come out of this, but I don’t think that everything will totally change. It might be a little slow at first, but we’ll see the audience return, and we have to take some of these first steps to make that experience more vibrant. I think we can do that. It will be a signal to people when they get back that we have taken this time as an opportunity.

Mason Bates Consults the Ouija Board for His Ghostly Auditorium

The wildly creative DJ and composer pairs processed recordings of a “dead” baroque ensemble with the S.F. Symphony performing live.

San Francisco Symphony gets electrified with a mixed-bill concert of Mason Bates, Rossini, and Beethoven.

The rave is in: Mason Bates’s first opera is a (re)sounding success, one that deserves permanent repertory status.