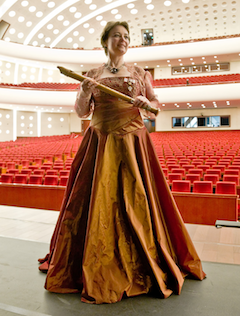 Michala Petri: On the Record(er)

Michala Petri embodies both the historical and the modern side of the recorder, playing everything from early baroque to contemporary music — and she does her best to inspire modern composers to keep writing for her instrument. She has commissioned dozens of new compositions, two of which have been nominated for a Grammy. One of them is up this year: The Nightingale by Latvian composer Uģis Prauliņš.

Petri has released more than 30 recordings and she gives concerts all over the world, often with lutenist and classical guitarist Lars Hannibal, her husband and musical partner since 1992. Even though they divorced in 2010, Hannibal remains the driving force behind many of Petri's musical projects.

She will visit the Bay Area twice over the next few weeks, playing a Baroque program on February 10 in a [email protected] concert, and a new composition by her current boyfriend, composer Sunleif Rasmussen on March 2, during the Other Minds festival of new music in San Francisco.

SFCV spoke with her via phone from her home North of Copenhagen, Denmark where it was a very cold Friday evening with a touch of snow on the ground.

In Menlo Park you will be playing a Baroque program with cellist Christopher Costanza of the St. Lawrence String Quartet, oboist Allan Vogel, and harpsichordist John Gibbons.

I am very much looking forward to it. I don’t often play chamber music with other musicians, so I enjoy it very much, especially with such excellent musicians as in Menlo Park. We play the same program in Portland, Oregon, on Feb. 8

You started playing when you were 3, appeared for the first time on Danish radio when you were 5, and debuted as a concerto soloist at the Tivoli Concert Hall in 1969, when you were 11 or so. Would you consider yourself to be a child prodigy?

That is what people called me at the time, but I have never considered myself to be a prodigy. I loved practicing, and everything felt quite natural. To me, a child prodigy was something of a miracle, like Mozart.

What role did your parents play in all this?

My mother helped me right from the start. She taught me the first fingerings and practiced with me every day. She supported me a lot. Both my parents are musicians, my mother a pianist and my father a violinist. They are very different in character; my mother is very systematic and my father more emotional.

Whom do you resemble most?

Both, actually. I think I have a good combination between my father’s sensitivity and my mother’s discipline.

It doesn’t seem that they had to force you in any way.

That’s right. I was told that when I was young I wanted to practice all the time. I don’t remember that myself, but what I do recall is the feeling the music would give me when I was playing. When you blow on a recorder, you get a response from the instrument through your ears. That response was very new and very immediate; I could instantly hear what I was doing with my breath. I still have that feeling.

Every instrument has its problems; musicians are dealing with reeds, strings and bows; instruments are frail, or heavy or bulky. I remember reading that your fellow countryman, jazz double bassist Niels-Henning Ørsted Pedersen (1946-2005) always had to reserve an extra airplane seat for his instrument.

I have actually performed with him. I recorded a CD in London, and he appeared as a guest musician on two tracks. We hadn’t seen each other for a few years and as soon as he arrived he told me that he had a bone to pick with me. He only heard my name in an annoying context; when people saw him with his big, bulky double bass, they would always ask him why he “hadn’t chosen to play the recorder like Michala Petri.”

I always need to bring many instruments, not just one or two. On stage I usually have 10 or 12 different recorders with me; different sizes, and they are different in sound. I mostly play the sopranino, soprano, and alto, but sometimes also the tenor recorder in concert, and occasionally also the bass, but the larger the instrument gets, the softer it sounds.

You play both Baroque and contemporary music. Did you ever feel the need to specialize?

It is always a question of communicating: What does this music mean, today, for this audience? I liked Baroque music very much when I studied, but for me it was also too limited. It always follows the same pattern. Contemporary music has so many different expressions, and I find that more challenging. If I had to choose, I would play only contemporary music. Performing new music has always been “my heart’s child,” as we say in Denmark.

You have developed new playing techniques for the recorder. Can you explain?

What you need in modern music is more expression — larger dynamic possibilities. It is very hard to make dynamic changes, like crescendo and decrescendo, on a recorder because when you play softer, the pitch drops, and when you play louder, the pitch rises. But I found out that if I make a little glissando upwards, when playing diminuendo, the tone stays the same. I adjust by pulling off one of my fingers just a little bit.

You have commissioned a lot of new works for the recorder. Do you have to go to much trouble to convince modern composers to write for your instrument?

Not anymore, but I used to. Many composers were a bit hesitant at first, but when they tried it, they mostly liked what I did. If a composer doesn’t want to write for the recorder, they usually say they “don’t have time,” because composers are polite people. But I have had quite a number of them write music for me. One of them was Malcolm Arnold. He had stopped composing completely when I met him, but I didn’t know that. So when he came backstage after one of my concerts, I asked if he couldn’t imagine writing something for the recorder. He said, “maybe,” and I was asked to visit him at his home the next day. After my visit he started to compose again. I was very happy about that.

Do you ever get tired of a certain composer or a piece of music?

[Long pause] I am very good at liking what I do. But it could happen in real life — maybe when I am on tour and play the same little piece 20 days in a row. I might feel that I cannot get into it again. But every situation is new to me, because I perform for a new audience and in a new location. Today is different than yesterday, and people listen with different ears. Maybe something terrible or something wonderful has happened in the world and everybody is in a different mood. It is not just a question of performing a piece the correct way. To me, it is always a question of communicating: What does this music mean, today, for this audience? The communication through a piece is always different.

I would like to take a little look inside your mind. When you play something from memory, where does the music live? In your mind, or fingers? Do you see notes before you?

It is partly finger memory; I have different systems of practicing, so that the music really gets to sit in the fingers, like reflexes. But it is a combination of things. I usually know if I am on the left page or the right page or at the top or the bottom. It is mostly that the music is in my system, in my body. Sometimes, if I am in doubt about how a piece continues, I try very consciously not to think, and hope that my fingers will carry me through. And mostly, touch wood, it happens!

I am actually surprised at how many pieces I remember, especially music I learnt when I was very young. After the concert in Menlo Park I am going to New York, to perform and record six Telemann sonatas with [harpsichordist] Anthony Newman. A while ago, when I started to prepare, I found myself somewhere with my recorder but without the music. So I just started playing through the sonatas and realized they were all still in my memory. And I hadn’t played them since I was 24, maybe 25 — 30 years ago! And then, sometimes I don’t remember what I did yesterday….

I read somewhere that you have an interest in jazz music.

I like listening to jazz, and it always was my secret dream to learn to play jazz music. I studied it at some point, you know, with those Music Minus One CDs, or LPs at the time. I practiced all the scales and everything, but I never got good at it. I was probably thinking too much about what I was doing.

I admire people who can improvise; Keith Jarrett considers it the highest form of music making, and I understand exactly what he means. Improvising is about being completely open to what happens in the moment. When I play, I try to approach a piece as if I am improvising, even if it sounds exactly the same to the audience. I don’t just perform — I reexperience the music anew every time I play.