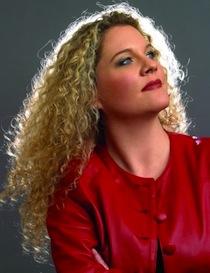 Since her San Francisco Symphony debut in 1995, Michelle DeYoung has returned to the orchestra to sing a wide range of works, from Adams to Mahler and Wagner. This week, she’s back to sing the role of Judith in Bartók’s searing one-act opera, Duke Bluebeard’s Castle. Conducted by Michael Tilson Thomas and semi-staged by director Nick Hillel, the performances also feature bass-baritone Alan Held in the title role. Completing the program, June 21-23 at Davies Hall, is Liszt’s Piano Concerto No. 1, with Jeremy Denk as soloist.

The Michigan-born DeYoung, who lives in Colorado with her husband, Allan, has made Judith a specialty — she’s sung the role in concert halls and opera houses around the world. This production, which features Hillel’s videography, was premiered in the UK by the Philharmonia Orchestra in 2011. Tilson Thomas conducted the New World Symphony in its U.S. premiere earlier this year in Miami. DeYoung, who appeared in both, spoke with SFCV by phone from Cleveland, where she was singing Verdi’s Requiem with the Cleveland Orchestra.

Great to have you back in San Francisco, especially for Bluebeard’s Castle.

It’s such a great piece. I was thinking of it last night, while I was onstage doing the Verdi Requiem. For me, both pieces are like rock music! They’re both amazing. There are parts in the Verdi Requiem, like the "Dies irae," that are so haunting. But there are these long lines, and the chorus is screaming, and the music is pounding. I don’t sing that part, of course, but it’s so exhilarating to be onstage and be part of it. There are parts in the Bartók that are the same way.

Tell us about this production. It premiered in the UK last October?

It did, and it has transformed since then. Nick made the videos, and they’re pretty much the same, but every venue is different. When we did the London tour, we were in front of the orchestra, and they extended the stage; the video was behind. When we did it in Miami, they didn’t have screens — they used parts of the walls for the video, so it was everywhere. The stage was behind the orchestra for that, and I think that’s what they’re going to do in San Francisco. It gives me chills to think about it. It’s just overwhelming, the way it represents what you’re listening to. The very beautiful parts are so beautiful, and the creepy parts are so creepy. It’s really powerful.

Have you sung it with Alan Held?

I haven’t, but I’ve sung with him in other productions. We get along great, so I think it will be wonderful. I’ve done this piece with different basses, and it’s different with each one. It’s such an intimate relationship between Judith and Bluebeard that I find my character changes with every bass I do it with. I did the big tour with Sir John Tomlinson. Since then I’ve done it with Eric Halfvarson, Matthias Goerne, Sam Ramey, Falk Struckmann. Every time it’s a different relationship. With John Tomlinson, at the end it made people cry because we were both so heartbroken at what we’d gone through. That shocked me, but that’s how our relationship was as these characters.

You don’t have a lot of time to develop character. It’s so brief and intense. How do you approach Judith?

It’s funny that you say that, because that’s not how it feels at all. The way Bartók wrote it is so natural. It starts a certain way, and through the lines, what you’re saying to each other, you can feel the doubt coming in. It’s very psychological. I think my interpretation is different than others, because I’m different than others. We bring to our roles part of who we are. I try to find that character in me, and try to bring that to life.

It’s transformed since I began doing the role. I did a very bizarre production in Salzburg. Falk Struckmann was the Bluebeard. We had no set, and Falk was in a wheelchair, and I was his nurse — in a very short nurse costume, with high heels, of course! I was all the women.  It was a totally different turn on it. When you do a production that is so different than how you interpret it, it opens your mind in different ways. While you’re doing it, you’re like, "I totally don’t agree with this"; then it’s over, and all of a sudden you understand the character on a very different level.

The language is quite challenging, isn’t it? Have you sung in Hungarian?

This is the only time I have sung in Hungarian. I don’t know Hungarian at all, and it took a long time. I have a good friend in Los Angeles who is Hungarian. His sister is a mezzo in Budapest, and he had her make me a CD. All she did was speak my role. Her husband is a pianist, and he coached me on it. That was how I started. I still have that CD, and I go over it every time I do the role. It just got better and better, and now I love it. It’s quite a sexy language, in my opinion.

This role is kind of on the line between mezzo and soprano — it has that frightening high C.

I am still a mezzo, and I will always be a mezzo that sings soprano roles. A lot of my roles — Kundry, Venus, Sieglinde — are done by both. This role sits perfectly for me, and it’s actually the perfect high C. When I first looked at it, I was like, "oh my gosh." But it couldn’t be better. You don’t slowly go higher and higher and then sing it, which would be killer for a mezzo. The orchestra is so loud, and the way it builds up to the chord, you feel safe. I did this with James Levine a few years ago. I looked at him and said "I don’t think I need to sing that high C — I don’t think anyone can hear me." And he said, "Michelle, sing the high C." [Laughs.]

Shirley Verrett sang the first Met performance. Do you have a favorite recording?

I haven’t heard that, but I absolutely love her. I haven’t listened too much to recordings of it, because I like it to be organic. I usually listen once to hear the orchestrations. But I bought a recording of Boulez conducting it, and that was Jessye Norman and László Polgár. I can’t say it’s my favorite, though, because I haven’t heard all the recordings.

Color is so important in this opera, as are the minor motifs — especially the “Blood” motif.

One of the things that makes this piece so exciting is that it all comes together. Bartók wrote the music exactly like what’s happening in the story. Even if you didn’t have the text, you can hear everything that’s happening. I love that. It’s so tone-poetic. Everything’s beautiful, then all of a sudden you hear a tritone, something representing something wrong — there’s blood somewhere! [laughs]. Even in the moment of the high C, it’s just amazing, with everybody blaring away. When you see the vastness and the beauty of what he has, it’s so well represented, both in the music and the libretto. They’re hand in hand.

It is modern, but not in an atonal way. I have to say, I think people get a little nervous when they hear Bartók. But it’s some of the greatest music around. Everything I hear of his is remarkable — the piano concertos, the quartets — it’s just brilliant writing. There’s still some stigma with Bartók, but people hear it, and they say "OK, that’s like the coolest thing I’ve ever heard." People need to give it a chance, because it’s so exciting.

And still timely — especially in an election year, with wives all over the country standing by men with skeletons in the closet.

Yes! The psychological aspects — I mean, I did that with my husband when we were dating. I was like, there’s something he’s not telling me! Just the non-trusting. Unfortunately, we’re such a fearful people that we grab onto the negative easily. I think that’s what Judith is doing. She loves him, and she thinks "If you just tell me everything, give me all those skeletons, we’ll be fine." For him to open up that much is too much, and there’s nothing left for them.