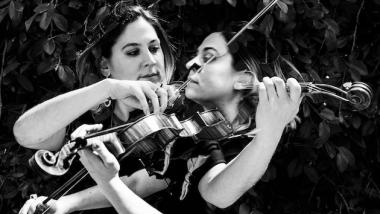 Sirota looks forward to her next guest performances with a number of the world’s leading orchestras, and to rehearsing commissioned works that often involve the chamber sextet yMusic or the Icelandic recording/performing collective Bedroom Community. Her roster of past work includes projects with artists as varied as Arcade Fire, jónsi, Dirty Projectors, Grizzly Bear, Jose Gonzalez, Ben Folds, Paul Simon, and others.

Add to that Sirota’s enthusiasm about her Peabody Award-winning Q2 podcast, Meet the Composer, which features radio interviews with new music colleagues like Meredith Monk, Nico Muhly, Caroline Shaw, and Matmos. As the New York Philharmonic’s first-ever creative partner, she will curate or host nine concerts that highlight contemporary composers during the Phil’s 2018–2019 season.

Which is why Sirota’s upcoming appearance in San Francisco Symphony’s SoundBox series is remarkable. Joined by members of the symphony, Sirota performs composer Daníel Bjarnason’s Sleep Variations. The just-under-15-minute piece is a spacious, surreal oasis of high and low energy that closes Act I of Dream State, the opening work in the fifth season of SoundBox. Curated and conducted by Edwin Outwater, Dream State includes music by Ravel, Fauré, Mauricio Kagel, Deborah Harry, Salvatore Sciarrino, Laurie Anderson and the world premiere of a new work by Owen Pallett.

Sirota broke away from a family luncheon in Maine to speak with SFCV by phone.

In the hour just prior to this interview, will you describe the sounds you recall hearing?

I am hanging out with my family. We were having lunch in this little restaurant and I was listening to the door squeak open, the wind come in, and a bell on the door. My nephew was talking about hip-hop. He has a brassy voice, like someone who has smoked three packs of cigarettes a day, although he’s only 11 and no, he doesn’t smoke.  His voice is high, like a countertenor, but has a sub-harmonic element that’s lovely. Right now, I’m hearing icicles drip onto the pavement.

In general, what sound landscape outside of the workplace do you experience daily or construct for yourself in your home?

Oftentimes, I’m in compete silence when I’m home alone. But with my fiancee, if we stay in, we listen to classical or talk radio. My tiny little apartment is on the flight path to La Guardia, so sound is interrupted by that, but otherwise it’s intensely silent.  I’m not really hearing anything in that silence. I’m in my head, in the frantic space. Because there are so many things to do.

Describe the first time during your childhood you remember noticing harmony, melody, or rhythm in music.

I didn’t start thinking about music in a formal manner until I was a teenager. At home, the sound of my father [composer Robert Sirota] working on music he was writing or my brother practicing meant that music was very functional. We did it actively, not passively. High school is when I discovered popular music and discovered that a personal pursuit with music was possible. It’s the only stuff I listened to in my house. It was alternative rock, like Nine Inch Nails, Tori Amos, MTV stuff.

Was it at the same time or age that you began to appreciate energy, tone, or emotion in music?

No, that was baked into me way earlier than my teen years. My mother [Victoria Sirota, an organist] and father are musicians, so I don’t remember consciously discovering music. It was just always there. That means the ability to perform or communicate through music is not something that I found; it’s something that I had.

Does this mean you don’t have anxieties as a performer?

That’s an odd question for me. Anxiety is something I work not to have in my life. It’s not something I foster and hold onto.

[While performing] I want to be the proxy, to understand how music is put together and show where the structural points are. I want people in the audience to have an interaction with something structural in real time, to get it, to feel what they want to feel. It’s my goal to make it as legible as possible in real time. I’m concerned with making something communicative.

Please tell us about your new position as creative partner with the New York Philharmonic: What are your priorities for the events you will host or curate?

There are two series. [Sound ON, three afternoon chamber concerts, and Nightcap, six post-concert interactions with composers whose work has been performed just prior to the cabaret-style event.] One series is a showcase for musicians of the Phil, the other one for the composers writing for the Phil. The Sound ON [events] take their inspiration from the actual programming. They had something similar before, but the concerts were sometimes unrelated or far afield from the main programming. For these, I’ll be inspired by the three programming pillars of the subscription series and constructing music concerts inspired by them.

[For] the late-night series, I’ll grab the composer who’s had his or her program performed. She’ll curate her work. You’ll get to know the person a little better than you would just by listening to her work.

Classical music is so often put into a shiny, pretty box that doesn’t feel touchable or tangible to audiences. These series are a time to understand that these are things created by people, things of beauty made by humans.

Please talk about the SoundBox show and the piece you will perform, Daníel Bjarnason’s Sleep Variations.

It’s a piece written in 2005. He’s a fantastic composer and part of Bedroom Community, a collective I’m in also. We worked on a version, the original, of this piece written for solo viola and 10 additional violas for my record, Baroque. For that, I recorded all of those eleven violas. [They were then overdubbed for the final recording.]

What do I appreciate in his music? He creates textures I’ve never heard before. He has smart builds and satisfying structures. He takes unfamiliar things and puts them together in ways that feel familiar but are really new. It’s textural: changing the string production to get an unfocused sound, layering that with other sounds to create very beautiful color. It’s nothing unconventional, but it’s new.

This version with the San Francisco Symphony will be for all strings, with violins for the high parts and, for lower parts, cello and basses. He pulls everything to a wider width for the arrangement. The original version feels like it’s me and weird directions in me; this one is my voice being swallowed up by the dreamscape and getting carried within that.

In prior interviews when speaking about being a performer, you talk about your experience and role as an intermediary between the listener and the composer.

It’s an interesting thing because you’re balancing your desire to express the composer’s intentions and at the same time your artistic juice. It can yield another kind of synchronism: it’s like a cocktail with an interesting garnish.

In general, you get good results by trying to understand how the piece is put together and being present to the performance. In a performance scenario, unlike in rehearsals, you have just this one shot at it. Instead of thinking about where you’ll have dinner afterwards, or worrying about staying on the note, or something else, you keep your head with your body. To me, that’s a special place. I love performance for that reason.

How often is the sound you intend to produce realized in the actual sound you make?

It’s always a process of negotiation. The viola becomes a part of your body, almost like your foot. You can’t always control or know what it’s going to do. It’s listening and responding, being present to what’s happening and what’s coming out of the instrument. I’ve spent the past 30 years learning how to do that. It’s a product of working hard to master a skill, like with anything.

What role do ease and relaxation play in successfully rehearsing, performing, maintaining your physical health. What mental or physical health practices or activities do you regularly employ to maintain or achieve fluidity?

Outside of that performance moment when there are tons of chemicals coursing through your body, I meditate and knit in my off time. It’s hard to recreate the cocktail of chemicals in your body when you’re onstage. Performing more makes it more predictable to know what it feels like, but it’s also always unpredictable, exciting.

If women composers are receiving more attention and opportunities, is it a moment or a movement? Is the change temporal or permanent?

Women have a lot more power and visibility in every arena right now. I hope it’s not a moment, I hope it’s an urge toward more equality.

As a female musician do you feel an obligation to present, produce, promote, or support women artists?

Everyone needs to really, really try. When you’re picking projects, you tend to pick the stuff that’s right in front of you, you pick what’s on your mind. We need in front of us a more representative swath of humanity than the white men who’ve had opportunity in the past. If that means deliberately thinking more often of women and people of color to make that happen, then that’s a great pursuit and worthy.

What can you say about classical music and finding or developing new audiences? Beyond moving beyond traditional programming and venues, what is an effective way to keep classical music vibrant and alive?

For people who don’t know about classical music or people who are interested in becoming fans and not just listening to it as homework, music written by musicians in our time, by our peers is a wonderful entry point. Like architecture, film, dance, or anything, it’s the same. If you trace from contemporary back to classical [forms] through people who’ve been influenced by it, that’s good. When art is living art, it’s more attractive. I’d love for people to listen to classical music in that way.

Despite wrinkles in the format, the Symphony's hip new series continues to impress.