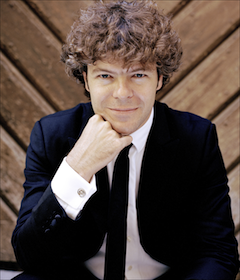 Since his first San Francisco Symphony appearance in 2010, Spanish conductor Pablo Heras-Casado has impressed audiences with his command of works spanning the Baroque era to the present. He returns to Davies Hall Oct. 3–13 to lead a festival pairing music by Mendelssohn and Thomas Adès. Inspired by themes drawn from Shakespeare, dance, and the Baroque, the programs feature the first San Francisco Symphony performances of Adès’Three Studies From Couperin, scenes from The Tempest, and Mendelssohn’s Die erste Walpurgisnacht. The two-week festival finds Heras-Casado, who was appointed principal conductor of New York’s Orchestra of St. Luke’s in 2011, at the start of an eventful season that includes debuts with the New York Philharmonic, the Philadelphia Orchestra, the London Symphony, and the Metropolitan Opera. He spoke to SFCV from Leipzig, where he was conducting the Gewandhaus Orchestra in works by Mendelssohn.

You’re coming back to San Francisco for two weeks of concerts, conducting music that spans the centuries, from Lully to Adès — with a lot of Mendelssohn in between. What are the connections?

When I find a combination having the right argument or the right dramaturgical connection, from a historical or intellectual point of view, that’s something I like to do very much. One of the programs we are doing connects Shakespeare with Goethe, and Mendelssohn with Adès . Mainly, I’m interested in putting together great composers and great music that lets the audience have an exciting experience. I think of the concert not as a collection of wonderful pieces, but as an experience from beginning to end. In this case, these two figures of Mendelssohn and Adès are great, important figures, each in his own time. But both of them still need to be somehow discovered by a big part of the audience. That may sound a bit strange for Mendelssohn, but it’s the case that Mendelssohn is not as often performed in the concert hall as Brahms or Schubert, in his full dimension at least. His Die erste Walpurgisnacht is one of the greatest pieces of the Romantic literature, and audiences — and even many musicians — don’t know it. So for me, it’s exciting to challenge the audience and rediscover these pieces.

You became interested in Baroque music at a fairly young age. What was the attraction?

That was something quite direct. My first important experiences in music were as a singer, when I was a boy. I discovered some pieces of 16th-century polyphony, and I was — even before knowing it was an early-music piece, or knowing the composer — that style, that sound, that aesthetic, always fascinated me. No matter the kind of choir I was singing in, the fascination continued, and when I decided to become a conductor, that was a natural way for me to start researching and having my first conducting experiences.

I’m interested in putting together great composers and great music that lets the audience have an exciting experience.

It has to do with that immediate pleasure of singing, its connection with the texts and the emotion, the closeness of the text with the music, the straightness of the means used in the polyphony of the 16th century. Baroque is a very general label — you cannot compare the early Venetian Baroque with the late Baroque — but in any case, there was a very open-minded and experimental field for composers at that time. Things changed very quickly from one era of the Baroque to the other. That interested me a lot.

You’re also known as a committed champion of contemporary works. Is Adès at the top of your list of living composers?

Yes. It’s been a few years now since I had my first experiences with Thomas Adès’ music, and he is one of the important and main figures of composition today. He’s someone who balances very well a strong, honest aesthetic. This is realized in his writing and his sound. He connects with audiences, not betraying his ideas, his principles, or his personality. This is something very important for a composer and, again, he has a very strong connection with Mendelssohn. I think placing him beside these older composers puts him in a new light. I always like to bring his music to light, to discover new perspectives of his music. Both Adès and Mendelssohn share a fascination with Baroque music, and both of them are very cosmopolitan personalities. You can feel and hear that in their music, even if they are separated by two centuries. They’re open-minded composers, and there’s a virtuosity in their writing that is very immediate when you listen to it.

You’ve conducted often in San Francisco. Can you say a little about your work here and your connection with this orchestra?

For me, it’s a love-fest. I always find with the San Francisco Symphony, no matter what repertoire we’ve done, a full satisfaction, a complete artistic experience. They give you 200 percent every time. They have one of the strongest personalities and a solid, solid sound. At the same time, it’s an orchestra that never hesitates to be challenged, to take risks, no matter the repertoire — from Kurtag to lesser-known symphonies by Shostakovich, to Liszt, Mendelssohn, Dallapiccola, Ravel, Stravinsky, De Falla. Their approach remains always the most exciting one. It’s a wonderful, perfect instrument, and that combination for me is fascinating. The human group is fantastic. You can feel when you’re onstage with them that they love being there together. They love playing. I feel very privileged for that relationship. To have two weeks with them is one of the treasures in my musical life.

In general, when you work with an orchestra for the first time, how do you go about building a rapport?

I always find with the San Francisco Symphony, no matter what repertoire we’ve done, a full satisfaction, a complete artistic experience. … To have two weeks with them is one of the treasures in my musical life.

It’s a question of mutual trust, and that happens only through music. I try to be as honest and open-minded as I can, as honest with what I see in the music. I try just to speak the language of music. I cannot hide in anything else — charisma, personality. I haven’t any strategy other than being perfectly prepared and honest, letting the music speak and respecting what the orchestra has to say, what they have to offer. We have to try to find our way together.

After San Francisco, what are some of the assignments you’re looking forward to in the coming months?

I’m very much looking forward to my next Carnegie Hall concert with my orchestra, the Orchestra of St. Luke’s. This season will be my debut with the Philharmonia Orchestra. I am also making my New York Philharmonic debut, my Metropolitan Opera debut. I’m going back to the Staatskapelle in Berlin for a New Year’s Eve concert. And many more.

What are the works you would most like to conduct that you have not yet conducted?

The list is very long. I have not done the “St. Matthew Passion.” I could say any of Wagner’s operas. I will be doing soon Der Fliegende Hollander at the Mariinsky [in Saint Petersburg]. It’s a fascinating opera. I haven’t done yet some of the Mahler symphonies. I’ve conducted some of Handel’s music, but I haven’t yet done a Handel opera. And a lot of Monteverdi, which I haven’t done that often.

I hope you’ll conduct some of those here in San Francisco.

Me too. It’s a place where I would do everything!