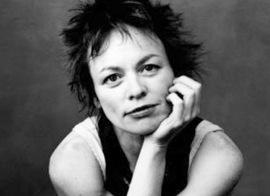 There’s no one quite like Laurie Anderson. Equally adept as a writer, director, vocalist, songwriter, visual artist, and performer, the New York–based artist has published seven books, made numerous films, and created art installations in major museums around the world. Anderson launched her recording career in 1981 with O Superman, followed by the soundtrack to her 1986 concert film, Home of the Brave, and the 2001 CD Live on a String. In 2002, she was appointed the first artist in residence of NASA.

Yet Anderson is perhaps best known for her live performance works, including The End of the Moon, Songs and Stories for Moby Dick, and Homeland. She returns to the Bay Area this week with Delusion, a new production combining music, visuals, and electronic puppetry in a meditation on dreams, loss, myth, and identity. The show, which features Anderson (on vocals and violin) joined by sidemen Colin Stetson and Doug Wieselman, debuted in February at the Vancouver 2010 Olympic Winter Games, and makes its West Coast premiere May 5 at Stanford and May 6-7 at Cal Performances. She spoke to SFCV by phone from London.

You were most recently in the Bay Area with Homeland, which dealt with the aftereffects of September 11. Delusion sounds like a very different landscape.

What was the first idea for the show?

The first idea was a play in which there would be two characters who would look at something from completely opposite points of view. They would both create these very vivid true situations, but completely opposing. I wanted to be able to look at two opposing things without really going crazy. A lot of that is still in there, but it’s become much more lush and visual. In California, we’ll have a new musical combination with two horn players. It’s always fun to change it a little. It changes the focus.

You’ve said that the show is a series of “short mystery plays.” Can you explain that?

I’m not sure if I can without sounding pretentious. It’s really sort of 20 short stories that add to this puzzle — and this is the pretentious part — of how our minds work. For example, it starts with a story of how expectations change your experience. It’s a sort of metaphor with a donkey and a carrot, a mechanism that a lot of people use to go on. It’s how I was using that, and then one day my donkey died. That’s the beginning of it: Where do you go when those kinds of rewards don’t work anymore? What do you want? What do you care about? I suppose I use the word mystery because none of those things are resolved.

What part do dreams play in Delusion?

I go into how dreams play into that, how things that happen in dreams — like mistaken identities — happen in your life, as well. Dreams have been the source of art as long as people have lived, but artists use them in radically different ways. The surrealists kind of illustrated their dreams. I’m certainly using images from them, but I’m trying to figure out how they might work in waking life. I’m 62 years old, and I suddenly realized that if I’ve been sleeping the average amount, which I have, I’ve basically been asleep for, like, 20 years. What have I been doing? How does that affect my waking life? You know how it is when someone starts telling you a dream — “There’s a man walking down the road, it’s my father; no, it’s my uncle” — and you think, “Don’t tell me your dreams!” So telling your dreams in public is dangerous. It’s a kind of high-risk language. But there are ways that they work for everyone, and I’m trying to look at those.

What else is in the show?

There’s a lot of politics in the show. I’ve been doing that in London, because the elections are going on here. I’ve been doing it on the spot, so each night is a little different ... you have no idea what you’re going to do. The idea of trying to be a little looser is very appealing to me. I wouldn’t have dared to do that, even a couple of years ago.

What can you say about the music in this piece?

A lot of it is based on filters that I’ve made for the violin. They process [the sound] in lots of ways, with different harmonics and overtones and things that change it. Some of it’s kind of groove-oriented, some of it’s very dissonant, some of it’s melodic, some of it’s melancholic. It’s doing a lot of different things.

When you start a new piece, what comes first — a word, a sound, or an image?

Well, in this case, since it was a play, I really focused on the words. Then I had an opportunity to work on the visuals at a place called EMPAC [the Experimental Media and Performing Arts Center in New York]. They were really helpful with the projections. In my last three or four shows, I’ve really stayed away from images, because I just get the hives when I see the obligatory visual-wallpaper-with-music shows. I hate that. I find it really distracting and sort of arbitrary, like they just stuck it up there. So I tried to make this different, and that was fun.

You’ve worked in so many different forms. Is there one you haven’t done yet that you still want to do?

I would like to put stories on paper. That’s going to be one of my next projects: to take some of these stories that were made for various media and see if they’re OK in a book. I love books so much — I’m in book heaven here in London; I’m just going from one bookstore to another — so I’m going to see if it’ll work that way. It sounds kind of backwards to go that way, rather than turning printed stuff into media, but it’s one of the things I really want to try.

The essential ingredient in all of your shows is you. Can you envision other artists performing your solo works?

There are lots of artists who are reenacting their things, or having others reenact them. I find that very not to the point, somehow. It just seems like acting to me. It’s like watching a really great dancer trying to do tai chi — they can do all the moves, but they’re not focusing. Tai chi is a moving meditation. You can feel it if someone is doing the moves, but not doing the meditation. So when you see people reenacting performance stuff, it gives me the creeps. But that’s OK. It’s interesting to try different things. I’ve had records, which is a way of documenting something. None of these forms are perfect. There’s something that live art does that can’t be translated. My favorite Steve Martin quote is “Talking about music is like dancing about architecture.” These things just don’t translate sometimes. But that doesn’t bother me. I’m not so concerned about leaving a legacy. That’s the farthest thing from my mind, really.

You said you’re doing things that you couldn’t do a few years ago. Gloria Steinem said that women get more radical with age. Has that been true for you?

In some ways, yes. In some ways I feel more strangely part of the world. Sometimes young artists say they think of me as a role model, and I say, “Please don’t do that!” And then I think, “Get over it — sure, I’ll be your role model.” I have to kind of relax into that. I wouldn’t have done that, either, a few years ago. So in some ways, I’m mellowing out, and in other ways, I’m really trying just to scare myself.

Delusion scares me — the idea of going into territory that’s difficult for people. A lot of people find it a very sad thing. I do, as well, but I like to make the distinction of feeling sad and being sad, because I’m not a sad person. But there is a lot of sadness in it. I’m realizing how much of a taboo that is. Then again, I’m not making a Broadway musical.