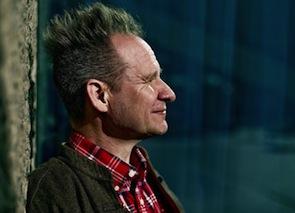 After directing at least nine productions for San Francisco Opera, Cal Performances, and San Francisco Symphony, including several world premieres, Peter Sellars, now 54, remains a controversial figure. As he explains in this interview, provocation is at the heart of his conception of theater.

On August 6, 2011, Sellars and I engaged in a long, unbridled phone chat about his work. After focusing on Desdemona (read article), we turned to his controversial mixture of art and politics.

I want to ask you about your body of work in general. I’ve seen a number of pieces, including Dr. Atomic and the recent Winds of Destiny, which aroused the ire of several prominent critics. How many of your works have an extra-political message?

I have to say, Jason, that nothing is a particularly political message. The whole point is, politics is part of everybody’s life. It’s part of the total mix.

I never want something to be just political. But anything that doesn’t include the political is just not telling the truth. Everything is politically charged, of course. Every part of our lives has political consequences. It’s better to be alert to that than to be asleep at the wheel. So, for me, politics is part of life.

On the other hand, art is not propaganda. It’s not marketing. I’m not convincing anybody to think this or that way. It’s quite the opposite: I’m making a poetic field in which I’m not telling anybody the answer or anything, I’m just insisting that they themselves find their own answer.

Some would say that when the theater program for The Winds of Destiny tells us that we’re spending $121 billion this year on the war in Afghanistan, and then you stand up and preface the performance by repeating that information, that’s propaganda. It’s hitting us over the head and telling us we’re supposed to see and hear something in a certain way. When you follow that by a performance that some (not me) considered unrelenting in tone, they cry foul.

What actually happened is that we discovered, at the first performance, that the audience hadn’t actually read the program. Because the audience was quite mystified, the presenters at Ojai asked me to give the talk beforehand. I was only repeating the information because it was clear that the audience genuinely wanted to know. The amount of money we’re spending in Afghanistan is perfectly relevant, and it’s not tendentious to announce it. It’s just a fact.

Art always is about creating a context. Particularly because we live in America, in the context of no context, is exactly the nightmare of classical music.

With all due respect to the critics who got after you, there was an era when they and a few elderly white men knew everything. That era is long past. Most people in the seats have no idea what they’re looking at, and absolutely need some points of entry. That is just the reality of the present and future of classical music. I’m sorry to offend his absurd royal self, but the fact is that most people have no idea what they’re looking at, and I daresay he didn’t either.

It absolutely does help to have a context. There are 150,000 Ring productions, all of which look at different aspects of the Ring. It’s a little useful to have a sense in advance of which angle are people coming from. There is no one definitive Ring performance — there’s going to be a million of them – and everyone has the particular vantage that they have.

I’m concerned about the future of classical music. These critics have to remember that for an entire generation, music has already been removed from their life in the schools. There is already a generation and a half that literally has no clue what they’re looking at. All you want to do is be as helpful as possible.

All the pieces of yours we’ve talked about take place in theaters at high prices for small audiences, although some have an afterlife with DVD. What other things do you do to reach beyond the proscenium and get out into the community?

The arts do not work through numbers. It’s so important not to think about it the way marketing people think. A social movement doesn’t begin because of widespread numbers; it begins because its moral integrity and its power gets one person talking to another person. It starts people who never saw it talking about it.

In my life, I never worry about what the show looks like that night. What’s exciting is the next morning, someone calls someone they care about. They say, “I just saw this thing last night, and it was the worst thing ever, or it was the best thing ever.” It doesn’t matter which.

Someone they care about listens about something they never saw, and they themselves have to imagine it. That means two people have just become artists. For me, what we do spreads in these magical and profound ways.

That said, yes, I’m doing programs in schools all the time. This year, particularly in Chicago, I did this big program with returning veterans from Afghanistan and Iraq. The Winds of Destiny was a real outgrowth of the times spent in homeless shelters and in veteran’s organizations.

What kind of outreach do you do for young people? Oakland, where I live, may have an incredible murder rate despite a host of violence prevention programs, but the city also is in a statistical dead heat with Long Beach as the most racially diverse city in the United States.

I would add that it’s simply one of the richest cultural cradles in the history of America. One of my obsessions is that Cal Performances increasingly deal with the East Bay as what I’ve been calling a cultural archipelago. There’s a royalty of the arts that lives in the East Bay, and it’s a completely different world. In the next years, I really want to focus on that.

Oakland seems to have the largest population of visual artists in the country.

To me, Oakland is royalty. And not the puffy Queen Victoria/ Queen Elizabeth stuff, but artistic royalty. It speaks of a new generation that is looking elsewhere and recognizing what there is to offer and where interest and integrity and imagination and necessity all transpire to create a movement.

What do you think that we as (a) artists, and (b) lovers of the fine arts, lovers of classical music, and lovers of theater can do right now? Where does our power lie to (a) change course and (b) influence this lost generation, who are not exposed to the arts in school?

Everything has to be built up from the ground again. It’s not going to be a top-down operation. That’s what we learned with the Obama Administration; everything has to start from the ground up. That’s what the arts are about. The solution is at your fingertips, literally. The activism and the community building and sustaining and ability to engage people who are in trouble or who are on the edge is what the arts are about. To create a space where people are not condemned, or where there’s another response besides punishment, that not every response to every crisis has to be a negative one, but that in fact we can respond positively and with healing rather than with rancor and vindictiveness.

What the arts are about is making the alternative present, viable, and totally captivating and alluring and irresistible. And also creating a safe space where disagreement and difficulty does not have to result in violence, but where sophisticated adults are working through difficult things together.

The same tired “solutions” clearly do not work. We have watched failed programs after failed programs. Again, the arts are about being creative with the solutions, not returning to the same old clichés, but actually creative alternatives.

I think this is the best time for artists to exist in the history of the world, because, for one thing, you have, unlike any previous time in history, this exhilarating diversity and exhilarating possibility of rich and amazing conversations that we’ve never had before. At the same time, because everything is so dire, the arts move from a decorative role to what is actually a leadership role. It’s a role that delivers the essential values that the society is missing, at a time when, frankly, the politicians and economists have absolutely no idea of a future and keep canceling a future every single day with every one of their actions.

Peter, we all like to believe that redemption is possible, even for Adolf Hitler. But what do we do when people refuse to be redeemed?

Forgive me for saying it, but every religious tradition is really, really very clear about this. It’s important not to try and play God. You do the best you can do with everyone you meet. But you’re not God, and you’re not in charge of that person. You’re not ultimately responsible for who they are.

You have no idea where that soul is going and what the whole trajectory is. As the Koran says, only God is the knower of hearts. You have no idea what people are carrying with them, what they’re responding to, and what’s really going on. Most people are claiming all kinds of things every day that are not true.

All you can do is create your own zone of compassion and integrity, and positive, deeply healing, cleansing, and inspiring energy. The rest is not your job.

Again, that’s what we stand for in the arts. That’s why, hello, most of the history of theater is not about a happy ending. It’s about tragedy, because tragedy is what actually makes us all humble. Tragedy recognizes that none of us have the answer.

I happen to have a taste for tragedy. I think tragedy is really profoundly healing and cleansing. So I don’t need all these stories to have a happy ending. But I need to work toward the most possible resolution, of course. At the same time, you also have to reach that moment of humility and realize it’s not in your hands.