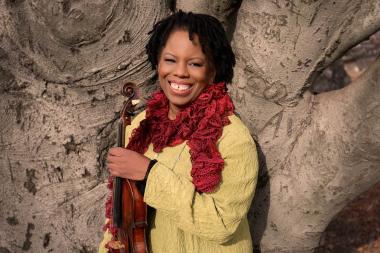 When violinist Regina Carter was just 2 years old, she walked over to the family’s piano and by ear began playing something that one of her brothers had been practicing. When she was 4 years old, her mother enrolled her in a class to learn the Suzuki Method, and she fell in love with the violin.

Now, with a successful career spanning more than three decades, Carter, 58, released her latest recording, Swing States: Harmony in the Battleground, in July. Recorded last December over a three-day period, it is a lighthearted, playful, upbeat, and celebratory salute to patriotism and was created to inspire people to get out to vote. It is clear from the music itself and from the audio clips of band members speaking, that they were having a lot of fun. 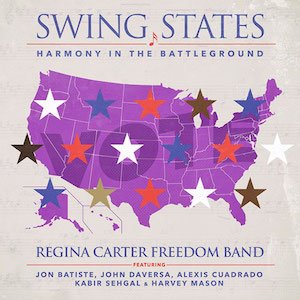 The disc reveals yet another side of this immensely talented and innovative artist. As in her previous 10 albums, in styles ranging from jazz, blues, country, Cajun, R&B, Appalachian, African, and more, Carter uses her artistry to explore and create music that expresses something deeply personal, honest, authentic, and meaningful to her.

She is one of the many esteemed artists to be featured this year at the 63rd Monterey Jazz Festival, on Sept. 25–27. The entire event will be virtual and free, featuring archival performances from prior years. Carter has appeared many times at the festival, and during this year’s presentation of her performance from 2017, which features songs from Simply Ella, her album dedicated to Ella Fitzgerald, she will be available on live chat via the festival’s YouTube channel where it will air, to answer questions and chat with viewers.

Born in Detroit, Carter now makes her home in New Jersey, where she lives with her husband, drummer Alvester Garnett, who is also a member of her band. Her accomplishments and accolades are many, and include several Grammy Award nominations, a National Endowment for the Arts grant, and a Doris Duke Artist Award. She teaches at the Manhattan School of Music, and directs their all-female residency summer program at the New Jersey Performing Arts Center. She is also a hospice volunteer and is deeply committed to helping people make their “transition” peacefully.

I chatted with Carter by phone about her new recording, and how she has been coping with the pandemic.

What inspired you to create and record Swing States?

Around a year-and-a-half ago, I was having a conversation with one of the producers and musicians on the record, Kabir Sehgal. I had planned on doing another project but we were talking about voting and I told him how upset I was at the amount of people that chose not to vote, especially African Americans. For me, growing up, that was not an option. My parents would discuss the candidates at home and I would accompany them when they would go to vote.

I’ve heard people say, ‘I don’t like either candidate,’ and my thing is that voting is about the candidates, but in the end, it’s really about all those people that marched, got hosed, beaten, and killed. It’s because of them that I vote, because they went through that so that I could have this right. So to not vote is a huge disrespect, a slap in the face to them.

John Daversa’s arrangements on the new record are incredible. Did you collaborate with him on any of them?

We talked a lot on the phone and we would send each other recordings. He would ask me, “What do you think about this idea?” or “How would you place this melody?” There was a lot of back and forth. But then he came up with the magic.

Tell me about your life since the pandemic.

The whole thing is so surreal. I wake up and I still forget, like some kind of defense mechanism. I had been so busy and I’m thankful for that, but it was just go-go-go. Recently, I had been on the road without my whole band, so my husband and I would be like two ships crossing in the night. And just before the pandemic, he was supposed to be in China for a month and then the morning he was getting home, I would have been at the airport leaving for my tour, so we wouldn’t have seen each other for six weeks.

So when the pandemic first happened, in a way I was like, “yay, a vacation with my husband,” because I didn’t know how crazy it was going to be.

It must be difficult and frustrating not to be able to do live performances.

Yesterday my husband and I performed a concert for Sing for Hope, and they streamed us to several hospitals in the area. But it’s so odd to just be in your house and playing at this computer screen. It’s just such a weird thing. I miss playing with my guys.

When I can see people it’s a little bit easier, but when it’s just a blank screen, that’s more difficult, because now you don’t feel anything back from the audience — that energy, that sharing, it’s not there — you have to create your own energy.

Tell me your thoughts about the Black Lives Matter movement. Do you feel like America is more on the right track now?

Because we were all locked in for the first time, and people were just glued to their TVs, it was pretty hard not to acknowledge all the murders of Black people. Many people had chosen not to see it because it wasn’t affecting them. But when you turn on the TV and it’s that blatant and in-your-face, if you can still ignore it, then that just sums up who you are and how you think and nothing’s going to change your mind.

I don’t know if America’s on the right track, really. The youngsters have to keep protesting and we all have to do our part to help.

I keep these notebooks of ideas that I collect, and I had two projects in it. One that I still want to do is to find music and research how different cultures celebrate transitioning [to death], because I felt like here in the West, it’s so dark and gloomy, that no one ever wants to talk about it, and it doesn’t have to be that way.

The other idea was the Highway Act, where in the U.S., all these highways were built that were designed to specifically break up black communities and destroy them. Many people don’t know about Black Wall Street and all these other areas that were doing well and thriving, and that a lot of people weren’t paid for their property and ended up in projects or homeless.

Any final musings on life in the corona-verse?

It will be interesting to see how we all navigate this. I just don’t know — I don’t think anyone does, but we are improvisers, so we’re going to figure it out. At this point, the world is living the life of a jazz musician, or a musician, period — just not knowing.

The local favorite tours in support of a new CD inspired by the late Sven Asmussen and other string wizards.