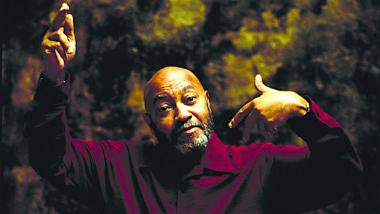 For the final piece of Thursday’s concert, pianist Kenny Barron called all three of his duo partners onto the SFJAZZ Center’s Minor Auditorium stage for a loose but deliberate quartet version of his plaintive near-standard “Phantoms.” He’d been on stage for more than two hours, and he made it clear that there would not be an encore. “We’re not teenagers up here,” said Barron, 75, after a concert that made an incontrovertible case for the incomparable value of time-honed wisdom and decades-long musical relationships.

The Philadelphia-reared pianist, composer, bandleader, educator, and NEA Jazz Master is more than a jazz institution. Since earning national attention as a 19-year-old wunderkind in Dizzy’s Gillespie’s mid-1960s quintet, Barron has been an essential voice in jazz’s progressive mainstream, frequently sought by his peers for his quick ears, beautiful touch, and elegant sense of structure.

Thursday’s first encounter featured trumpeter Eddie Henderson, who joined Barron for a ballad-centric set on flugelhorn. Starting with a measured jaunt through Freddie Hubbard’s “Up Jumped Spring,” the long-time collaborators jousted with debonair wit, as Barron’s inquisitive right hand runs provided a bright foil for Henderson’s astringent melodicism. A master of the fading art of the apt musical quotation, the New York horn player slyly interpolated an ascending line from “Spring Can Really Hang You Up the Most” into one of his concluding passages.

At 78, Henderson is  in the midst of a well-earned run as an esteemed jazz elder, leading his own projects while also touring and recording widely with the all-star combo The Cookers. With Barron he eschewed fireworks, instead delivering a steady flow of lustrous melodies punctuated a couple of times by open-horn buzzes. From a stately interpretation of Billy Strayhorn’s “Isfahan” and Jobim’s “Trieste” to Duke Pearson’s “You Know I Care,” the set was a study in sumptuous melody and graceful pas de deux pirouettes that reached a moody epiphany during an extended take on Barron’s “Rain.”

For sheer invention, novelty and variety, the set with drummer Terri Lyne Carrington was worth the price of admission alone. Opening with Barron’s “Seascape,” a tune that Carrington recorded at 16 with the pianist on her first session as a leader, 1981’s TLC and Friends, she spun a spacious mesh with both ends of her mallets. The duet on Eubie Blake’s “Memories of You” was particularly delightful with Carrington’s swirling brushes performing a soft-shoe routine amidst a melody that comes close to evoking a sense pleasurable longing that Brazilians call saudade. Barron’s “Calypso” turned into the evening’s liveliest piece as a Caribbean journey started and returned to Trinidad after a brief but intense stop in Havana with a forceful montuno.

After Henderson and Carrington, Barron had already delivered a full-length concert marked by variety and drama. Violinist Regina Carter’s set felt like icing on a red velvet cake. Harkening to their acclaimed 2000 duo album Freefall (Verve), they opened with a briskly swinging “Softly As In a Morning Sunrise,” followed by bereft rendition of Billie Holiday’s abjectly masochistic “Don’t Explain.” The jam session warhorse “Squatty Roo,” a riff-based Johnny Hodges piece from 1941, offered an opportunity to cut loose, with Barron weaving in a quote from “Eleanor Rigby” and Carter employing her full palette of accompaniment techniques, playing soft pizzicato fills, strummed lines, and sharply plucked accents.

By the time Barron brought everyone on stage for the last number, the only thing missing was a solo piece by the maestro. Even with this varied and inspired company, Barron was just as enthralling every time his duo partners sat out.