While it’s not uncommon to find musicians, mimes, and an assorted coterie of hip-hop/krumper/B-boy types performing on the streets of most major American cities, it would be highly unusual to stumble upon a dancer practicing the art form of Kathak. Derived from the word “Kathakars” or storytellers, Kathak is a Moghul court dance of North India featuring quicksilver footwork, dazzling pirouettes, exquisitely detailed hand movements, and theatrical facial expressions performed to complex rhythms accented by dozens of ankle bells.

But bringing this dynamic dance to the streets is precisely what Los Angeles-based Rina Mehta is doing with ReSound, a 10-day celebration of Kathak featuring street performances and workshops, including “Bare Feet Beats” and “From Sensuality to Spirituality.” The festival, which began in San Francisco Sept. 17–19, continues in the City of Angels Sept. 22–26 and is taking place throughout the city — from locations as varied as downtown’s Grand Park, Topanga, and Pasadena’s Memorial Park to Santa Monica, Oak Park, and Culver City.

Forty-four-year-old Mehta, who was born in Oklahoma and relocated to India with her parents before the family moved to California when she was 13, initially studied Bharatanatyam — South Indian classical dance — as a child, and began formal training with Padmini Vasan in the San Fernando Valley. When Mehta moved to the Bay Area, where she earned a bachelor’s and master’s degree in immunology and public health from the University of California, Berkeley, but still wanted to dance, she was unable to find a teacher to suit her needs.

Fate then intervened when a friend invited Mehta to observe a Kathak class, an encounter that changed the course of her life. Studying with the master Pandit Chitresh Das, a performer, choreographer, composer, and educator who was instrumental in bringing Kathak to the States, Mehta danced with Chitresh Das Dance Company for 15 years. Having already abandoned her past life as a public health professional and after Das passed away at age 70 in 2015, she and several of his disciples founded the Leela Dance Collective (Leela roughly translates as “divine play”) in 2016.

Never looking back, Mehta’s entrepreneurial spirit meshed with her love of Kathak, and there are now four Leela Dance Collectives currently located in Los Angeles, San Francisco, Denver, and New York. Indeed, the artist, who was the recipient of a Fulbright scholarship in 2012 to empower marginalized young women in India, is also helping propel Kathak into the future as an educator and founder of the Leela Academy, which provides comprehensive schooling in the dance to children, teens, and adults. And perhaps one of Mehta’s most ambitious enterprises is the Leela Endowment, the first of its kind that is aimed at providing a financial infrastructure necessary for dancers to thrive and continue to advance India’s rich artistic heritage.

I had the opportunity to chat with the fiendishly busy dancer/choreographer/teacher by phone about, among other topics, the genesis of ReSound, the Leela Dance Collective and — no surprise — Bollywood.

How did the legendary Chitresh Das inform your work, both as a dancer and choreographer?

He was such a force in so many ways that he completely shaped my perspective and even though I have my own voice and own kind of soul that comes though my work, I would say there are many things I hold dear around the philosophy, approach, and his innovation within tradition. A lot of times we of think tradition as stagnant or stale [but] the reason Kathak is alive today is it’s evolved. One of his philosophies was that it’s important to innovate, but progress and tradition are not mutually exclusive. They don’t stand against one another.

How to make traditional dance relevant to modern audiences and stages and yet preserve what is at the core, that is something I learned and have been influenced by him. There’s a real conscientiousness around walking that line, and one of the biggest things we continue at Leela is to be innovative.

Even the production we’re doing now, bringing Kathak onto the streets — this dance was a high art in the courts — to take that and adapt it for street performances is a very revolutionary idea. All of the work comes in making it appropriate — how to put it together so you can perform it on the street. There’s a lot of innovation that needs to happen. There are movements you have to adjust, shift, add, or subtract while [performing on] a 4 feet by 4 feet board.

What was the genesis of ReSound and what do you want audiences to take away from the performances?

ReSound came out of the pandemic. We were influenced by our experiences of the pandemic, being isolated and cut off, so we thought about how to reengage audiences and come back to the stage. Kathak is a niche art form, a traditional art form that came from immigrant communities, and to be onstage, there are still a lot of obstacles. We wanted to take away barriers and revitalize our communities and our neighborhoods — to perform where we work, play, go out to dinner. Another core influence from my teacher was that he believed the art form exists to bring joy and uplift. If we weren’t bringing joy to audiences, we have failed.

So, how do we come back? We literally just wanted to bring the joy of the dance to audiences, to neighborhoods, and we want to be out on the streets amongst everyday people in everyday life and uplift our own spirits.

Are you dancing and will there be live music, which is always rhythmically mesmerizing?

I’m not dancing, but we have four brilliant dancers, Sonali Toppur, Ahana Mukherjee, Carrie McCune, and Ria Das Gupta. We’re using recorded music because this is our first time experimenting with street performances. We’re hoping to bring live music into it but this is also a learning experience for us.

How did you decide on locations, how long are the performances, and what will dancers be wearing?

We wanted these to be iconic locations or locations that are central to various communities. We did a test run at 3rd Street Promenade and it was amazing. We gathered a crowd and it was wonderful to meet people who came up to us, engaged with us. Third Street has many street performers and we started to meet those artists, too. The performances are all between 20 and 30 minutes, as at a couple of locations we also have our youth company dancing.

It will be full costumes and they are quite stunning. They will attract a lot of attention, because they’re bright, colorful, and will look amazing against the backdrops of cityscapes.

Leela Dance Collective has no male members. Was this deliberate, and if so, is part of that reason because fewer males want to become dancers, as in ballet? After all, your teacher was a male.

We decided it was the vehicle we wanted to forward the legacy of the art form and bring our own artistic voices to the forefront. We were all women and continue to be all women.

Why? Those of us that founded the collective and studied with him, we were devoted to carrying forward the lineage as he carried it forward.

It was circumstantial, but there was a clear dialogue and a conversation around elevating women’s voices in the field. Even historically in the art form, many of the senior master artists are male — and no [Das] didn’t train many male dancers. It’s actually rare for women to rise to the pinnacle as master artists or choreographers. And even though there weren’t many male dancers available, there was an intention for us to create a collective and container that elevated and supported the voices of the female artist.

Brava to that! OK, you knew I would ask, so here it is: Has Bollywood helped or co-opted Indian classical dance and how has Kathak changed since you first began?

That’s the million-dollar question. For us, we definitely think the popularization and the spread of Indian culture has helped in opening the doors for people to be curious about and interested in Indian culture — whether it’s Indian food, yoga, or Bollywood dance. This increased visibility has been a great entry point to Leela Dance. We’re excited about it. Our work is bringing people a little deeper into the dance form and the arts and culture of India.

I like to tell people that Bollywood is pop dance. I don’t know, but has pop music in the West helped classical musicians? It’s a similar thing. Because it’s foreign, it helps people to get interested in India, but beyond that it doesn’t do a whole lot.

Pasadena Civic Ballet has a youth company. We did a master class for them and we did an exchange and it was phenomenal. Because ballet is classical, there were so many similarities — the way they pay respect — no matter what culture you’re talking about. Classical music and dance remain in a category of their own in the discipline they demand, the mastery that’s expected in the realm of classical arts.

We’re excited, but as far as opening up classical dance to people as to what it takes to pursue it, we have a long way to go. There’s distortion and dilution in Indian classical dance that happens and we’re up against that. In some ways technology [social media] has helped, but in some ways, it’s made everybody a master artist. We’re excited, but we still have a lot of work to do.

We’re coming out of a global pandemic, during which time the arts have been decimated in so many ways. What do we expect art to do in this moment and does the artist have a responsibility to do it?

Absolutely. In this moment, our responsibility is to connect with people and to facilitate connections. That’s what artists do anyway. We have been living in fear and anxiety for a year and a half and this is the reason we’re doing ReSound. We want to have our dancers joyfully celebrate and be dancing everywhere. Fear and anxiety have been embedded into our nervous systems and bodies, but as artists, there are things beyond anxiety to feel: love, joy, connection. There is also hope and we’re hoping to do our part.

The 40th edition spans the globe with dance from the frozen North to East Asia. 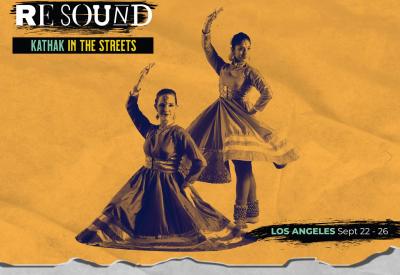 'ReSound' Leela Dance Celebrates Kathak in the Streets of L.A.