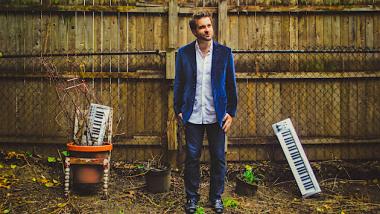 Just on the edge of 35, pianist, composer, and educator Taylor Eigsti has performed, recorded or toured with a stellar roster of A-list musicians at concerts and festivals worldwide. Born and raised in Menlo Park, he began playing piano at age four and was quickly proclaimed a prodigy. At 12, he performed at a fundraiser in California for President Bill Clinton, and at 15, he began teaching at the Stanford Jazz Workshop.  He will be appearing next in the Bay Area at the Stanford Jazz Festival in the Dinkelspiel Auditorium on Saturday, July 20 in duo with Lisa Fischer, the powerhouse vocalist, famous for her thrilling duets with Mick Jagger when she toured with the Rolling Stones, and again on Tuesday, July 30 with his own quintet, featuring a seasoned mix of players that includes Kendrick Scott on drums, Matt Brewer on bass, Jeff Parker on guitar, and Dawn Clement on piano and vocals.

Based in New York City, but traveling and performing constantly with different ensembles, Eigsti is also currently putting the finishing touches on his newest album, Tree Falls, his eighth as a bandleader.  It is his first new record in 10 years and is scheduled for release on GSI Records, in January 2020.

Eigsti is also busy receiving and reviewing hundreds of creative submissions from kids in the Bay Area in response to a call for ideas for a crowd-sourced musical project called Imagine Our Future, that was commissioned by the Community School of Music and Arts, and is part of a larger project from the Hewlett 50 Arts Commission. The resulting multimedia piece will premiere in April 2020.

I caught up recently with Eigsti by telephone from New York City.

Will Tree Falls be a lot different from your previous albums?

It is going to be considerably different, and I am very excited to be diving into and doing my own music again.  With the exception of two songs, it will be all my originals. After waiting 10 years, I figured it should be the things that I love the most.

It is not a straight ahead jazz record — there are orchestral elements, with strings and woodwinds on half the record, and half of it is a lot more sparse, and has vocals. That was an important thing for me, that middle ground between sharing the melody with a voice and the instruments that I wanted to put together.

Why did it take so long to do a record since your last one?

A number of factors made it take this long — having the time, the inspiration, and the energy to do it, and finding a way to release it with a label that would let me make the record that I wanted to make. It takes a while to look at your own music as something important enough that you need to make that the first priority.

This is your first record with GSI.  Why did choose them?

The label and the recording studio are co-owned by the great drummer Eric Harland, who built this amazing studio in Manhattan. Part of their mission is to let the artists create what they want to create, so it’s my first chance to be the only cook in the kitchen. It’s almost a social experiment because it is rare when a label will let the artist actually live out the vision that they have.

What can we expect at the upcoming Stanford show?

For the Stanford show, I put together a group that I think can create a lot of those elements involved in the sound of the new album, and I think it is going to serve as a nice model for me to consider as far as the size of a group to start touring with. I always care more about the Stanford Jazz show than any other. That’s the place that I know and love the most, because this is my 23rd straight year, with 19 years on the faculty, and every year it feels like the home game on the schedule.

Tell me about the duo with Lisa Fischer.

Lisa has a pristine voice, and this whole presence and energy that is captivating. We will be doing a handful of shows together and will have one duo show under our belts before we do the Stanford show. I’ve had to learn a lot of different people’s music when I play with them, but this is probably the first time when I was sitting there, and she was singing, and it was so beautiful, there with tears in my eyes — she is that good. I couldn’t be more excited to be playing with her.

When you were 11, you taught with Smith Dobson at San Jose Jazz Camp. Tell me about that experience.

Smith Dobson was a great jazz pianist and a Bay Area icon. He had me come and be his teaching assistant, and he would leave the room and let me take over the class for 45 minutes while he was watching through the door. He gave me that opportunity to be able to articulate my ideas to other people and I think that helps you understand something about yourself and about your own process that you benefit a lot from.

You have taught many workshops and master classes, including many years at the Stanford Jazz Workshop. What do you like about teaching?

I love and enjoy teaching, and I am fully involved and really passionate about it when I’m doing it. I get a lot out of the amazing interactions and ideas from young people. One of the most rewarding things is that I have seen some of my students go on to be really successful and it’s cool when that happens. You realize that you’ve played a part in inspiring someone.

How did the Imagine Our Future project come about?

Someone approached me to do a project for the Hewlett Foundation and I came up with the idea of crowdsourcing a composition. The idea was that it wasn’t going to be a contest of merit. I wanted people to all respond to the same prompt, which is Imagine Our Future, and whatever that means to them is fine. I am looking at creating an hour of new music out of this. It will hopefully encourage young people to keep coming up with new ideas and creating.

You do some orchestral composing and arranging. What motivates you to do that?

I remember when I was in eighth grade, I wrote a song for the school orchestra. And right when we started playing it, and all those people were playing notes that I gave them to play, still to this day, it was the greatest feeling that I ever had. It’s just really exciting when an orchestra plays your music. I like doing it when I have enough time to balance it with everything else.

Where does the inspiration for your improvisation come from?

I treat improvising with a lot of respect. I’ve always tried to let the way that I improvise be an organic blend between ideas I am attempting to play, and then letting things just happen — we react to it and it very much mirrors life itself. Even if I’m taking a solo, I try to make everything I’m playing a reaction to something — responding to the individual people I’m playing with.

When I am composing, it is very much like the process of improvisation, where I will let a lot of things just happen, some by accident or random input. I’ve tried to adapt my whole style as an improviser and composer to embracing outside input and funneling it into something that has a direction, and hopefully makes sense.

What do you get out of performing?

Where my heart is, is in performing and creating and for me, that always has to come first. The amount of time that I get to sit at the piano and play music for people is the smallest fraction of any other thing that I get to do in my life, and it makes me appreciate those 40 minutes on the instrument after the travel even more. It’s pretty exhilarating when you’re onstage and playing for 17,000 people — it just fills you with this feeling that you can finally share something that will be entertaining. The joy of being able to share it brings that music to life.

Eigsti will also be performing at the Paramount Theater in Oakland with the Oakland Symphony on Friday, October 11, which will include original orchestral arrangements of some of his new songs.

With a crackerjack quartet and a sheaf of exciting new material, the local saxophonist shows why his influence is so pervasive.

In the late '50s, musician and scholar Gunther Schuller attempted to formally integrate jazz and classical music under a concept he dubbed Third Stream. It was a turbulent but persistent confluence, which will be in evidence in an upcoming San José Chamber Orchestra concert.