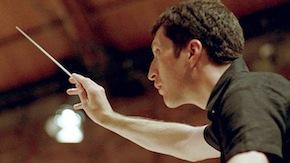 Since his youthful breakthrough works such as the controversial 1995 chamber opera Powder Her Face and the 2000 Grawemeyer Award–winning orchestral masterpiece Asyla (which made the 29-year-old composer the youngest to win music’s richest prize), Thomas Adès has been hailed as the great young hope of first British, then European, and eventually classical music in general. He’s received rapturous reviews from critics on both sides of the Atlantic, won commissions and performances from many of the world’s finest orchestras and opera companies, and even forged a successful career as a concert pianist (he was runner-up in the BBC’s 1990 Young Musician of the Year contest), performing his own music and that of earlier classical and Romantic composers.

Adès’ orchestral music has been performed by the San Francisco Symphony three times (Living Toys in 2006, Chamber Symphony in 2007, and the violin concerto Concentric Paths in 2009), and also at the Cabrillo Festival (America: A Prophecy). In 2006, he played a solo recital under the auspices of San Francisco Performances.

On Sept. 29–30 and Oct. 1, the SFS will perform his Polaris: Voyage for Orchestra, with film projections by the Israeli video artist Tal Rosner. And on Oct. 2, Adès will join one of the most exciting young chamber ensembles, the Calder Quartet from Los Angeles, to perform his Three Mazurkas, Op. 27; Arcadiana; Piano Quintet; and a string quartet named The Four Quarters, plus music by Liszt and Stravinsky, at Cal Performances in Berkeley.Pianist Inon Barnatan will also perform the composer's Darknesse Visible on a recital program for the [email protected] winter series.

So, you’re at least a part-time Californian now. When and how did that happen?

It wasn’t terribly dramatic, as it was in the old days of composers “leaving the Continent.” I’ve been coming here [to Los Angeles] every year since at least 1997 and, without really noticing it happening, I got absorbed by life here. Every time I come back, I just find it very beneficial for work. I’m a Londoner and I live in the center of town there. I love it, but I need the polarity and contrast. I like to work when the world is quiet, and in Los Angeles, in the afternoon, literally everyone else has gone home. Afternoon here is like being up all night, plus sunshine. The “all night” of the rest of the world is the L.A. afternoon.

In practice, I spend more time in Europe than here because that’s practical with my performing and conducting, but I spend at least three or four months here per year, if not more. I’d love it if I could spend more.

When did you first come to the Bay Area?

I actually came to Northern California before here, because my mother [art historian Dawn Adès] was teaching art history — probably pre-Columbian Mexican art — at [UC] Berkeley. That was when I first caught the California bug. I must have been 20 then. We stayed in a house on Euclid Avenue in Berkeley that had a deck at the back with a patch of Bay view. It was total magic for me.

Some of the music I love most has been heard in San Francisco. ... Musically, it must be one of the richest cities in America.

What’s your impression of the California contemporary classical music scene?

Some of the music I love most has been heard in San Francisco. [Conlon] Nancarrow has great support on the West Coast, [John] Cage. ... Lou Harrison, I was listening to before I came to America. Michael Tilson Thomas — having that kind of world-class orchestra, and there are so many imaginative composers and groups around. Musically, it must be one of the richest cities in America. One can be drawn to a place for a whole package of reasons.

As an arriviste here [in Los Angeles], I had a really lucky start. I was picked up from the airport by [renowned new music patron] Betty Freeman. We became good friends until she died a year or two ago. Betty had strong views, and that gave me a certain perspective on the L.A. new-music scene.

Composers from Schoenberg to Stravinsky to Salonen to Adams have remarked how their music changed when they moved to California. How has being in California affected your music?

I’m performing quite a bit in Europe, and then I come here and I’ve got more time free to compose, but I think there’s more to it than that.

To a European arriving here, you get this immediate sense of freedom from certain habits of thinking, when making decisions writing music. You make the decisions with the perspective of a certain kind of personal freedom. In England, you can feel one’s various tutors looking over your shoulder all the time. In L.A. that closeness of older models is no longer in the way, and you can perhaps see a further horizon than you could in England.

I remember the first time I realized that, in 1997, when I was writing Asyla. I had got to the second movement when I arrived. I was working in a little room in the [Los Angeles Music Center’s] Dorothy Chandler Pavilion when suddenly I had the idea that the third movement would be a dance theme. I figured out some way of doing it, and I remember that a little part of me — the English part — was thinking, You can’t do that. Not allowed. I felt a bit bolder in doing something that was more repetitive, or something, and that experience repeated every time I’ve got to work here. It may not be obvious to anybody else, but it’s obvious to me. [Note: That third movement features a startling, disco/house-music dance theme.]

I seem to be using a lot of different kinds of dances — tango, various kind of barcarolles. In the last section of Four Quarters, there’s a dance in 25/16 [time signature] at the end. It’s one of those pieces I wrote here in California. It’s some of the most simple and unencumbered music that’s come out of me. Some of it’s very obsessive.

I get more and more interested in clarity while I’m here. I find I think more clearly here. So if you compare the music I wrote in 1993 to what I’ve written since I’ve been here, there was much more blurring, in a way — frantically throwing things at the page to get to the piece. Out here, I try to build things more clearly.

Tell us about the piece the San Francisco Symphony will be playing, Polaris.

Someone said it begins with an Indonesian, Pacific Rim sound. I wasn’t necessarily looking in that direction, but if somebody hears that, then that’s what they hear. In my mind, it’s just the group of pitches I was playing around with, but perhaps it’s true, a little bit.

When I have a great experience with a piece of music, I get the feeling that it’s happening in my own brain.

[While composing Polaris], I took my first trip to Grand Canyon. That experience definitely gave me the key to how to end the piece. It had to end in a space that was everything at once.

Polaris is the third part of a trilogy of sorts, at least in my own mind, of three pieces for orchestra: Asyla, Tevot, and this one. Each one is a further answer to similar questions. It’s about 10 minutes long. I invented this kind of serialism for it, but it doesn’t make the kind of noise that word implies. It’s a magnetic serialism, and it’s mostly a tonal-sounding piece. It was written for the January 2011 opening of the new hall in Miami, the New World Hall where Michael Tilson Thomas' New World Symphony plays and which has absolute state-of-the-art video capabilities — truly the last word.

The video brings out the strong marine element in the piece. I love having that extra dimension. We [Adès and Tal Rosner] worked on another one, called In Seven Days, that’s more like a multimedia piece. Each section has associated imagery coordinated with it. But Polaris doesn’t have a narrative in the same way. It’s an orchestral piece with video available if anyone wants to use it. I wrote the music I wrote without seeing anything of the images. I think all we did talk about was there being a point in the piece where the magnetic poles reverse, and the music splits and stands on its head. The images at that point go from realistic footage into abstract geometrical patterns.

And then you and the Calder Quartet are playing in the Cal Performances series?

What they do is really special in the nature of musical life here in L.A. When they do sit down and play whatever it is, they really play the socks off it. I love the way they play my music — it seems to come really naturally. This will be the first time anyone apart from Emerson [Quartet] will play my second quartet. The quintet, we’ve played a few times.

Over the years, your music has resisted easy categories like minimalism or neoromanticism, and I like the fact that when I put on a Thomas Adès piece for the first time, I’m never quite sure what I’m going to hear, except perhaps for some kind of musical drama that’s always there. But it sure makes it hard to tell our SFCV readers what they’re in store for!

I avoid those labels and boxes, but eventually you’re going to be put in some kind of box. It’s like my fear of being buried alive. You are who you are — that comes first, rather than any particular style. I think it’s more important to me that when you put it on, it’s live and alive. It goes straight into the listener, absorbs them, in a way. I like that feeling that you’re not sitting on one side of a glass wall and the music is on the other side. When I have a great experience with a piece of music, I get the feeling that it’s happening in my own brain — in me, rather than on the stage. I want to get inside you, so that you feel like it’s going on in your mind. I don’t mean for it to sound creepy! It’s a nice thing. That’s what the best music does to me.