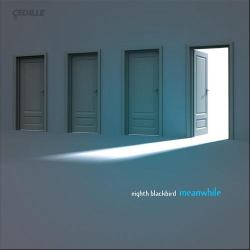 For more than a decade, this Grammy-winning Chicago sextet has been one of new music’s brightest hopes, showcasing music from the 20th and 21st centuries, providing a fertile source of commissions for some of today’s most promising composers, and giving blistering performances almost entirely without using written music. The result is that they seem to connect better with audiences from the stage and even indulge in some choreographed movement while playing sometimes extremely virtuosic music.

If there’s a weakness in 8bb (their nickname), it’s that they can be victims of their own virtuosity. Some of the works on this CD seem to be more about texture and chops than melody and harmony, which is fine as long as those elements remain compelling. Even the program notes several times refer to the contents’ complexity, speed, and difficulty &151; which makes listening to the compositions sound like judging a gymnastics competition. I’m glad these superb musicians possess the extreme skills they do, but for me as a listener what matters is the power and beauty of the music itself, as well as the composers’ and musicians’ emotional connection to it and to their audience, not how hard it is to play.

Fortunately, though the new CD doesn’t entirely escape the potential pitfall of prizing virtuosity over emotional connection, and in some cases the blackbirds’ brilliant playing is better than the music deserves, this meanwhile disc still offers some substantial attractions. The music &151; several pieces written especially for 8bb &151; comes from composers born as early as 1937 (Philip Glass, for once the oldster on a program) and as late as 1980 (Brooklyn-based it-girl Missy Mazzoli), and written when the composers were as young as 19 (leading English composer Thomas Adès’ Catch) and as old as 55 (Stephen Hartke). But all of it bristles with youthful energy.

Mazzoli’s driving 2008 Still Life With Avalanche, whose composition was interrupted by her cousin’s sudden, unexpected death, intriguingly contrasts bubbling minimalist-tinged grooves with plaintive, wistful harmonica drones and strange harmonic colors. If Charles Ives were reincarnated as a 21st-century woman who fronts a sorta-rock band (Victoire), this might be what he’d sound like.

French composer Philippe Hurel’s 1996 work titled …a mesure erupts immediately out of Mazzoli’s avalanche like some modernist atonal, and then veers off into evolving, minimalist-influenced patterns that test the players’ skills and, finally, listeners’ patience. Similarly, Adès’ playful, virtuosic, but ultimately slack 1991 clarinet feature called Catch is more interesting for its surprising colors than for its musical coherence, yet the quartet certainly presages that London/Los Angeles composer’s then-unknowable bright future.

The sense of play also suffuses the disk’s highlight: Los Angeles–based composer Stephen Hartke’s title track, inspired by Asian puppet theater such as Japanese Bunraku and Javanese wayang. Still, take it from someone who’s seen the former and performed in the latter: While you can detect the influences, meanwhile doesn’t really sound anything like either, or like anything else. Having seen and enjoyed the ensemble perform it at the 2009 Ojai Festival, I was especially curious to hear how this one held up, because, as with any great performers, the blackbirds’ onstage charisma magnifies the impact of their music. Fortunately, meanwhile’s colorful concatenation of prepared piano, gong, flexatones, bass clarinet, string harmonics, woodblocks, and more all manages to conjure up the kind of exotic imaginary drama the composer envisioned. It’s a lot of fun.

For me as a listener what matters is the power and beauty of the music itself … not how hard it is to play.

The most arresting work on this intriguing disk, however, turns out to be the oldest &151; Philip Glass’ mesmerizing early work Music in Similar Motion. In eighth blackbird’s deliciously upside-down world, instead of a token recent work filling out a tired program of Brahms and Beethoven, a merely four-decade-old piece becomes the nod to history amid a profusion of contemporary sounds. If only this were the rule instead of the rare yet welcome exception.

Susceptible to any instrumental combination, Glass’ piece works a treat with 8bb’s lineup: pianist Lisa Kaplan, violinist/violist Matt Albert, percussionist Matthew Duvall, cellist Nicholas Photinos, flutist Tim Munro, and clarinetist Michael Maccaferri. I don’t think this makes the later composers’ works any less worthwhile; after all, for his myriad later triumphs, not even Glass himself has quite been able to match the searing intensity and integrity of those protominimalist masterpieces. It’s simply a classic, while the other works will take time to permeate our consciousness, and we’ll know years (or decades) hence whether any of them will be the token OG on whatever medium harbors late-21st-century music.

Hearing Music in Similar Motion in this context underscores just how important Glass and his colleague Steve Reich (another frequent 8bb collaborator) have been to today’s music, as well as to the success of today’s new-music ensembles like eighth blackbird. It’s a treat to hear so many new voices, but when you’re looking down the road, sometimes it’s also useful to cast a glimpse in the rearview mirror, to remember where you came from.