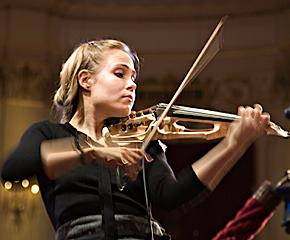 Hearing a work being played by the person it was written for is always an exciting, if relatively rare, event for today’s audiences. But not only is violinist Leila Josefowicz playing the Violin Concerto written for her by Finnish composer Esa-Pekka Salonen when she makes a guest appearance at the San Francisco Symphony on Dec. 8, 9, and 10, but Salonen will conduct the orchestra for the performances. It’s a combination that promises a rewarding evening of music.

For Josefowicz, such performances are highlights in an already busy and honored career that began when she was a child and has included her Carnegie Hall debut in 1994 with Neville Mariner (one of her mentors) and his Academy of St. Martin in the Fields, an Avery Fisher Career Grant, a United States Artists Cummings Fellowship, and a MacArthur Foundation Fellowship. For her, she says, “That’s why it’s great to be in a city I love like San Francisco with a great composer and conductor. Next week is a dream that became true. It’s the biggest sense of purpose an instrument can have.”

The Violin Concerto just won the 2012 University of Louisville Grawemeyer Award for Music Composition. How does that feel?

It’s a thrill. It’s the reason I’m doing what I’m doing. I get so much pleasure giving people something new to listen to.

What is it like to work with the composer when performing a work written specifically for you? Are there extra insights you can gain that help the performance?

It’s another part of the creative process to talk about music with a great composer. We [Salonen and she] talked about what could happen in small moments and in the general overall shape. It was great to be part of his mental process.

It was thrilling that he wanted it for me. I feel so blessed. It’s a beautiful way to collaborate. Some composers don’t want to talk to anyone. E-P was really wanting to hear what I had to say. He was open to ideas I had. I never assume anything. I never assume any comments are taken into account, but it was really fun.

You’re an advocate of new music. What attracts you to those pieces?

I’ve come from a very traditional training as preparation for what I do now. When I was studying at the Curtis Institute, there was no personal connection with the music. There wasn’t spontaneity and it was not collaborative. It was a study that we all need to do, but towards the end of school, I started thinking What am I going to do?

Most of my colleagues were running around playing the same thing, and I was doing that too, but it wasn’t feeling creative enough. I wanted to do more. I wanted to change music. I wanted people to listen to new works. I’ve never looked back.

We’re in an interesting new chapter in new music as a compositional society. We’ve escaped the rules and are not in a rage against the established parameters. We’re free and open. It’s an exciting time, and difficult. You had constraints before. Now, there are no rules for anything. You need an even better command of the process to be clear and coherent.

I’m interested in composition in general. I feel lucky that people have trust in me to perform their works.

You took up violin at a very young age and fell in love with it. What made you love the instrument?

I had very good luck with really great teachers that helped shape what I was doing. I got strong technique with Robert Lipsett. At Curtis, there was a different side. They assumed you had the technical side. And there were tons of hours of practice. And then I chose what I wanted.

From what I read, your parents sound like they were pretty grounded about your career.

They were pretty grounded, but we didn’t know what we were doing. If I were to get my kid [she has an 11-year-old son] heavily entrenched in music, which I haven’t, I’d know so much more than they did. They were very young.

And then, I turned 20, and wondered, Who the hell am I? It’s something all prodigies face.

I worry about all the young people who are pushed so hard by themselves and others. I’m glad about the work I’ve done when I look at the outcome, but I remember I’m one of the lucky ones.

You also said you have no fear of performing. Do you think that’s because you started performing at an early age?

A lot goes into that. It’s great to not think too much. It’s great to think [about the performance], but if you focus too hard, you’re clamping down on yourself and not letting your psyche blossom. It’s a tricky balance. You need to do a lot of work beforehand. It’s hard to feel relaxed if you don’t feel prepared. But if you’re overworked, you feel tired. It’s also a matter of getting your perspective. If you’re hanging on every note, how can you relax? It’s not not-caring, but letting go. This is a concert, it will be over, there will be another one, and it will be over.

If not the violin, what other instrument might you play?

I can’t answer that. I have no idea. I’m interested in composition.

You do yoga. You’re also a mother, so I imagine your free time is pretty limited, but what do you do aside from music?

My son’s 11, so that keeps me pretty busy. There’s not enough time.

There are concepts in yoga that are fascinating to me. One good thing was “don’t judge your practice.” That’s what’s healthy, mentally. Know what you’re trying to do, but don’t judge when you’re practicing. That’s been very helpful.

You’ve won a MacArthur grant. I’ve interviewed a couple of other people who have won them, and they all said it was a complete surprise. The word surreal was used. Does that describe it?

Absolutely. It was really a beautiful experience. It’s related to what I’m trying to do — something I was going to do no matter what — so it was confirmation about what I was doing. If someone had told me I was going to win one, I probably would not have believed it.

It really confirmed that I’m contributing to the world the way I want to. I’m very grateful. It’s a very generous award, but more importantly, it felt good that my efforts were being recognized.

Any plans for while you’re in the Bay Area?

My husband’s family is from Davis, which I really like, but I won’t be visiting. I’ll be jumping right back.

If you weren’t a musician, what do you think you’d be doing?

It’s pretty hard to imagine, but probably something that combines mental and physical work. I can’t say, but something I find meaningful. As I said, it might be composition. I might investigate aspects of yoga. I love being a mom.

Of course, things I need to study. I like the band The Nationals. My husband and I are going to go see them; we’re pretty into them. I played Berg’s chamber concerto for the first time. It was a dense, by which I mean concentrated, piece.

I don’t listen, truthfully, to a lot of music. I get enough sound with my work.