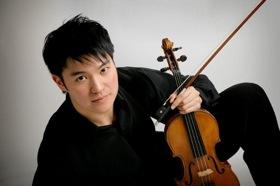 At the age of 21, Ray Chen has charmed critics all over the world, but never quite as emphatically as last week when John von Rhein at the Chicago Tribune named Chen’s CD, Virtuoso, his “CD of the Week.” Born in Taiwan, raised in Australia, and trained at the Curtis Institute in Philadelphia, the young violinist has made a global footprint that’s only getting larger. He won the Queen Elisabeth [of Belgium] and Yehudi Menuhin competitions in 2009 and 2008, respectively. While at the Menuhin competition, he met Maxim Vengerov, who immediately engaged him to perform with the Mariinsky Theatre Orchestra and describes him as “a very pure musician with great qualities such as a beautiful youthful tone, vitality, and lightness. He has all the skills of a truly musical interpreter.” Chen drops into town on Jan. 29 to perform with the San Francisco Symphony for its Chinese New Year concert, in which he will perform Beethoven’s Romance for Violin and Orchestra No. 1 and Sarasate’s Zigeunerweisen. SFCV caught up with Chen by phone recently and discovered that he may already be more Californian than he thinks.

Your CD — how did you put it together? Were you the one who came up with the name Virtuoso, and were you really looking to, as an opening volley, show a wider classical music audience your technical proficiency?

The pieces that appear on the CD were all actually a part of my graduation recital in May. First, we did the Tartini Devil’s Trill and Franck’s Sonata in A Major, then the Bach Chaconne and Wieniawski’s Variations on an Original Theme, so the order’s a little different from the CD. These pieces are all, obviously, my favorites. I don’t believe in recording something because no one’s ever recorded it before. I know that’s an option some people take, especially young musicians. I wasn’t very interested in that because it won’t sound convincing. I have to believe in the stuff that I’m playing.

Moving onto the title, honestly, I have to say that the title wasn’t my first priority. I honestly was like, “Anything will do, as long as it wasn’t anything too outrageous.” I guess some people out there might think, “Oh, what does he mean by that [naming the CD Virtuoso]?” It’s, like, a bit of a shock, or they might get offended, even. You know, that’s perfectly fine with me. I guess a little bit of shock is useful, I suppose. Also, virtuoso has a bit of a bad connotation these days, almost like showman — all fireworks and no depth. I don’t think that’s supposed to be the case. Great virtuosos should be great musicians, as well. No excuses.

Personally, my technique, funnily enough, as I was growing up, was always something I’ve struggled with. For me, it was always the musicality that came first. The technique — that’s when I really had to put a lot of hours in to catch up with people.

When did you decide you were going to become a violinist?

I started when I was 4 years old, and it was always a hobby in those first few years, till I was about 13. That was the turning point. There was a competition in Australia called the National Youth Concerto Competition. I was 13 at the time; I was in the finals, and I won it. The two other kids in the finals were much older: 16 and 17, I think. For me, it was a big encouragement, and I felt that maybe I could really do this as a career. My parents were supportive, but they were also cautious. In the end, it was my decision. That meant sacrificing other things. In Australia, we do a ton of sports: swimming, soccer, and tennis were my sports, and I had to cut that down. I couldn’t really be part of a team with rigorous training.

What is it about this instrument, other than the fact that you started playing it from such a young age and were successful, that made you decide it was OK to sacrifice all these other things?

From the time I started, I always loved performing. There’s instant gratification after you perform for people. Also, it seemed to make people happy. As a young kid, if everyone’s happy, I’m happy too! If I didn’t play violin, I would’ve become a doctor because it seemed like there was also instant gratification in that. If I save somebody’s life, they would be really grateful. That was sort of the fantasy I had in my own mind, but violin turned out to be more fun and enjoyable.

I notice that you have not one but two Strads. Can you tell us the story behind your instruments?

I did have two; now I’m playing exclusively on one. That’s the MacMillan 1721 Strad. I was auditioning for the Young Concert Artists, and the owner of the instrument happened to be there, saw my playing, took a liking to it, and loaned me this great instrument. Then I went to the Queen Elisabeth Competition, and part of the first prize was the loan of a 1708 Huggins Strad. It was great to have two epic instruments. It was not so long ago that I didn’t even have one, so I felt joyful, but I felt guilty at the same time. I loved both of these instruments, but I can’t justify keeping both when I can only play on one at any given time. I gave the Huggins back, even though I recorded the CD with it, because it was on loan from the Nippon Foundation, and I figured they probably have a long waiting list of people who should get a chance to play it.

That is incredibly generous of you. I don’t know many people who would give up a Stradivarius, even if they had multiple.

[Laughs] I wasn’t really giving it back; it wasn’t mine to give away. But the one I’m playing on now is because of the generosity of a donor in New York. (I’m lucky that my donor pays for the insurance. The insurance for these instruments can be around $10 to $15K a year, and that’s just kind of an estimate.)

If we could step back a minute here and think “big picture” for a second. You were born in Taiwan; your family then moved to Australia, and when you were a teenager, you came to the States to study violin. You really are a citizen of the world, so to speak, but I was wondering if you feel like the East is in your blood, and that East-meets-West is something you would like to be a part of your career?

It’s not a choice. It’s always been there. I’m very lucky to have so much multiculturalism in my life, and there’s no need for me to force myself in that direction. As people start to hear of me, East-meets-West will just naturally become more obvious in my music. Yo Yo Ma has always been doing this, and now Lang Lang, too.

Speaking of Lang Lang, there have been a lot of Asian classical music stars in the past. In the last few years, though, there’s been a different feel to it, because now you have artists who really do come off as rock stars, particularly in Asia. They have the right fashion, the right look. Have you at all thought about how you fit into that culture?

My family left Taiwan when I was 6 months old, so I basically grew up in Australia. There’s a distinct connection when I go back. In Asia, they’re really fantastic. The audiences are really young, and that’s always a great sign because here in the States, there are “blue-haired” audiences, so to speak. There’s this constant discussion of “Classical music is dying.” In Asia, we’re actually exploding. I walk out on the stage in Seoul, Korea, and one thing that I never hear anywhere else is screaming girl fans in the audience. It’s just like you’re a rock star.

How I fit into that whole culture? I’m just gonna be me. It doesn’t even really matter for me. I care about the image; hopefully, it’s a good one. But it’s a little bit out of your control, I think. Who you are in public is someone else’s perception. To a certain extent, I’ll do my best to appear gentlemanly and nice, but hopefully with some kick, especially while I’m still young. But I’ll talk to you about it again in a few years.

It’s a mix of classical and nonclassical music. Right now, a few of my favorite classical musicians are Heifetz and Horowitz (I’m very old-school). I have some of Vengerov’s recordings here. And for the nonclassical, I’m actually scrolling through my iPhone right now. I love Defmau5; they do electronic music, kind of like Daft Punk. It’s totally different, and when I’m not playing violin, I like to go into a totally different genre. You can’t get much further from classical violin than this sort of tingly electronic music. I also like Tenacious D. Jack Black is a really great musician, really original. I also like this New Zealand folk group called Flight of the Conchords. They’re kind of the same as Tenacious D, singing funny songs, poking fun at different styles of music out there. I even have, that’s a bit embarrassing ...

For some reason, Katy Perry is in here. Eddie Van Halen is in here. He’s a virtuoso. There’s a whole variety because I think it’s important to be open to everything. But it works both ways; I think classical music needs to put itself out there more.

I completely agree. Many of the new up-and-coming classical music artists also go into schools and volunteer at educational programs. Is that something you would like to do?

Yeah, definitely! Even now, outreach is very important. I do it at my old schools in Brisbane. You get a phone call from a teacher, and hear, “Oh my God, we have to order 40 violins for these fourth graders because everyone wanted to start playing violin after you left.” That’s really cool. I’m sure 99 percent will quit after a month, but it was still cool to be this inspiration, and that’s what we need more of.

Could you tell us more about the Chinese New Year concert?

This is something I’m really looking forward to. I’ve only been to San Francisco once. That was about three or four years ago, and I just played a private concert. Curtis [Institute of Music] has some donors there, and we were sent over. It’s really cool that I’m playing with the San Francisco Symphony — it’s one of the best orchestras in the world.

Did you decide on the piece you were going to play?

I did. There’s something very Asian about Beethoven’s first Romance. I think it’s because it’s very similar to the erhu in the beginning — the kind of gypsy playing that has lots of expression in the slide and the long lines, which is then followed by the fast section. The other piece like that is the Butterfly Lovers Concerto.