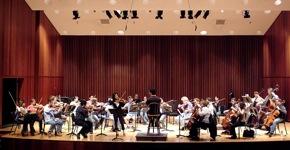 When I watched Wall Street: Money Never Sleeps, I waited to hear an iconic line to match the first film’s “Greed is good.” Gordon Gekko got teary, and I lost hope — until Bretton James (played by Josh Brolin) delivered the aphorism “Every man should have a mentor and a protégé.” Ironically, it is the completely well-intentioned San Francisco Academy Orchestra (SFAO) that acts on this fortune-cookie advice in the Bay Area. On Oct. 10, it will open its season with Mozart’s Adagio and Fugue, Elgar’s Introduction and Allegro, and Astor Piazzolla’s Four Seasons in Buenos Aires.

The SFAO began its first life as the San Francisco Student Philharmonic in 2000. Current SFAO Music Director Andrei Gorbatenko relates, “I used to play in the San Francisco Youth Symphony. A lot of the musicians would get together after rehearsal in the Symphony Hall and read through our repertoire. San Francisco Symphony members would come and coach for free. They were just around, and liked working with young people. The group got so big that they needed a conductor, and I said, ‘Me, pick me!’”

On occasion, however, Gorbatenko will hand the baton to a guest conductor so that he can observe the players’ mentor/protégé chemistry from the audience’s perspective. “These young musicians are so pleased to have the opportunity, and so inspired to be sitting next to these SFS members [who include Dan Carlson, associate principal second violin at the Symphony, and Amos Yang, assistant principal cello], that they’re glowing. The look on the SFS members’ faces — maybe it’s that moment of nostalgia for their first concerts; they’re glowing, too.”

In January 2006, the SFAO earned its present name when Gorbatenko realized, as he states, “A lot of new members were already young professional musicians, and they just saw the value of working alongside members of the SFS who helped prepare them for auditions for regional symphony orchestras. The name ‘San Francisco Student Philharmonic’ was no longer appropriate, since many members were about to join the big leagues, like the SFS and the New York Philharmonic.”

Various training programs exist in the U.S. for young professional musicians. Michael Tilson Thomas’ New World Symphony and the Civic Orchestra of Chicago, which is affiliated with the Chicago Symphony Orchestra, are prominent examples, but neither “includes current additions from major metropolitan symphony orchestras, the way the Academy Orchestra does.” The Aspen Music Festival, where Gorbatenko played with Eugene Levinson, principal bass of the New York Philharmonic, “gives the opportunity to some students to sit next to professional musicians from around the world, but that only happens for about one month over the summer. The SFAO gives musicians the opportunity to do something all year round.”

The orchestra has grown, mostly on the strength of its music, word of mouth, and a grassroots model of small donations on a large scale. Not surprisingly, though, its brand also emphasizes youth and newness. “Auditions are held annually at Davies Symphony Hall. Most musicians are in their 20s. We don’t let anyone audition who’s older than 30,” says Gorbatenko. His favorite works to feature are those seldom performed. “Piazzolla’s Seasons is inspired, a bit, by Vivaldi’s. Unlike the Vivaldi, which is more of a pastoral setting, the Four Seasons in Buenos Aires is more of an urban setting. It has a bit of trendiness to it.

“Young people really like our concerts, and we’re an orchestra of young people,” he concludes. “Frankly, after the concerts we go down to the pub and have a nice time, and the audience comes, too.” The tap stays open after the performance? I’m in.