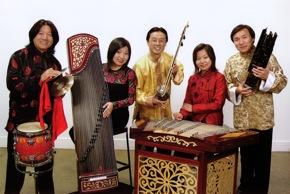 Shanghai as the Paris of the East is the irreplaceable myth of contemporary China. For Western movies and fashion, Shanghai in the 1920s and ’30s still defines Chinese glamour. The opium dens, shady nightclubs, and all-inclusive absorption of foreign cultures are all the more alluring because their exoticism represents a lacquered newness to familiar pleasures. It was with this promising background that Melody of China and Asian Improv Arts teamed up at Old First Church on Friday for “Shanghai Stories,” a concert of jazz and Chinese classical and folk music.

It would not bode well for a culture to buy into a myth of its own creation. Composed of nine musicians, all trained at prestigious music conservatories in China, Melody of China has fortunately only sought to present music of its native land in its most honest and unadorned form. Although it has commissioned and premiered 40 new works by some 20 contemporary Chinese composers since its founding in 1993 and has performed with everyone from the Berlin Philharmonic and the Del Sol String Quartet to electronic music composer Carl Stone, this San Francisco–based group steadfastly maintains the sound and substance of its large Chinese classical and folk repertoire.

If there is one character most important in the Chinese language, it is that for harmony. Unless a piece is specifically written for solo performances, as was the case in Flying China, a showpiece for each musician to display their virtuosity in turn, Chinese classical and folk music strongly resist convergence toward a star instrument. The ubiquitous guzheng (the table harp) and yangqin (a hammered dulcimer as difficult to control as the über-sensitive touch screen of an early iPad prototype) were in lively conversation with the sheng (bamboo flute), the pipa (lute), and the gaohu (two-string fiddle).

There were no set roles for the call-and-response, no deviation from the harmonics created by layers of percolating notes. Lest the audience walk away thinking Chinese music is all tranquility in nature and merely lively celebration with a graceful touch, the suona (double reed) closed the concert’s first half with Hundred Birds Playing Homage to the Phoenix, a possible soundtrack for the next extreme-animals show to be filmed in an aviary.

Headed by the dynamic Francis Wong (who asked for no fewer than four rounds of applause for the performers; must not be a Democrat), Asian Improv Arts focuses more on conducting outreach and giving artistic voice to the Asian-American experience than on promoting a genre of music. On Friday, Wong premiered his own composition Shanghai Story, scored for Melody of China, plus saxophone, trombone, drums, and bass. Wong’s trademark is the fusion of jazz and Chinese folk music, but this piece is his first that uses the latter as its foundation.

No matter which genre led, it was not an easy partnership: Shanghai Story is about George Wong (Francis’ father), from his childhood in Shanghai to his return after a few decades in America. Opening with a folk song from George’s ancestral home of Wuxi set to funk rhythms, the jazz and Chinese instruments playing in tandem caused some major cognitive dissonance. The second movement was a sinicization of God Save the King, which was unsettling less for its use of Chinese and jazz instruments than for its insinuation of the British Empire’s power. The final movement delivered on the fusion ideal — it paired the heavy gait of blues rhythm with dramatic and subdued melodic phrases from Beijing opera to tell the story of a man who went back home only to find home no longer existed. Without the spiritual listlessness of jazz or the folk patina of the Chinese instruments, the enterprise would have fallen short.

So why do we favor ’20s and ’30s Shanghai, even though there are much newer, chic incarnations of East-meets-West? Perhaps because those who still hold on to the myth understand that the way we live now is never the most desirable place to be. Another hand for Melody of China.