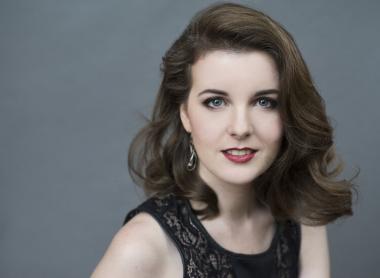 A role debut, a big premiere, or even an audition can feel critical to a singer in the early stages of an ascending career. But 2020 has a way of shifting priorities. Such was the case for Simone McIntosh, a second-year Adler Fellow. A native of Vancouver, B.C., McIntosh is a graduate of the Canadian Opera Company’s Ensemble Studio where she won the studio competition in 2016.

Just as hospitals were overrun with COVID-19 cases, the McIntosh family had quite a scare as McIntosh’s sister had to be hospitalized for a week with a serious, non-COVID illness. The hospital restrictions prevented any visitation, so McIntosh stayed put in S.F., but she would travel soon enough after the Canadian consulate contacted her to say that Canadian airlines were no longer providing service to and from the States. As a Canadian abroad she was given three days to weigh the risks of travel, ultimately deciding that the need to be with family was paramount.

At the same time, the San Francisco Opera, like all other arts organizations, shifted from an artistic and marketing focus to concerns about the safety of their artists and audiences. McIntosh’s March 4 Schwabacher debut recital, which featured Olivier Messiaen’s rarely performed Harawi, was allowed to go ahead, although the April Schwabacher Debut Recitals, something of a feather in the cap for Adler Fellows, along with the June season, were canceled.

Her sister is now doing well and McIntosh is safely sheltering in place in a picturesque lakeside town in Ontario, where she spoke to SFCV via Zoom.

Tell me about your current schedule and what efforts the San Francisco Opera is making to keep the singers on track.

At the very beginning we weren’t really expecting everything to be going as well as it is. Obviously it’s not ideal. We would much rather be coaching in person and rehearsing face to face. But pretty much everything is available online. We’re coaching with our coaches, we’re having singing lessons, we’re taking German lessons, and Italian. We had acting lessons, body and movement lessons, and now that we’re getting into the period of time when we would have had rehearsals for the mainstage people are reaching out and speaking to the Adlers. For example, Pat Racette, Quinn Kelsey, and Christian Van Horn, all the people who are taking care of us and giving us advice. There’s a lot of comfort in these unbelievable stars coming to talk to us. The amount of support we’re getting from the company, and from the singers connected to the company is just incredible.

You are with family now?

I’m with my partner right now, but my father is very close by. That is the nature of being Canadian, with the visiting and the visas you are always conscious of how long you can be in America, but being back here has put a lot of grounding in our relationship which is really nice. Also, with my family, they were worried about if and when I would be able to come back so it puts their minds at ease.

One of the videos SFO has put out recently that features you is a funny collection of Adler Fellows putting on heavy makeup and gowns while they stay at home and it ends with the tagline: “Stay fabulous divas.” What are you doing to “stay fabulous, diva”?

I am singing every day. Usually I like to take one day off a week, so I am observing that, but I am still practicing and working towards goals: when it comes to role studying and things we are “preparing” for the fall. Just having goals in mind has been a huge benefit for the upkeep of my voice. There is no part of me that wants to lose any technical abilities during this time. It’s a wonderful opportunity to focus on the voice, to put more attention on working things out vocally and technically. As unfortunate as it is that we can’t work in person, we’re moving in a direction that I’m really happy with as far as my personal development as a singer, and it really helps that we’re getting so much attention as Adlers.

What roles are you preparing for the fall?

I’m covering Dorabella, [in Così fan tutte] and I’m doing a quick cameo in Rigoletto, [the Page] and I have a few assignments in Handmaid’s Tale, so those will be the most challenging. I’ve covered Dorabella before so right now I feel very comfortable with it but I’m happy to get it to the next level.

I’m glad it’s feeling like a rich time. I guess you do have plenty of time to practice.

Yes. I have time for role studies. Rosina [in Il Barbiere di Sivigilia], for example, I knew the aria, the trio, the duet, the second aria, but I never knew the role, and that is something I will be doing so right now is a perfect opportunity.

Who is your voice teacher?

While in University I studied with Dominique Labelle [at McGill University in Montreal] and I continue to go back to her, but as an Adler Fellow we also have César Ulloa and Susanne Mentzer.

I think there is something so endearing about some of your characters, and the repertoire that Mentzer and Frederica von Stade were so known for. Audiences just love them like family members: Cherubino, Cenerentola. How does it feel to sing some of the most charming repertoire in opera?

I definitely think lyric mezzos are lucky. Not only in opera but in art song. There’s very little we can’t do. In terms of the roles, the characters are so relatable, so human. Last year I did a Cenerentola and it was my first time doing that role, and getting to know that character it was almost as if she were my best friend. There’s something about Cenerentola that is like that angel on your shoulder who is just there to be protective and supportive. Doing that kind of role is quite rewarding, and then there’s Cherubino [Marriage of Figaro] who is kind of the opposite of that; he is like a chaotic neutral. He is so uninhibited. I love playing pants roles.

I’m not sure I get what you mean by “chaotic neutral” [a term from Dungeons and Dragons roleplaying]. I get that Cherubino is chaotic, but how is he neutral?

If you were to look at characters as if they were chaotic-good or chaotic-evil, lawful-good or lawful-evil, Cherubino lies in the chaotic-neutral. He doesn’t have any deeply good or deeply evil intentions, it’s just all about puberty. When I’m singing, I don’t want to be an acting singer, I want to be a singing actor. To me, the music is a supplement to the acting, at least that’s what I hope is coming across.

I was curious about the technology used for the “Odes to Joy” [Videos put out by San Francisco Opera during the shelter-in-place] because you seem to have avoided any delay via Zoom and synced up perfectly.

The Odes to Joy are recorded separately. The pianist records a background track and one of the singers records a background track, so with the Lakmé duet I asked Anne Marie [MacIntosh] to record her part first, so I put it together in my software. In the coachings we can’t really work on rhythm, but there are other aspects we can work on. The opera invested in some mics to give us for this time, which is really thoughtful, and allows us to be consistent.

The recent production of Rusalka meant a lot to audiences here as it was outstanding on so many levels. Can you talk about the process of rehearsing that, both what it was like to work with Music Director Eun Sun Kim, and how the staging rehearsals achieved that harmony with the music?

From a biased opinion, it was the best thing I’ve been a part of. Unbelievable cast. Unbelievable imagery. The woodland scene was really fun to stage. We got to be with all the dancers and it was a really positive and energetic opening. It really set the stage for what you were about to experience with the show. We got into the first rehearsal and my colleagues Ashley [Dixon] and Natalie [Image] and I did the staging twice and I can’t tell you how out of breath I was by the end of that. We were asked to be almost Broadway singers. We’re dancing, we’re jumping around, being so physical, I had to climb up a ladder, I think Ashley did as well. Every time we did the scene we were just panting.

It takes a lot to learn how to be that active and sing at the same time, but by the end of it I was ready. I definitely got quite fit during that time. The way that everyone worked in that cast, it was such a wonderful, kind, supportive cast. Everyone was so nice and a huge component of that was Eun Sun Kim: Beyond her musical abilities, she is one of the most generous conductors I’ve ever worked with. She has this way of working with people that is so humble and beyond herself. It’s all about the music and the integrity of the music.

You have mentioned the Artist Relief Tree, an organization to fundraise for singers and artists to help them get through this time. Is there anything you’d like to say about that, or the current financial situation?

I’m really fortunate to be a part of San Francisco Opera. They have been so loyal to their people and I’m truly grateful to be a part of that. And other companies are stepping up, but my colleagues are losing work left, right, and center. Like, entire yearly incomes. It’s so painful to hear that my friends might not be able to make rent because their gigs are canceled. So the Artists Relief Tree is allowing artists to help them have just a little bit of help, and any little bit makes such a huge difference.

I’m hoping that people who can afford to contribute, do. Another organization that has been doing a lot is the Merola Emergency Relief Fund, so people who were Merola participants in the past five years can apply for this grant and my friends have been saying that it pretty much saved their lives. It’s really quite huge. Initiatives like that are what are making our community able to eat and have shelter. And companies are also struggling. Many of them may not come back and that is devastating, but a huge way to help them is to buy subscriptions for next year. There are a lot of things one can do, though it is such a tough time for everyone. But I am not only hoping, I am confident that opera will come back in a big way

Ashley Dixon and Christian Pursell stand out on a stage bursting with talent.

Merola Opera Program Has High Hopes for Its 63rd Season

The selected artists are rising stars with origins around the globe.

Amina Edris Comes Into Her Own With Cleopatra