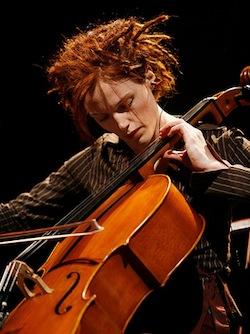 Zoë Keating’s website calls her a “one-woman orchestra.” Yet in her performances with the ODC Dance Company, in Brenda Way’s Breathing Underwater, she’ll be playing three of her pieces with the multiple musicians of the Magik*Magik Orchestra. Way takes three of Keating’s pieces and weaves them into a portrayal of women’s experience in the world.

SFCV talked to Keating the day she and her husband and toddler (all battling the flu) were flying off for a weeklong tour. She was trying to wrap up some work on a commission for the Low-End String Quartet and for her own album, which she hopes to finish by the end of the year.

You write so much music, and perform a great deal. Is it a challenge to do all this with your little boy so close at hand?

Of course, he’s well taken care of while I’m working, but my studio is in the house. It’s just a spare bedroom, and it’s not soundproofed, so I can hear him over my headphones, calling “Mama, Mama, Mama!” I try to ignore it, but you have to be a stone not to pay attention. It was lots easier when he was younger, because he couldn’t say my name yet.

Well, I’m so impressed by how much you have accomplished in recent years, and how you make it all work. You’re also gearing up for your upcoming performance with ODC Dance at Yerba Buena Center?

I’m really excited to be doing this. I’ve been working quite a bit with dance companies over the last few years, and none of them in San Francisco. I did my first performance with a dance company in Spain in 2008. It was really amazing to watch the performers express my music in dance. The only thing better would be to do this in San Francisco. I’ve always wanted to play Yerba Buena. So it’s super-exciting for me to have my San Francisco dance debut there.

The performance will feature three of your pieces, put together in one dance. Did you intend for them to be performed together?

No, not at all. I would never have thought of playing them together, and I think they go really well together! It’s one of the things I love about being a performer. I love it when people hear something in my music that I didn’t hear, and when they have some vision of what it is that is not my vision. That’s fantastic, because it’s like these pieces go on to have multiple lives.

Is there a unifying theme among the pieces, something that binds them together?

These are pieces I wrote at totally different times. One piece is called The Last Bird. I wrote it for the most tragic scene in the documentary Ghost Bird, about the extinction of the ivory-billed woodpecker. It was this really tragic moment when you realize probably all the birds are gone.

One of the pieces, Zinc, has never been performed live before. That one’s a really happy, bubbly piece that I always imagined as a cascade of water. I live in the forest, and I always imagine this piece as right after the rain when you go out and the sky is clear and it’s all blue outside and all the creeks around here are rushing, bubbling down the hill. It was commissioned for something else, and it’s the only piece I’ve ever written that doesn’t have all-cello in it. It’s got violin, marimba, and piano. I’ve hired the Magik*Magik orchestra and we’re going to play it together.

After I write the pieces, they take on all these different meanings, both for me and for listeners. I love that.

The third piece is a very somber piece that’s called Legions (War). I started writing this back around the millennium and didn’t finish in until 2005, when it was the 60th anniversary of the Trinity nuclear test. There was a simulated nuclear explosion during an event called Simnuke in the desert on the anniversary, and I played my cello right after the explosion, right there in the desert. It was pretty intense. I think the music helped bring home the gravity of the moment.

Did choreographer Brenda Way know what the music was written for when she selected the pieces?

She has no idea about their origins, because I never told her! The thing is that after I write the pieces, they take on all these different meanings, both for me and for listeners. I love that.

So you won’t be thinking “dead woodpeckers” during the performance?

Absolutely not. The thing with writing music is you have some sort of an inspiration that makes you write a piece. But when you succeed writing music, it transcends things, so it can mean lots of different things at different times. If you think about the music you like to listen to, it probably doesn’t have just one meaning to you.

People use my music in their projects a lot, and I get a kick out of the variety of uses. I have this one piece called Optimist that has been used in a lot of things now, and they’re all totally different, and each one of them works.

I’m also really lucky because the kind of people who tend to be interested in my music, I usually like what they’re doing.

Are you going to be on stage with the dancers at Yerba Buena?

We don’t know yet. It’s about the sonic limitations of the space. For the pieces I play solo, I sample the cellos I play, and if there’s any speakers on stage they may be feeding back. We’d like it if I could be on stage with them but they might have to put me in the pit. We won’t know until we can work in the space.

You are someone who should be both heard and seen. You’re not just someone who plays an instrument. You are a real performer, and have been for a long time. How do you see yourself?

Is this something more classically trained musicians are doing lately — putting an emphasis on who they are — and not just the fact that this piece is coming out of this instrument?

We’re in this performer culture. [Audiences] want to know more about the person who’s making this art. Your image is part of that. Social media has brought it to a fever pitch. The classical music world is going that way, too, now.

I think of myself as a creator. I create music and ambiance and I do it with a cello.

For a long time, people would go see a concert and we’d choose what we’d see based on what they were playing. I have some old posters that say the piece, like “Bach” or “Mozart,” and then in small print the ensemble performing it. It used to be that the composer was the draw. Now the performer is the draw.

Your gorgeous signature red dreadlocks are certainly part of the Zoe Keating experience.

Well, actually I’ve just decided to go grow out my natural color. I’ve had gray hair since I was 20. It’s typical Irish: early-onset gray or white. I’ve been dyeing it back to my natural red for a long time but I’m in transition. I think it’ll be easier. Right now I have it as gray and white on the sides, and red on top (the dreds).

Is this a little hard, in this culture where so many people are striving for the most youthful looks possible?

Letting your hair go gray is interesting. I’m glad I’ve never been popular for my looks.

You don’t think so?!

Well, maybe I’m a thinking-man’s musician. So some of the pressure is off. But I am a little apprehensive about changing my hair because I’ve had the same hair for my whole career. Plus my hair has always been cello colored. I like that. We’ll see how it goes.

Do you have any items on your wish list we should know about?

I’d love to actually write music for dance. Always, in the past, people have choreographed music I already wrote. I’m looking forward to working with groups and getting to know more about what they need so I can work with them in the process. It’s pretty amazing, if you look online: Pretty much half the videos on YouTube with my music on them are dance companies.

I’ve done it by accident all along. Now, I’d like to know I’m writing it for dance and see where that takes me.