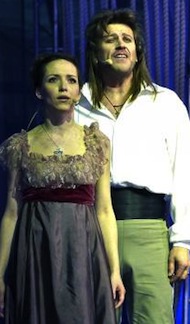 When you think of monumental stories of great lovers, which ones come to mind?

Romeo and Juliet, of course. And maybe Antony and Cleopatra, Lancelot and Guinevere, Tristan and Isolde, Achilles and Patroclus, and Pyramus and Thisbe, to name a few.

I propose another pair: Nikolai and Conchita. Never heard of them? You’re in good company.

Most people in the U.S. don’t know about the fascinating, real-life love story of the Russian nobleman/explorer Count Nikolai Rezanov and Conchita Arguello, the daughter of the commandant of San Francisco. But in Russia, Juno and Avos, the rock-opera version of their love, has been packing theaters since 1981.

And now, this Russian sensation is coming to San Francisco and Santa Rosa — but for only one night in each venue. The Bay Area engagement is rather like the relationship of Nikolai and Conchita: fleeting, but utterly intriguing, well worth seeking out, and quite unforgettable.

[Editors note: These performances have been canceled.]

“You go home with the music in your head,” Pierre Cardin, a major fan of the show once said. “This is not musical comedy, it’s opera. But not boring opera. If you don’t speak Russian, it doesn’t matter. The music is so strong.”

The opera’s title, Juno and Avos, comes from the ships that carried Nikolai and his sailors first to Japan and then to Alaska in 1805. After a devastating winter in Sitka, the men set sail for San Francisco, seeking help and provisions.

They reached the Presidio, and Nikolai met with Commandant Don José Darío Arguello. As it happened, he arrived just in time for a ball, where he met Arguello’s daughter, Maria Concepción (Conchita) Arguello. They fell madly in love.

Never mind that she was betrothed to another, or that she was 15 and Nikolai was 41 — merely a year or two younger than her father. They were smitten. Shortly after they met, Nikolai got on a ship and set sail back to Russia to seek permission from the tsar to marry Conchita, since she was Catholic and he was Russian Orthodox.

Unfortunately, during the arduous land journey from Siberia, he fell ill with pneumonia. Then he tumbled off his horse. The combination proved fatal.

Meanwhile, back in California, Conchita heard that her lover had died, and that his last words were of her. Yet she refused to believe the tragic news of his death. And so began a long period of waiting. Legend has it that Conchita turned down numerous suitors while waiting for her true love to return.

It took some 35 years for her to receive the confirmation she needed to realize that her beloved Nikolai had indeed perished. Think of it: 35 years of waiting chastely for the love of your life. Could you do that? It’s a question many teary-eyed audience members ask themselves when leaving the theater.

There is no Love in the Time of Cholera ending, with a soul-satisfying reunion of two long-lost lovers decades after their first encounter. No, when the woman who had all this pent-up passion and burning love for this man realized it was for naught, she went on to become a nun in Monterey.

“Sister Dominica” is buried at St. Dominic’s Cemetery, in Benicia. You can visit her grave if you’d like to pay homage. And if you want to see the tomb of her lover, you can make the trip to Krasnoyarsk, Siberia. You wouldn’t be the first, as Nikolai’s final resting place is visited by many hoping to dip their spirits in the immortality of true love. An inscription on one side of his memorial reads: “Nikolai Petrovich Rezanov 1764–1807. I will never forget you.” The other side: “Maria Concepcion de Arguello 1791–1857. I will see you nevermore.”

You wonder how their story has (so far) escaped the radar of Big Hollywood.

Punching Them in the Face With Art 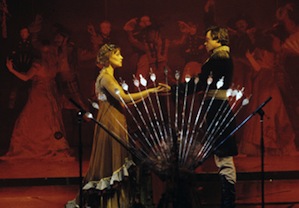 You may also wonder how this story ever came to be produced in the first place. Its inception came during some of the bleakest years of the Soviet Union. On top of all the economic and social woes, rock music was very controversial, as was any mention of religion.

“The two at once? There were real risks,” says Anne Chermak Dillen, who, together with her husband, Mark Dillen, is helping to bring Juno and Avos to the Bay Area in these benefit performances for the Fort Ross Conservancy. The nonprofit supports Fort Ross State Historic Park, a coastal site 80 miles north of San Francisco that was settled by Russian traders in 1812.

Composer Alexey Rybnikov had had enough. He recounts in a documentary on Juno and Avos:

We lived in a spiritual prison. It was unbearable for creative people, just unbearable. We either had to submit to that totalitarian power — and it wasn’t so much the ideas of Communism, it was all those filthy people who were exploiting the ideas to promote their own careers and prosperity. It was really disgusting. I felt like punching the table, screaming, spitting in their faces, punching them in the face, but you could only punch them in the face through art. Art was the only way to do it.

Yet, even then, you had to be careful. The rock opera was put forth as a “contemporary” opera. Much censoring ensued. The Virgin Mary was listed, mildly, in the program as “woman with a baby.” But the haunting Russian Orthodox–style music that permeates parts of the work somehow slipped past the censors. Rybnikov, together with Andrei Voznesensky, the revered poet and writer who penned the libretto, and director Mark Zakharov, managed to get the show onto the stage of Moscow’s Lenkom Theatre.

It proved to be a smash. In the midst of all the Soviet gray (metaphoric and otherwise) burst this colorful work that challenged all conventions, albeit in a less radical way than others that had been banned outright. Tickets became hot commodities.

Nikolai’s final resting place is visited by many hoping to dip their spirits in the immortality of true love.

Chermak Dillen and her husband were career diplomats working at the U.S. Embassy in Moscow during the premiere performances of Juno and Avos. The two still have their ticket stubs, complete with official Soviet ink stamps on the back. They got to know Rybnikov, saw the show again 20 years later, and were equally enthralled. When looking for ways to help the Fort Ross Conservancy, the first thing that came to mind was this show, which indelibly linked Russia with San Francisco.

Because of all the controversy surrounding the production, the company could perform the show only once or twice per month. In typical Soviet fashion, rules conveniently popped up that banned them from performing the majority of the time, including 10 days before or 10 days after the big holidays.

Still, the rock opera resonated deeply with the public. Some speculated that, besides the fascinating story line, the intoxicating and memorable music, and a show closer to the style of Broadway and London’s West End than the usual Soviet fare, something much deeper was going on. Something spiritual — dare they even say “religious”?

Zakharov recounted that “about two months after the premiere, the German magazine Stern noted on its first page that in the USSR, religion had been destroyed, and the only place where young people could experience religion was in the theater of Lenin’s Komsomol.”

In addition, the work provided a look at America that few in the Soviet Union had seen: Russians seeking out America, getting help from Americans and being friendly with them. On another level, Conchita and Nikolai could be stand-ins for America and Russia. The idea of love between them may have struck a chord on a national level.

The New York Times recently wrote about the show that “The Lenkom Theater was embarked on a kind of summer of love Soviet-style, packing in rapt audiences who were ready to think about America in quite a different light.”

You would think, then, that when the Iron Curtain came tumbling down a decade after the premiere of Juno and Avos, there would be less of a need for the curtain to rise on this rock opera. After all, spirituality and religion were no longer forbidden, and relations with the U.S. were getting stronger. Yet the crowds kept coming. And they still do today.

Performances generally sell out. Even though the beloved actor who played Nikolai for more than 20 years is no longer in the spotlight, they come. (Heartthrob Nikolai Karachentsov was in a serious car accident in 2005 that left him severely disabled from a traumatic brain injury.) Even though rock operas are no longer The Big Thing, audiences pay top dollar for tickets. Despite the simple staging, which is circa early-1980s style (think Godspell but with 19th-century, blousy costumes), theatergoers give standing ovations.

The show is now making its mark outside of Russia. A touring group under the composer’s direction, the Alexey Rybnikov Theater Company, has been taking the rock opera around the world. Recent venues include Israel and France. The Bay Area performances will be the show’s West Coast premiere.

“Thirty years ago, Juno and Avos challenged Russians to think beyond limits imposed by politics,” says Chermak Dillen. “Today it calls on Americans to understand a part of their own history, as seen through Russian eyes.”