Adjust Ticket Prices and They Will Come

Throughout the recent economic downturn, performing arts groups have been trying various methods of attracting new audiences and retaining established ones. At Cal Performances, the distinguished longtime arts presenter at UC Berkeley, Director Matías Tarnopolsky has instituted a new system with a proven track record.

It’s called dynamic pricing, and audiences attending concerts, recitals, and dance and theater events presented by the organization this season may have noticed the difference: The actual ticket price may be lower — or, in some cases, higher — than the one printed in their season brochures.

The system is part of a nationwide trend by arts presenters, who are beginning to reexamine ticket pricing, and, in many cases, to dramatically reduce the cost of single tickets so as to boost sales.

If that sounds paradoxical, Tarnopolsky, who was appointed to Cal Performances’ top post in 2009, says it’s the wave of the future.

“The idea was to be as responsive as we possibly can to our audiences, to really make sure that we have the right tickets at the right price for every pocket,” he says. “Our ticket buyers value not only where they might be sitting in the house, but also when they purchase tickets, and other factors, as well. Having a dynamic pricing system enables us not to be frozen in time in terms of the prices we set when our subscription brochures go out.”

Tarnopolsky, who came to Berkeley from administrative posts at the New York Philharmonic and the Chicago Symphony Orchestra, first got acquainted with dynamic (or “flexible”) pricing in Chicago, where the CSO has had a similar pricing system in place for years. He says the concept originated in the airline industry, where it remains common practice.

Tarnopolsky allows that there are significant differences between airlines and presenting organizations. “Of course, we’re not selling hundreds of thousands of airline seats,” he says. Yet “the business model sort of merged from there and made its way to other venues. Many other performing arts organizations around the country, around the world, have taken this approach.”

The data support this; according to a recent survey in Symphony magazine, orchestras such as the Baltimore Symphony, Cleveland Orchestra, St. Paul Chamber Orchestra, Miami’s New World Symphony, and the Evansville Philharmonic all employ some form of dynamic pricing. (The Bay Area’s own San Francisco Symphony does, too.)

The turn toward dynamic pricing is based on new economic realities. In the last decade, as personal income has declined, ticket prices have continued to rise. For many arts lovers, the cost of attending live performances has become prohibitive.

At Cal Performances, ticket prices are set well before the season begins. But Tarnopolsky says that dynamic pricing allows some “tinkering” as individual events approach. Demand is a big part of the equation: Prices can be adjusted, with the organization making additional blocks of lower-priced tickets available, as needed.

“Let’s say there’s a $45 ticket and a $65 ticket,” says Tarnopolsky. “There may be people who are interested in paying $55 for a slightly better seat than the $45 price, but find $65 too expensive. This [system] enables us to reach more people at the right price.”

Tarnopolsky is quick to add that the best method of securing optimum seating is to become a subscriber. “That’s always going to be the way,” he remarks. “If you want the best seat at the best possible price, then subscribe!”

Yet subscribers tend to be older, wealthier, and inclined to plan in advance. Younger concertgoers don’t think that way — and they’re part of the new audiences that presenters hope to cultivate.

For those and other single ticket buyers, dynamic pricing offers more options, and may even bring first-time concertgoers into the fold.

Tarnopolsky notes that dynamic pricing allows for a different response in individual situations. “It’s really on a concert-by-concert basis,” says the director. “If there’s high demand for a concert, then certain price-points may go up. If demand isn’t as strong, some price-points will go down.”

Demand can, in some instances, increase prices; Tarnopolsky cites the Vienna Philharmonic’s upcoming February appearances, for which ticket sales are already brisk. “It’s a very high-demand event,” he says, “and the more-inexpensive tickets are going very quickly.” In other events, audiences may find prices dropping.

The Appeal of Packing the Hall While Building Loyalty

While multiple benefits accrue from dynamic pricing, the chief advantage is filling seats, which is always the first goal of any presenting organization. “It’s all about making the performing arts as accessible as we can, to the largest possible audience,” says Tarnopolsky. “If we have prices that appeal to more people, it’s great for us and it’s great for our audiences.”

In other words, if the formula of “higher prices = lower attendance” holds, its inverse also may prove true: What an organization loses in ticket prices, it may gain in volume. And, in the long run, today’s single-ticket buyers may become tomorrow’s subscribers.

Still, dynamic pricing may amount to more than smart marketing: It also can have the effect of raising the organization’s profile. That’s a primary goal for Tarnopolsky, who started the 2010 season with Cal Performances’ inaugural ”Fall Free for All,” a daylong event that offered free performances by top artists in multiple venues. 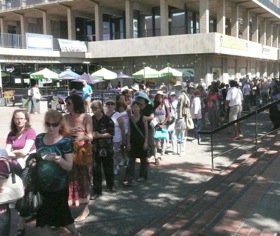 “That was a great way of raising the organization’s profile,” he says, “with the most economical ticket price: zero.”

While the “Fall Free for All” may remain a once-a-year event, Tarnopolsky is serious about making concerts accessible all season.

“What’s important,” he says, “is that we continue to have as many people as possible come and enjoy world-class performing arts — and that price isn’t a barrier.”

For now, he’s not predicting the outcome of the new system. But he’s willing to bet that dynamic pricing is a win–win for everyone.

“We’ll know more at the end of the season,” he says. “But so far, the results look promising. People are coming to our performances who otherwise would not have, and one of the reasons for that is well-targeted seat prices. There are many reasons, but we’re fairly confident that there’s a relationship between making ticket price adjustments and increased sales.”